Subscribe direct to our news source →
Finance Finance News Treasurer Josh Frydenberg surrenders to the recession 6:00am, May 13, 2020 Updated: 10:14am, Jan 18

Imagine fighting an economic war, firing $200 billion at the enemy, then surrendering just as you can see the tide of battle will turn in your favour.

That is what Josh Frydenberg did on May 12.

He ran up the white flag on high and lasting unemployment, wrote off the hopes and dreams of hundreds of thousands of Australians, gave up on the chances of millions more improving their living standards.

The Treasurer’s statement on the economy delivered in place of the federal budget usually handed down on the second Tuesday in May, amounted to a declaration that the government is bankrupt.

Not bankrupt financially, but suffering policy bankruptcy – a loss vision, a ticker vacuum.

With the official unemployment rate on its way to 10 per cent (with a real rate more like 20 per cent) and set to stay high for years, the Treasurer effectively declared the government would do no more.

The technical “recession” – two quarters of negative economic growth – will be over in the second half of this year, but the real recession – high unemployment – will last for years under present policies.

According to the Treasurer’s statement, after the JobKeeper subsidy and the extra JobSeeker payments finish in September, it’s too bad about the unemployed and struggling businesses.

From the “whatever it takes” attitude of the $130 billion JobKeeper announcement six weeks ago, the government told the 1.3 million Australians who will still be officially unemployed at Christmas they’ll have to take their chances with market forces and neoliberal doctrine.

Frydenberg gives up on the unemployed

After doing the right thing early in the crisis, pouring money into the economy to limit the extent of the recession, Mr Frydenberg has turned back Australia’s economic policy clock nearly three decades, promising to make the same mistakes that prolonged the pain of the early 1990s recession.

Mr Frydenberg’s surrender was all the more extraordinary because he spelt out the size of the crisis early in his statement:

“The IMF is forecasting the world economy to contract by 3 per cent this year. In contrast, during the GFC, the global economy shrank by just 0.1 per cent in 2009…

“Treasury is forecasting the unemployment rate to reach around 10 per cent, or 1.4 million unemployed, in the June quarter.

“Household consumption and business and dwelling investment are all forecast by Treasury to fall sharply in the June quarter.

“Household consumption is expected to be around 16 per cent lower.

“Business investment is expected to be around 18 per cent lower with falls concentrated in the non‑mining sector.

“Dwelling investment is also expected to be around 18 per cent lower.”

So having established that the economic shock was like nothing we’ve seen since the Great Depression, the Treasurer retreated from further action.

“While there will be a significant increase in government debt which will take many years to repay, our measures have been designed in a way that protects the structural integrity of the budget …

“Temporary and targeted, the new spending measures were not designed to go forever but to build a bridge to the recovery phase.”

Ah yes, Mr Frydenberg remains stuck on his “bridge” metaphor, labouring it in his statement and during question time.

As previously explained, it is false, misleading and simply wrong.

There is no bridge. Business has fallen into a deep hole, as demonstrated on May 12 by the latest NAB business conditions survey.

The NAB business conditions index plunged to minus 22 in March and fell further last month to minus 34.

Business confidence improved but remained abysmally low – twice as weak as it was in the 1990-91 recession. The forward-looking elements of the survey point further south. 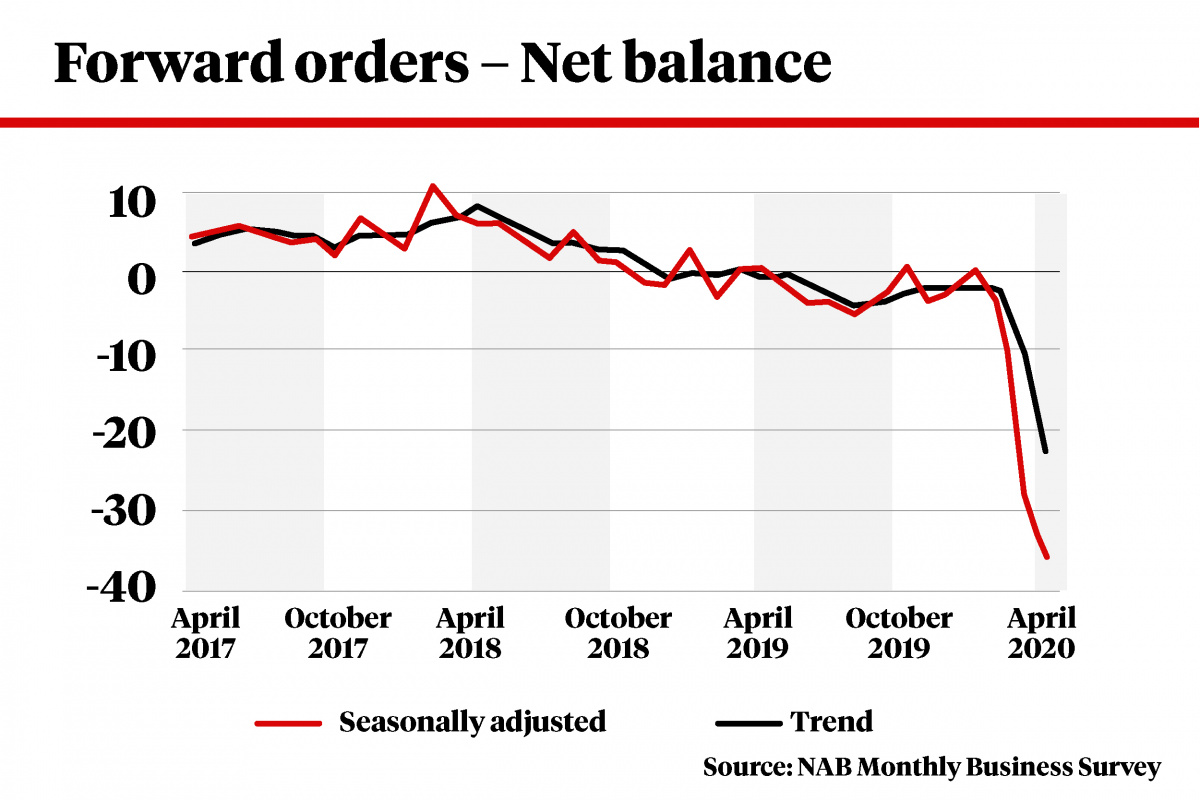 “Capital investment has also fallen sharply – and is at a very low level – suggesting that firms are pulling back on outlays where possible,” noted NAB chief economist Alan Oster.

(Part of the government’s first stimulus effort was aimed at stimulating business investment – the immediate and accelerated tax write-offs. They have had and will have no effect while conditions and demand remain bleak.) 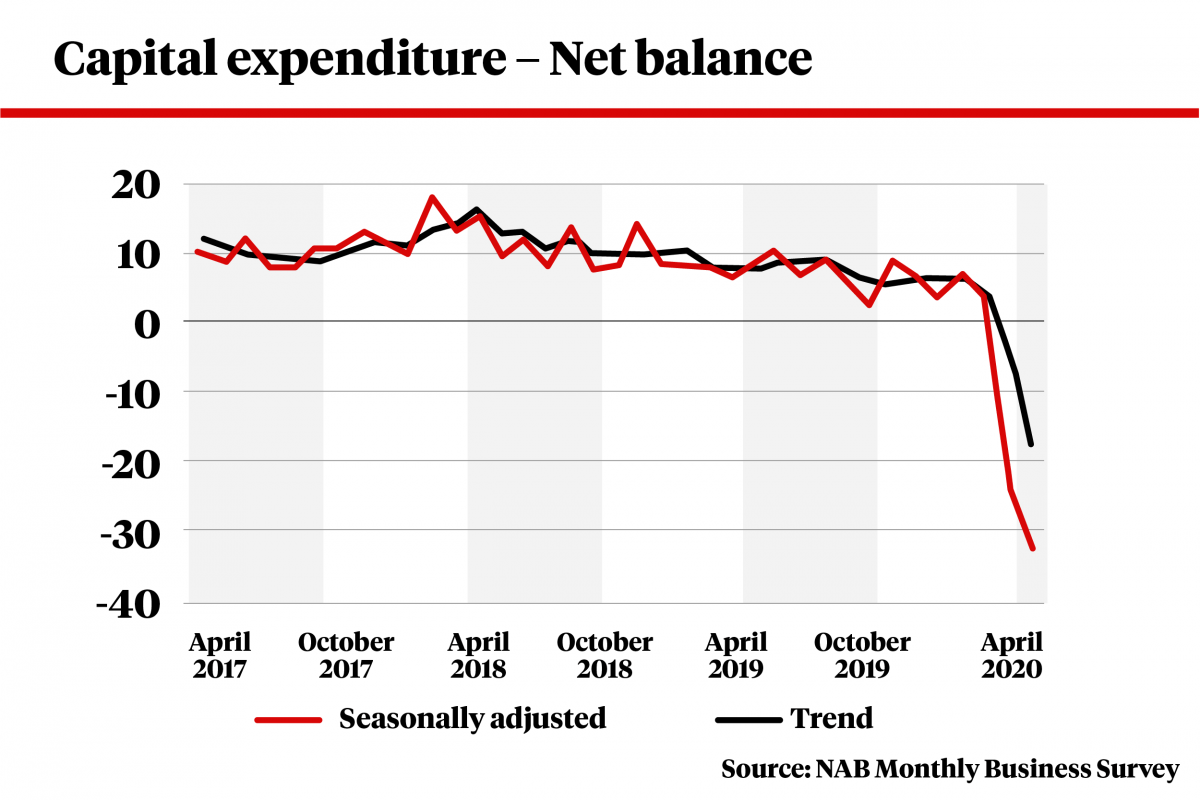 Mr Oster worries the hit to business confidence “will have some ongoing impacts to hiring and [capital expenditure], which could see a drag on growth for some time”.

“We see a recovery in growth late this year. But even though it could be a solid bounce, the level of output is not expected to be recovered to pre-COVID levels until early 2022,” he said.

We expect unemployment to match this pattern, falling in 2021 but remaining above 7 per cent. This all points to required ongoing policy support for some time.”

Unfortunately, that is not on offer from a government that has surrendered.

Beyond the safety-net-and-cushions phase, Mr Frydenberg retreated into the same rhetoric Liberal treasurers have been mouthing for seven years.

“Our focus will be on practical solutions to the most significant challenges which will be front and centre in the post-crisis world,” he told Parliament.

“Reskilling and upskilling the workforce, maintaining our $100 billion, 10-year infrastructure pipeline, cutting red tape to reduce the cost burden on businesses and the economy, and tax and industrial relations reform as a means of increasing our competitiveness.

“The values and principles that have guided Coalition reforms in the past must guide us again in the future: Encouraging personal responsibility; maximising personal choice; rewarding effort; and risk taking whilst ensuring a safety net which is underpinned by a sense of decency and fairness.

“Unleashing the power of dynamic, innovative and open markets must be central to the recovery, with the private sector leading job creation, not government.”

There is no better example of how empty the government’s policy cupboard is than those few paragraphs.

Faced with what he knows is the biggest economic challenge in 90 years, Mr Frydenberg isn’t even boosting the federal government infrastructure spend he announced a year ago when he thought the economy was booming.

It remains $100 billion spread out over 10 years. In real terms, it’s still about the same as what Joe Hockey announced in 2014.

As previously explained, trickle-down economics is dubious policy at the best of times.

When demand has been crushed, it’s simply nonsense.

Lowering business taxes a few points is irrelevant when there’s not the demand required to soak up excess capacity and produce a profit in the first place.

When it comes to tired political clichés, ‘cutting red tape’ has no equal.

And, as the University of Melbourne’s Professor Jeff Borland has explained, there is actually no basis for thinking that extensive reforms to the IR system can provide major efficiency benefits to the Australian economy at present.

In question time, Mr Frydenberg was asked when unemployment would return to its pre-COVID level.

Nobody can know the answer to that question yet, but he did say:

“We on this side of the House are doing everything we can to keep unemployment as low as possible.”

To put it politely, that is not true.

There are employment-creation options open to the government that would get more people back to work more quickly.

But from the comfort of his safe seat in federal Parliament, cosseted by conservative dogma, Josh Frydenberg doesn’t want to know and may be incapable of knowing.