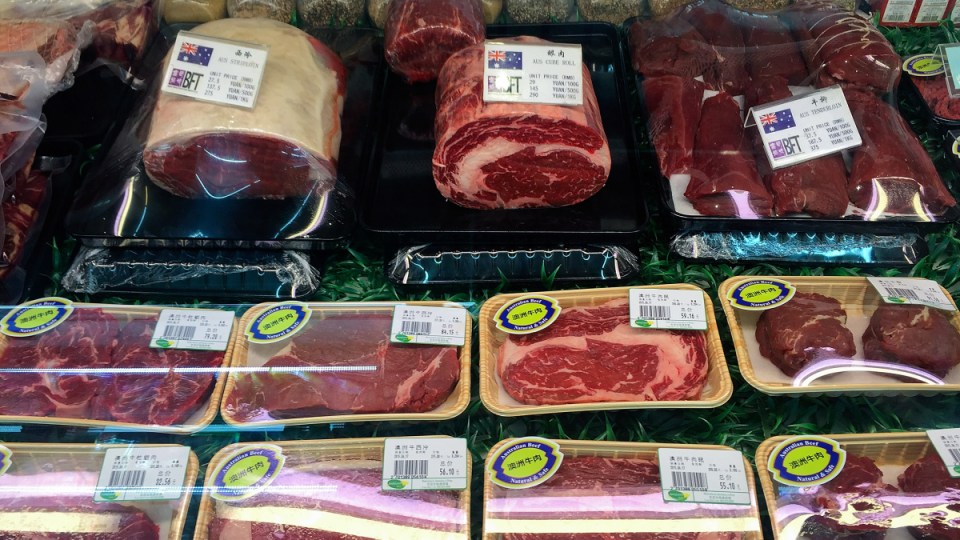 The federal government has been blindsided after China slapped an import ban on four Australian abattoirs in an apparent escalation of Beijing’s trade war tactics.

The blacklisting of the red meat abattoirs – three in Queensland and one in NSW – comes just days after China flagged plans to introduce an 80 per cent tariff on Australian barley, bringing the trade to its knees.

“It’s disappointing that no notification was given prior to that suspension taking effect today,” Trade Minister Simon Birmingham said on Tuesday.

One analyst has told the ABC the four meat works represent 35 per cent of beef exports to China, a trade that had been on track to reach $3.5 billion in 2020.

China is Australia’s biggest market for beef by volume.

The Australian Meat Industry Council has put the suspension down to labelling issues.

“While not desirable, we have dealt with issues of this nature before and are working closely with the commonwealth,” chief executive Patrick Hutchinson said.

“This is a trade and market access issue that is being led by the commonwealth.”

Mr Birmingham said he was working with the meat processers involved to rectify the labelling issues and get their permits reinstated.

“We are concerned that the suspensions appear to be based on highly technical issues, which in some cases date back more than a year,” he said.

“I’ve been speaking with industry leaders, colleagues and departments overnight to formulate a comprehensive response.

“We will work with industry and authorities in both Australia and China to seek to find a solution that allows these businesses to resume their normal operations as soon as possible.”

Earlier in May, Beijing’s ambassador warned Chinese people would reconsider buying Australian beef if Prime Minister Scott Morrison continue to call for a probe into the origins of the coronavirus outbreak.

In 2017, China banned imports from six Australian meat works, including the four processors caught up in the current ban, along with Australian Country Choice and Thomas Foods.

That ban related to Chinese concern about labelling non-compliance and took months of high level diplomacy to resolve, stalling beef production in the process.