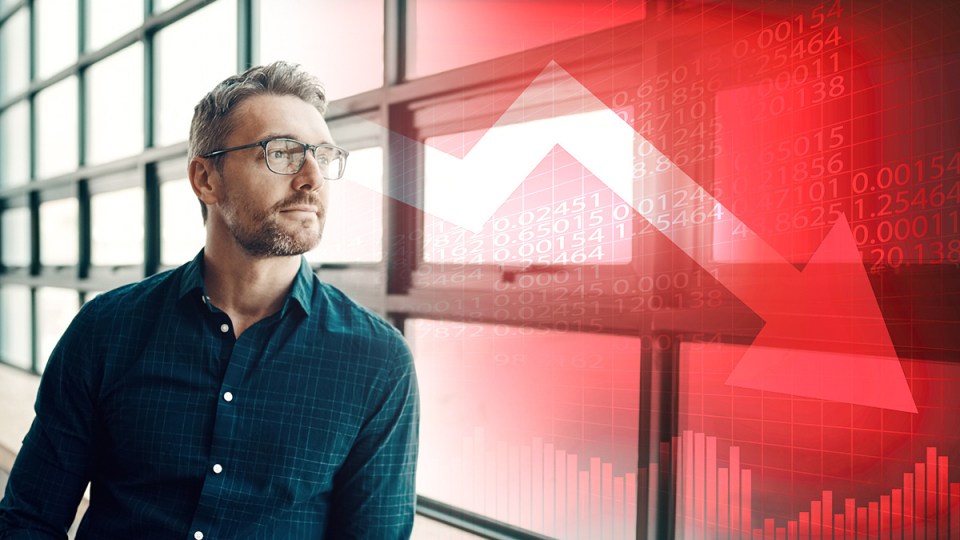 Business activity has collapsed to a record low – thanks to wide-ranging shutdowns and government restrictions – prompting economists to highlight the importance of re-skilling the workforce.

An index of private-sector activity recorded the worst result in its four-year history in April, with new orders dropping dramatically and companies shedding thousands of jobs as a result.

As the Prime Minister Scott Morrison revealed almost 590,000 Australians had applied for the unemployment benefit JobSeeker, Commonwealth Bank reported an “astonishing” decline in activity across Australia’s services and manufacturing industries.

A score above 50 in the bank’s Flash Composite Output Index shows industry is expanding; a score below 50 shows it’s contracting. 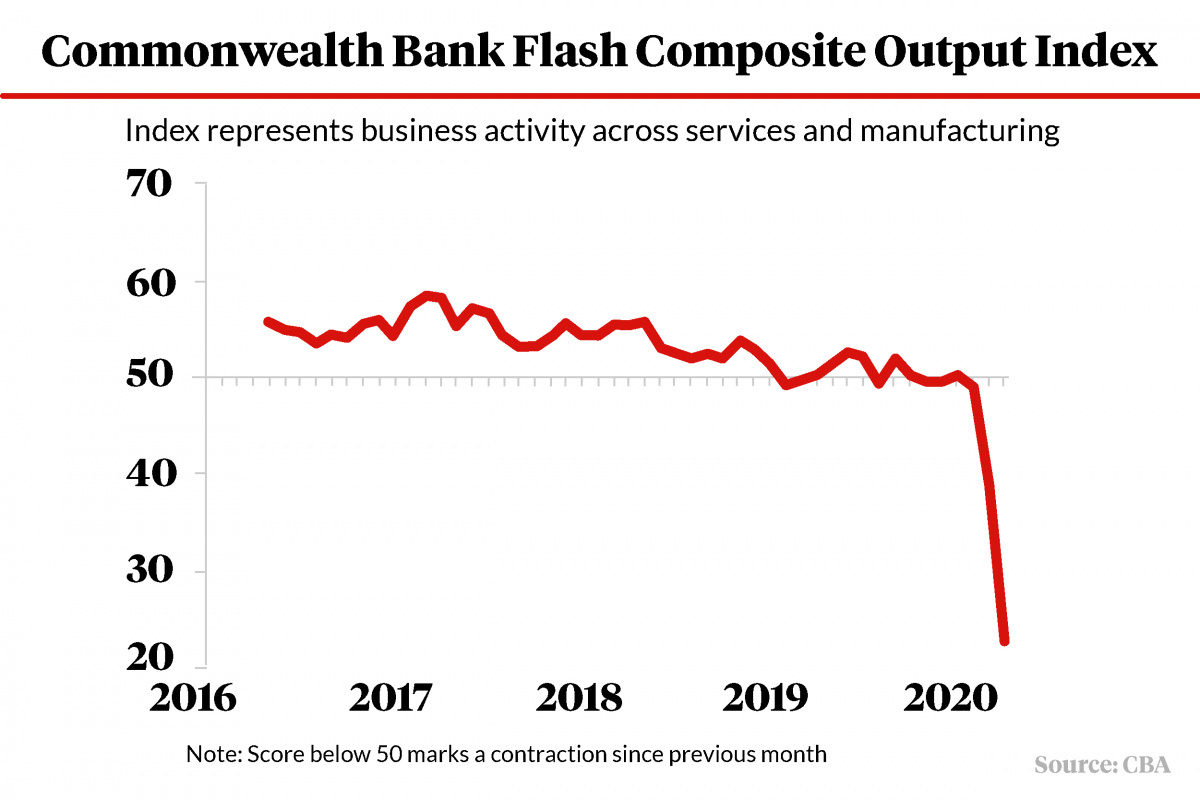 Manufacturing, meanwhile, fell by a more modest 4.1 points to 45.6.

But it was the sector’s eighth consecutive monthly drop, with economists telling The New Daily earlier this month that a focus on services-led growth in recent years had gutted the nation’s manufacturing capacity and left it highly dependent on imports.

“The services sector has been hit a lot harder than the manufacturing sector. And the pace of job shedding is concerning though not surprising given the large number of Australian businesses that remain shut.”

The manufacturing index is calculated based on output, new orders, jobs, suppliers’ delivery times and stocks of purchases.

The dire results support earlier ABS data showing that the coronavirus has hit accommodation and food services hardest, with arts and recreation services the second-hardest hit.

Single-touch payroll data shows the hospitality industry shed more than a quarter of its jobs (25.6 per cent) between March 14 and April 4, while the arts sector lost almost one in five (18.7 per cent).

Workers aged under 20 suffered the worst impact in percentage terms during those three weeks, with 9.9 per cent of jobs lost.

The coronavirus is reshaping the economy and triggering job losses on such a massive scale that skills and re-training will have to be a central pillar of government’s roadmap for economic recovery, according to UTS industry professor Warren Hogan.

He told The New Daily the government would need to take “a holistic view towards supporting investment and growth in industries that are emerging and will succeed in the future” – a broad strategy that could include business tax cuts, support for critical industries, skills and training programs, industrial relations reform, and major infrastructure projects. 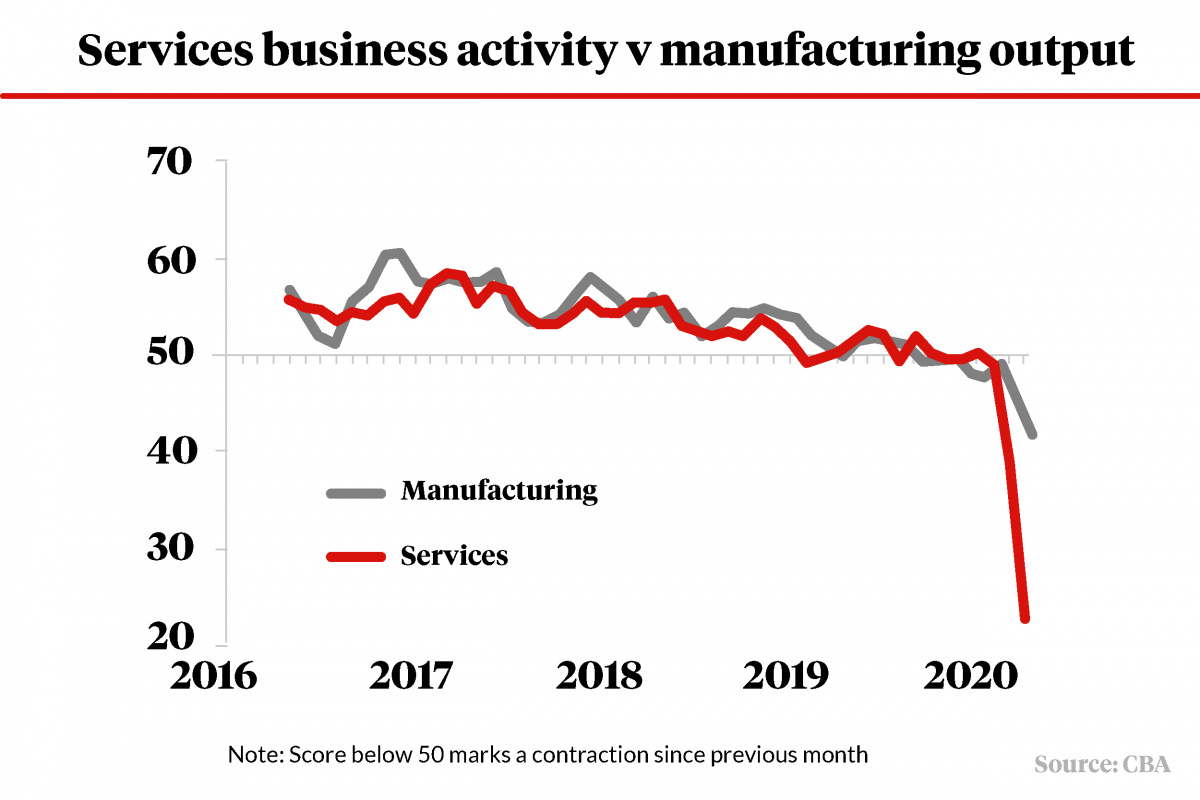 “One of the most important issues there is retooling the workforce, which is a story about, not just making sure people get a good education right through to the tertiary level, but it’s actually about being a lot better at offering skills training and skills development – up-skilling and re-skilling – and not just for existing workers of all ages, but for young people.”

“They treat both with the equal amount of structure and seriousness, about what those skills mean for society, so I think that’s one of the key things we have to think about: How to get our labour force ready,” Professor Hogan said.

“We then need to make sure that the operating environment for business is conducive to capital going out and investing and taking risks – and I think that involves a few of the things the [Reserve Bank] governor talked about, i.e. the right tax incentives, so not taxing incomes so much, which inevitably means you’re going to have to raise the GST.”

Business activity collapses to record low amid calls for reform