Subscribe direct to our news source →
Business confidence fell off a cliff after the coronavirus took hold.

The global economy is “very likely” expected to suffer the steepest economic downturn since the 1930s Great Depression, the International Monetary Fund has warned.

Australia is predicted to experience one of the worst economic consequences of the coronavirus outbreak, with our economy anticipated to shrink by as much as 6.7 per cent in 2020 alone.

That’s according to the IMF’s 2020 World Economic Outlook, which further predicted a partial rebound of 6.1 per cent in 2021.

As for the world economy, the IMF anticipates it could see a negative growth of 3 per cent in 2020.

“Assuming the pandemic fades in the second half of 2020 and that policy actions taken around the world are effective in preventing widespread firm bankruptcies, extended job losses, and system-wide financial strains, we project global growth in 2021 to rebound to 5.8 percent,” the IMF wrote.

The report said forecasts were marked by “extreme uncertainty” and that outcomes could be far worse, depending on the course of the pandemic.

The best-case scenario predicts $US9 trillion in output is wiped out in two years. That’s greater than the combined gross domestic product of Germany and Japan, IMF chief economist Gita Gopinath said.

The predictions follow NAB’s release of its business survey, which showed Australia is headed for a “recession of unprecedented speed” after business confidence plunged to its lowest level in history.

The sharp fall in confidence has been felt across all industries – with recreation and personal industries suffering the most. Big hits to jobs and profitability have driven down business conditions to their lowest level since the global financial crisis.

NAB chief economist Alan Oster said governments’ stimulus packages would support the economic recovery but were not enough to “offset the near-term pain”.

“We expect a recession of unprecedented speed and magnitude for the Australian economy over the next three quarters. This will see a sharp increase in unemployment,” Mr Oster said. 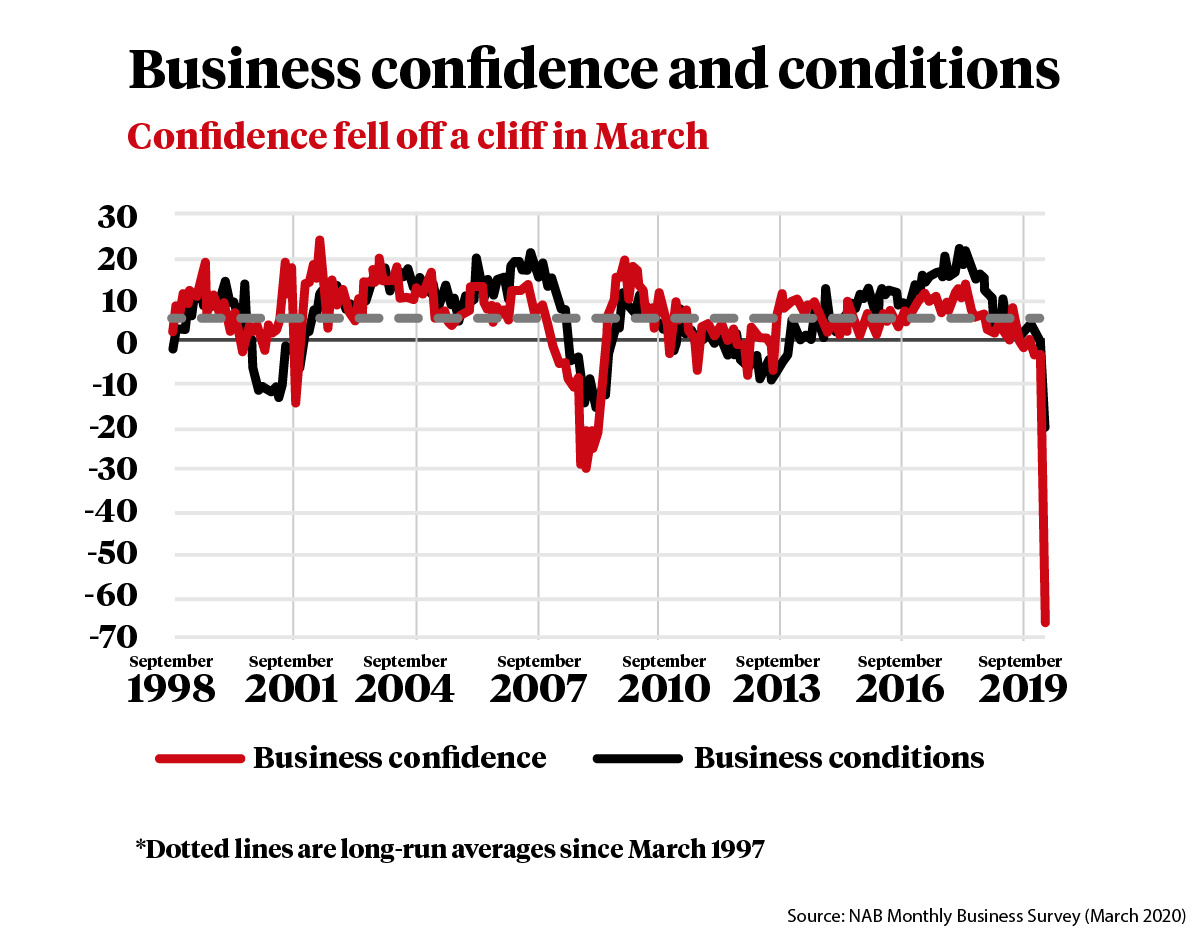 “For now, more businesses expect it to get worse before it gets better.

“It could well be that conditions fall to the lowest level since the 1990s recession in coming months.”

Forward orders and capacity utilisation also recorded their largest falls – suggesting the worst is yet to come.

He told The New Daily the government should provide more rental assistance to people experiencing financial hardship, and expand the eligibility criteria for the JobKeeper payment to include all casual workers and temporary visa workers. 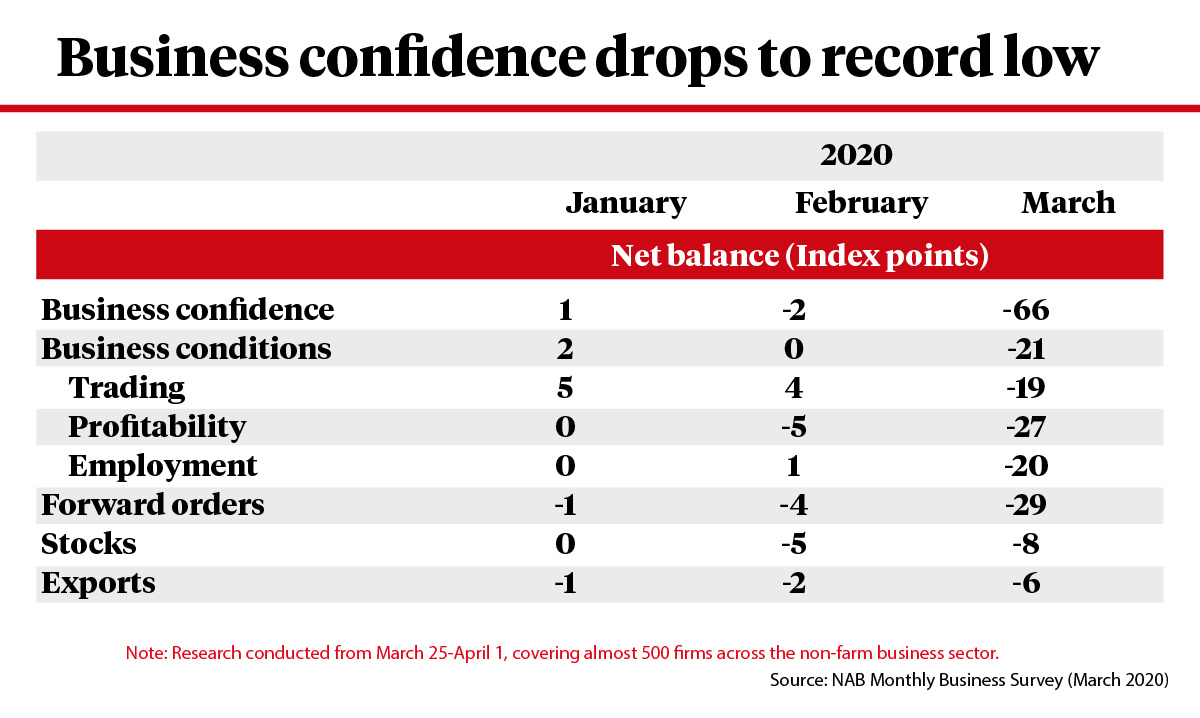 Treasurer Josh Frydenberg told ABC’s Insiders on Sunday the government had no plans to expand the $130 billion wage subsidy scheme to include all casuals as it would cost the federal budget an additional $18 billion.

But Mr Koukoulas said now was not the time to be “quibbling about $10 or $20 billion when you probably have GDP going backwards by 5 or 10 per cent”.

“I wouldn’t blame the government for one second about the recession that’s happening – that’s obviously a health crisis – but you can hold them to account for how deep and how protracted this is going to be, how many people are going to be unemployed, and how miserable the business sector is going to be,” Mr Koukoulas said.

IFM Investors chief economist Alex Joiner, however, said the government had to “draw the line somewhere” when asked if it should announce more support measures.

He told The New Daily the policies announced so far were large and well targeted.

“What I think [the government] wants to do is just walk through some of the issues with the policies it’s got in place, and then be in a position, when the restrictions are lifted, to add a little bit more stimulus into the economy as and when we come out of the health crisis – because the economy is not going to snap back naturally,” Dr Joiner told The New Daily.

“It will need a little bit of help.

“I think that’s really the next point for government to get involved – unless things deteriorate materially from here.” 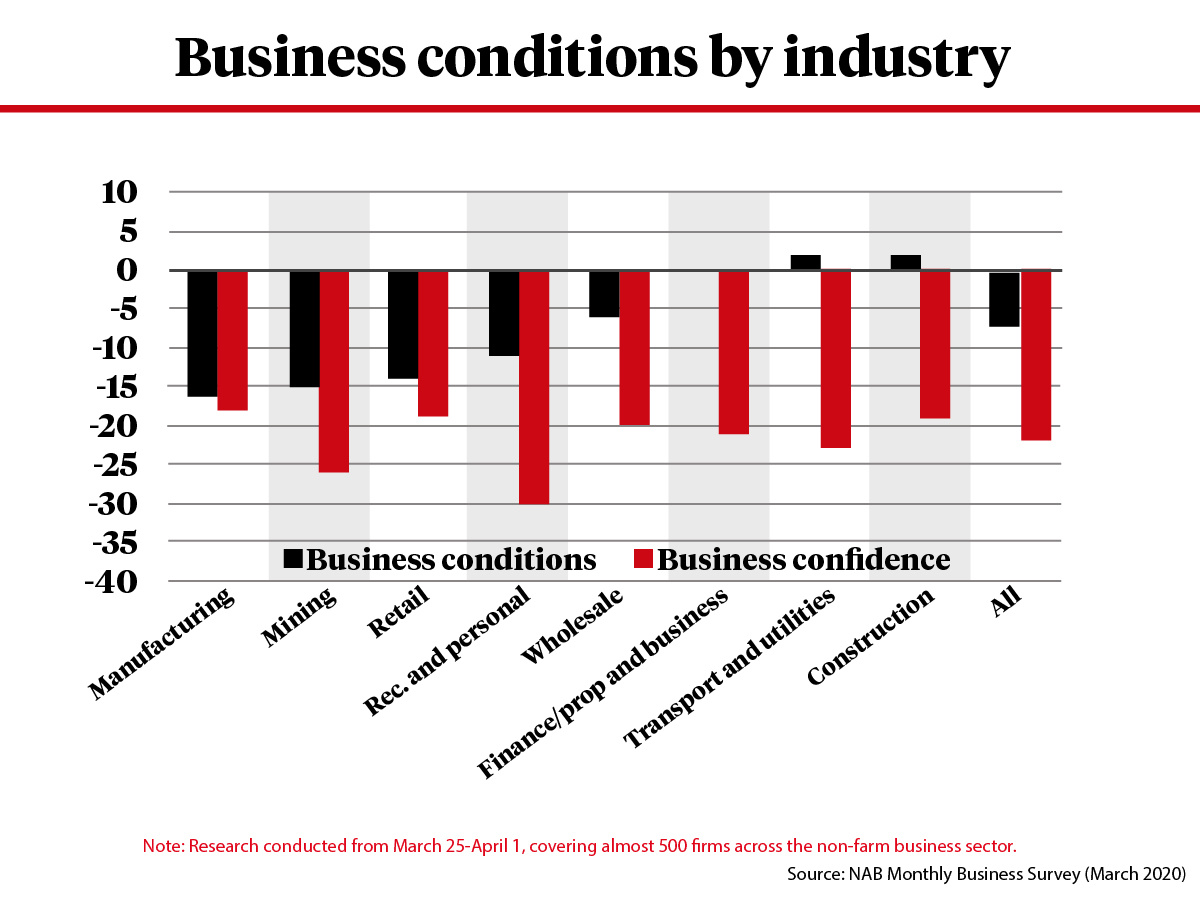 The massive fall in business confidence comes after Treasury released modelling forecasting Australia’s unemployment rate to jump from 5.1 per cent to 10 per cent in the next three months.

It said the nation’s jobless rate would have tripled to 15 per cent had the government not rolled out its $130 billion JobKeeper program.

But Mr Koukoulas said Treasury’s figures painted an inaccurate picture of the labour market as they ignored underemployment – when an adult is working less than 35 hours a week but wants to work more.

Mr Koukoulas said Australia’s underemployment rate, which last year never dropped below 8.1 per cent, could conceivably rise to 15 per cent during the coronavirus crisis.

That would mean a quarter of the workforce – or roughly 3.4 million Australians – would either be jobless or in need of more work.

So far, more than 800,000 businesses have registered for the government’s JobKeeper program.

From the first week of May, they will receive $1500 a fortnight for every worker they keep employed during the crisis – a payment they must pass on in full to stood-down workers.