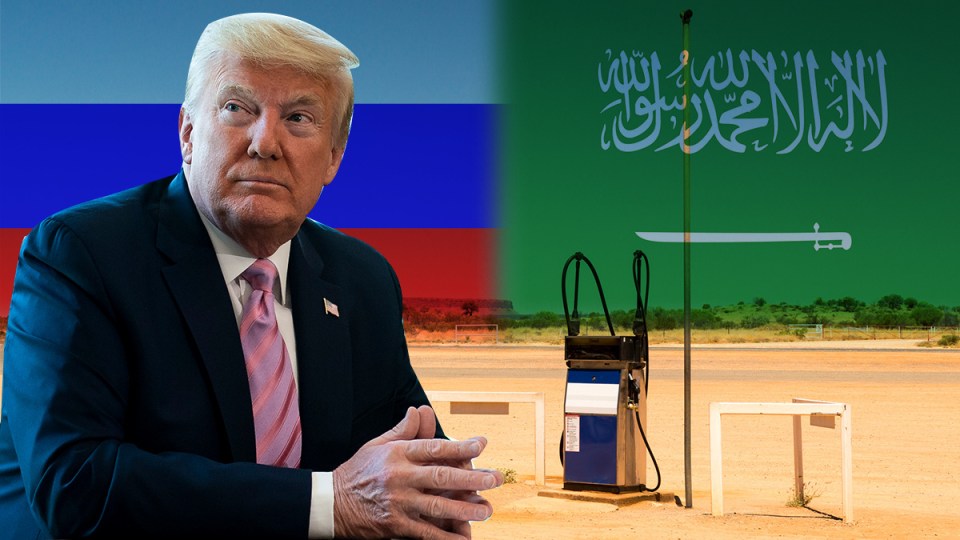 US President Donald Trump has helped broker a truce between Russia and Saudi Arabia. Photo: TND

Global oil producers have struck a historic deal to slash production by 10 per cent in a desperate bid to support tumbling oil prices.

The production cuts are the largest ever to have been agreed and bring and end to the month-long price war between Russia and Saudi Arabia.

Producers hope the 10 per cent cut, which is four times larger than the cut after the GFC and will eventually rise to 20 per cent of pre-crisis levels, will shore up global oil prices after collapsing demand pushed them to 18-year lows.

And banks Goldman Sachs and UBS predict the economic disruption caused by the coronavirus could force it down towards $US20 a barrel ($31.56) – meaning the deal is unlikely to push up prices at Australian bowsers.

Analysts believe the cuts won’t be enough to offset the estimated 30 per cent fall in global demand triggered by global measures to reduce the spread of COVID-19.

Around the world, factories have shuttered, airlines have ground to a halt, and governments have told people to stay in their homes as much as possible.

If it was a bigger cut “then you would’ve seen oil prices strengthen to $30 very quickly and that would be helpful for equity markets but we didn’t get that,” Peter Cardillo, chief market economists at Spartan Capital Securities, was quoted as saying by Reuters.

“The only new news here is that they did finally reach an agreement, but the 10 million was already [priced] in”.

Mr Cardillo added that the agreement would prevent global oil prices from hitting fresh lows but would not lead to a material increase, with the slight bump not enough to stop Asian shares from falling on Monday.

The Australian sharemarket was closed for the Easter weekend but will open again on Tuesday.

Others echoed Mr Cardillo’s view, while independent oil market analyst Gaurav Sharma told the BBC the market was unlikely to take the cuts at face value because, “for most of 2019, Russia displayed very poor form in complying with previously agreed Opec+ cuts”.

Perhaps more noteworthy than the cuts was the role played by US President Donald Trump in brokering the truce between Russia and Saudi Arabia.

Mr Trump reportedly played a crucial part in saving the deal after talks hit a roadblock when Mexico asked Saudi Arabia for an exemption.

The US President said on Twitter that the deal would save hundreds of thousands of jobs in the country’s energy sector.

NRMA spokesperson Peter Khoury told The New Daily at this point it looked as though the production cuts would have little impact on Australian petrol prices.

He said motorists could look forward to cheaper bowser prices as retailers had yet to pass on the full price drops seen before the agreement.

“In Sydney, Brisbane and Melbourne, the falls haven’t happened anywhere near as fast or as deep as they should, so there is still a long way to go in terms of petrol prices in those markets,” Mr Khoury said.

“The wholesale price is below 85 cents for regular unleaded, so that’s a pretty good indication that in the Australian market we still haven’t seen those prices flow on.

“With the exception of Adelaide and Perth, prices are still falling, and they’re falling slowly and should continue to fall.”

He added: “So this recent announcement – with the relatively small impact on oil prices so far – shouldn’t really affect prices in Australia.”

Read more: Drivers being gouged on fuel prices amid pandemic

The below average prices are courtesy of motormouth.com.au and were current as of April 12. Motorists can find out whether prices are falling in their city by visiting the ACCC’s page on petrol price cycles.