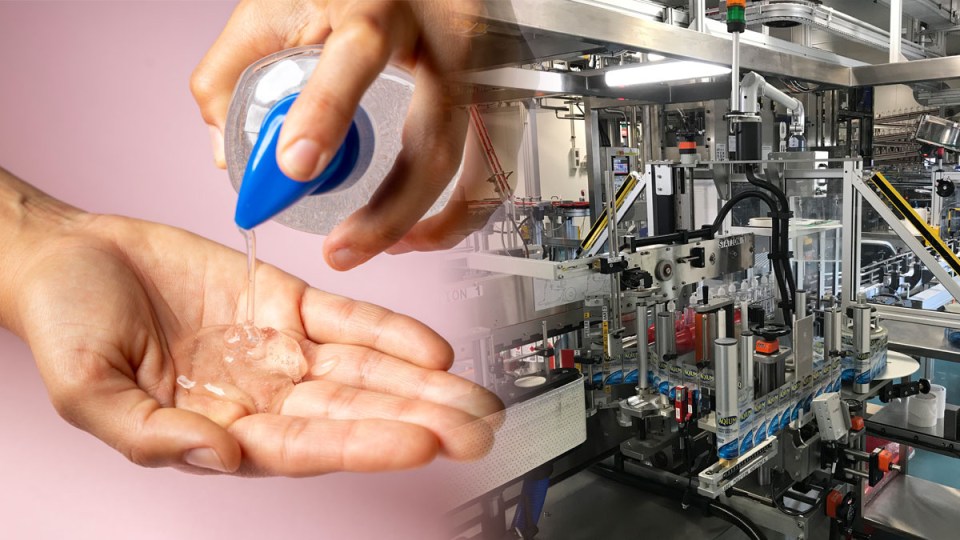 As the demand for hand sanitiser soars, so too is the pressure on local manufacturers. Photo: Getty/TND

Alan Oppenheim wonders how global events will affect his business every time he passes the Ego Pharmaceuticals logo that overlooks the EastLink tollway.

Mr Oppenheim is the managing director of Ego Pharmaceuticals – the company that has produced Aqium hand sanitisers since 2001 – and says demand has far outstripped what was seen during the SARS and MERS outbreaks.

With the product in such high demand, a fledgling cohort of local distillers and repurposed manufacturers has helped bolster the fight against the novel coronavirus.

And recognising its crucial role as an industry mainstay, Ego’s production has scaled up five-fold.

The company is now operating around the clock, six days a week – pumping out 90,000 60ml packs per day for the medical and pharmaceutical sectors.

Although the production line is largely controlled by automated software imported from Germany, 300 workers oversee the day-to-day operations across three shifts at a factory in Braeside, in Melbourne’s south east.

General anxiety related to the pandemic is naturally weighing on workers’ minds, but Mr Oppenheim said there’s a “positive buzz” prompted by the urgency of the task at hand.

“The onus of responsibility on us is always huge, but now it’s so much bigger,” Mr Oppenheim said.

“We realise so much is depending on us and we need to not only be keeping hands clean and help saving lives, but when people are stressed, most diseases tend to get worse.”

The unprecedented levels of production prompted a recent recruitment drive for engineers, electricians and fitters – extra workers needed to switch to a six-day roster and safeguard the production line’s integrity.

“There are other brands that we are losing out on simply to get the maximum possible Aqium [into the public] that we can, bar none, to service the needs of the country.”

Why supermarkets ran out of hand sanitiser

Defying the huge upscale in production, consumers across the country are still reporting critical shortfalls in hand sanitisers.

Woolworths and Coles supermarkets have placed signs informing shoppers of the shortage and implemented a limit of two items per customer.

But he said the main priority was servicing frontline workers.

“Our supplies are focused on hospitals and aged-care facilities, and we’re actually increasing the percentage of products going to those facilities in light of this outbreak,” Mr Oppenheim said.

Our healthcare contracts normally receive 50 per cent of our production – but they will be prioritised even further. And we’ll be communicating to pharmacies to prioritise staff, nurses, and vulnerable customers like the elderly.’’

But as more countries enter restrictive lockdowns that stymie global manufacturing, the supply of raw materials like ethanol has fallen off a cliff.

Mr Oppenheim said the combination of reduced international supply and overwhelming local demand is one of the biggest challenges his company has ever faced.

“The demand is absolutely there, it’s infinite,” Mr Oppenheim said.

“But the scary thing is the raw material supply issues keep changing every day – some days it might be raw materials becoming unavailable from the United States or Europe or India. It’s changing constantly.”

Mr Oppenheim said the Department of Foreign Affairs and Trade has since intervened to guarantee the supply of hand sanitiser for the medical sector.

“We live in this global village and everyone’s helping each other, and Australians have benefitted hugely,” Mr Oppenheim said.

“Overseas officials are working to try to get [our suppliers] to prioritise particular raw materials so we can continue supplying hand sanitiser.”

Federal Minister for Industry Karen Andrews said manufacturers like Ego Pharmaceutical are displaying remarkable tenacity amid the challenges of a nationwide lockdown.

“Australian manufacturers have shown incredible resilience, inventiveness and a willingness to collaborate to help Australia get through this pandemic,” Ms Andrews said.

“This is a Team Australia moment and as a government we’re doing everything in our power to drive domestic production of essential medical supplies, while securing what we can that’s on the market.”

Inside the Melbourne skincare company ramping up its hand sanitiser production