There’s a quicker and easier way to reduce mortgage stress than the touted six-month moratorium: End the bank-imposed penalty on interest-only (IO) loans.

Someone moving from a 3.5 per cent variable PI to 2.29 per cent fixed IO would see their monthly cash flow improve by $1291.

A six-month moratorium means the money owed increases as the interest component is capitalised – it’s added to the total.

Although it kicks the mortgage can down the road for six months, it makes the can bigger and it still has to be faced quite soon.

Moving to an IO loan at no penalty also kicks the eventual repayment of principal down the road, but it’s considerably further without increasing the debt.

There’s much more chance our present crisis will have eased in two years than in six months.

For someone with no or extremely little income, there may be no option but to ask for a moratorium, but if a household’s income has not been too drastically reduced, moving to IO is likely to be a more sustainable and less stressful choice.

It also should be better from the bank’s point of view.

Contact is maintained with the customer, loan exposure does not increase, and there is less chance of the loan becoming impaired.

And the same logic applies to investors’ loans.

Investors on average presently pay a higher interest rate than owner-occupiers for mortgages, as well as a premium for IO loans.

Allowing investors to move to IO loans on a level playing field would/should enable them to treat tenants in financial stress better during this recession.

There were good reasons for APRA (with urging from the RBA) to crack down on the level of investor and IO loans at the time.

Now the times are extremely different.

Back then, authorities were concerned about deteriorating bank lending standards and poor data being kept by banks and other deposit-accepting institutions (ADIs).

“This share was high by both historical and international standards.

“The high level of interest-only lending was a particular concern in an environment of rising household indebtedness, modest wage growth and with the prospect of interest-rate rises at some point in the future, which could leave these borrowers particularly exposed relative to borrowers who have been paying down the principal on their loans.

APRA hit ADIs with tough limits on the growth of investor and IO loans – limits that the banks used higher interest rates to enforce, and which required higher credit standards.

This graph from the RBA’s October 2018 Financial Stability Review demonstrates how quick (and happy) the banks were to whack on higher rates.

From no penalty at all, investors were soon paying an extra 1.05 percentage points for their IO money. 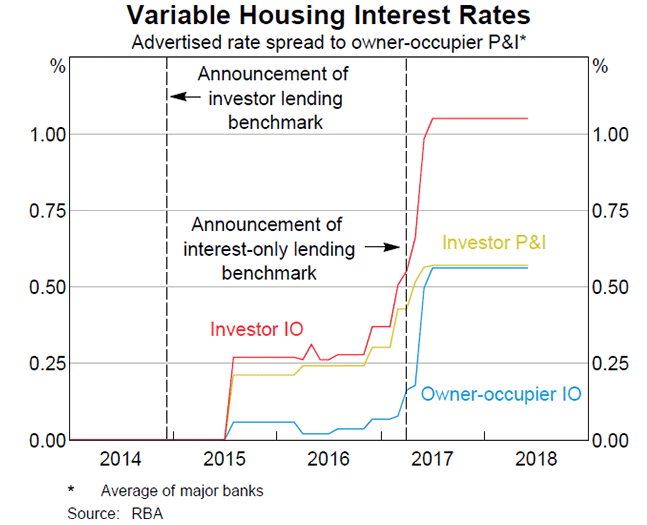 The penalty for IO loans has since tightened but varies greatly between banks and individual products.

What banks advertise and what they actually charge are two very different things.

It’s made harder by some banks’ websites not yet having caught up with their 2.29 per cent two-year, fixed rate PI offering.

However, from a quick sampling of two banks’ websites on Sunday, the IO penalty seems to range from about 25 basis points to 70 basis points, depending on the product.

The prudential reason for the penalty being introduced no longer exists.

APRA and the RBA would now serve the country well by leaning on banks to immediately scrap it.

This could be a near-immediate initiative, unlike most of the emergency measures so far announced by the government.

(How are those bushfire funds going? How long does it take a newly unemployed person to receive a social security payment?)