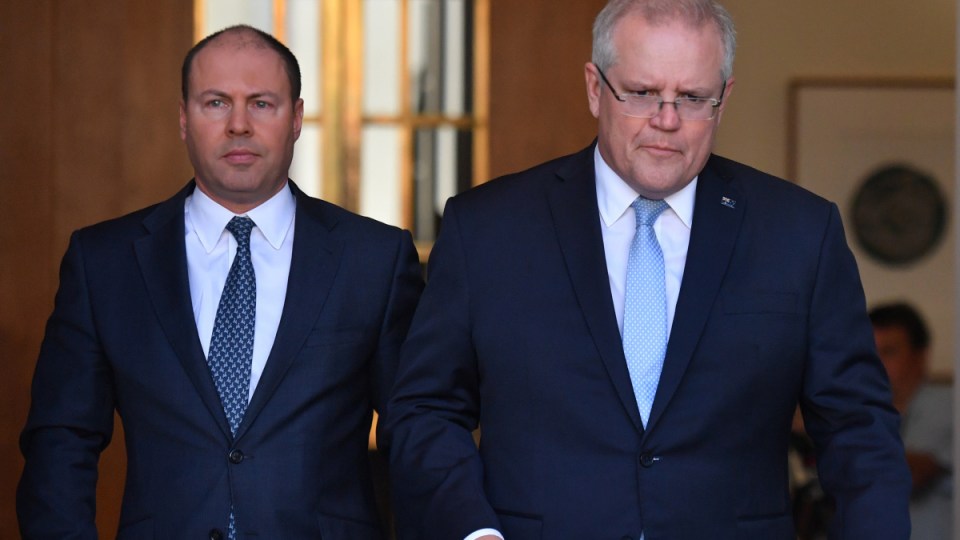 The federal government has temporarily doubled the unemployment benefit as part of a $66 billion package aimed at softening the blow of the coronavirus.

The extra $550 a fortnight will come in the form of a “time-limited coronavirus supplement” that is paid to affected workers and existing recipients of the JobSeeker payment, which was formerly known as Newstart.

It is one of a series of measures announced on Sunday that takes the combined value of the economic support provided by the Reserve Bank and federal government to $189 billion.

Most of that funding, however, comes in the form of loans to businesses and consequently depends on firms wanting to borrow money.

After acknowledging that the “economic shock” would be “deeper, wider and longer” than previously thought, Treasurer Josh Frydenberg said the “announcement will provide hope and support for millions of Australians at a time when they need it most”.

He said the government would “continue to do what is necessary” and gradually increase its spending as and when the situation required it.

Shadow Treasurer Jim Chalmers said the stimulus would take too long to reach those in need and the support for business was not conditional on firms keeping on their staff.

The coronavirus supplement is available for casual workers and sole traders who have lost hours and income; full-time employees who have been temporarily stood down; and those already on income support.

It has a maximum rate of $550 a fortnight and will be made available to both new and existing recipients of the JobSeeker payment, the Youth Allowance jobseeker, the Parenting Payment, and the Farm Household Allowance and Special Benefit.

The supplement will be paid for six months.

Single workers who are eligible for the JobSeeker payment will receive the coronavirus supplement on top of that – meaning they will receive $1681.40 a fortnight if they are entitled to the full unemployment benefit.

The government has waived the payment’s asset test and waiting period. But the payment will have an income test – those earning up to $1075 a fortnight will be eligible for the full $550 supplement.

The scheme will cost the budget $14.1 billion over the forward estimates.

The government will automatically deposit an additional $750 in the bank accounts of five million Australians from July 13, 2020.

Eligible recipients do not need to apply for the payment.

It comes on top of the $750 announced on March 6, which will be paid from March 31, with almost half of the cash going to pensioners.

The measure will cost the budget $4 billion over the forward estimates.

Financial hardship rules will be relaxed to allow easier access to superannuation balances for workers who have lost 20 per cent of their hours or income as a result of the coronavirus.

The measure will allow eligible individuals to access up to $10,000 of their superannuation balances this financial year and $10,000 next financial year by applying through their myGov tax accounts.

The money will be tax-free and will not affect CentreLink or Veterans’ Affairs payments.

The measure is expected to cost the federal budget $1.2 billion over the forward estimates period.

The Treasurer said it would affect less than 1 per cent of the sector’s funds under management and put $27 billion back into people’s pockets.

The government has temporarily halved the minimum amount of cash retirees must take out each year from their superannuation funds.

The minimum annual drawdown rate – for retirees aged under 65 – has now dropped from 4 per cent to 2 per cent.

Rates for other age groups have also halved.

In another win for retirees, the deeming rate will be slashed by another 0.25 percentage points after the RBA sliced interest rates to another record low on Thursday.

The measure is expected to cost the budget $876 million over forward estimates.

Small and medium-sized businesses (SMEs) and not-for-profits with an annual revenue of less than $50 million will receive up to $100,000 in cashflow assistance.

The payment is tax free and is handed out as a refund on 100 per cent of the tax withheld on their employees’ salaries and wages, up to a value of $100,000.

It will be automatically paid via the ATO and benefit 690,000 businesses employing around 7.8 million people. Businesses will then be able to spend the money on whatever they like.

Businesses that do not need to withhold tax are eligible for a minimum payment of $20,000.

Together with the wage subsidy included in the first package, the measure is expected to cost the budget $31.9 billion over the forward estimates.

Following on from the government’s announcement of $15 billion in funding for banks to on-lend to affected businesses, and the Reserve Bank’s $90 billion funding facility for low-interest loans for lenders helping SMEs, the Treasurer announced another round of business loan support on Sunday.

The federal government will guarantee 50 per cent of new loans issued by eligible lenders to SMEs, up to the value of $20 billion.

The announcement comes after the banks offered small businesses a six-month holiday on their loan repayments.

Learn more about the support available for businesses here.

Insolvency and bankruptcy laws have been relaxed during the outbreak of coronavirus.

The threshold at which creditors can issue a statutory demand on a company will increase from $2000 to $20,000 and companies and individuals will now have up to six months to respond, not 21 days.

Meanwhile, directors will be temporarily afforded zero personal liability for trading while insolvent.

Support for the aviation sector

As previously announced, the government will also waive $715 million in fees and taxes for the struggling aviation sector.

Although industry experts have said the funding won’t be enough to prop up the airlines given the huge amount of debt they carry, the Treasurer said on Sunday that nationalisation of the airlines was not on the table.