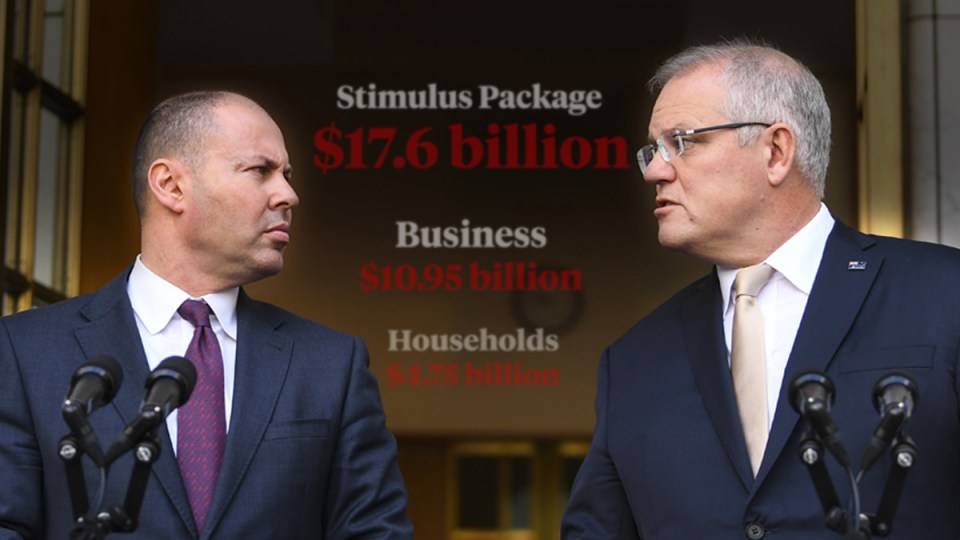 Scott Morrison and his Treasurer Josh Frydenberg are dropping cash on the economy.

Just weeks after claiming he would hold onto the Coalition’s prized budget surplus, Prime Minister Scott Morrison has launched a $17.6 billion spending spree to prevent a recession.

The spending will go in two directions, with business getting $6.19 billion between now and June 30, and welfare and pension recipients getting another $4.5 billion over the same period.

Vulnerable regions will also get $1 billion in two years, and the overall business spend will be $10.95 billion by 2021.

It would “focus on keeping Australians in jobs and keeping businesses in business so we can bounce back strongly.”

And there could be more on the way.

Mr Morrison left the door open for another bite at the stimulus cherry by describing the package as “scaleable”.

Taking a leaf out of former prime minister Kevin Rudd’s playbook, the government will send a one-off payment of $750 to all 6.5 million people on Newstart and full and part pensions, which is one in four Australians.

The government will deposit the money directly into people’s bank accounts without recipients needing to apply.

The payment is less than the $900 Kevin Rudd doled out 12 years ago but Paul Versteege, policy co-ordinator at the Combined Pensioners and Superannuants Association, said it was a positive move.

The government estimated it would benefit 900,000 people by an average of $219 a year, but Mr Versteege questioned that figure.

He said many people counted would not actually be on the pension.

All the payments are tax free and will not count in pension income tests.

The government has aimed most of its stimulus at businesses, on the premise that subsidising jobs and investment would be a more effective way of boosting the economy than targeting household budgets. 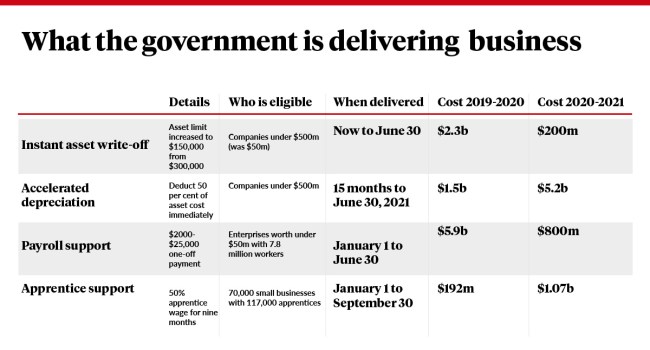 More businesses will get bigger tax incentives to spend on capital equipment.

The instant tax write-off for business assets will be increased from $30,000 to $150,000 and the measure will be available to businesses turning over under $500 million compared to $50 million previously.

But businesspeople need to get in quickly as the deal runs out on June 30.

“Business will take advantage of it,” he said.

In another move aimed at investment, businesses under the $500 million threshold will be able to claim half of the cost of a business asset as an instant tax deduction.

The rest of the cost will be depreciated under existing schedules.

That also has a limited timeframe – only applying to spending before July 1, 2021.

The two measures would apply to 3.5 million enterprises employing 9.7 million people, and will inject $3.9 billion into business by June 2021.

To help support payrolls and prevent layoffs, the government pledged to provide between $2000 and $25,000 to businesses worth less than $50 million who have employees.

The payment will be made this financial year and is expected to cost the budget $6.7 billion over two years.

Businesses employing apprentices and trainees will also get a boost with a pledge to pay 50 per cent of wages for up to nine months to September.

The measure will cost the budget $1.3 billion and support the jobs of 117,000 apprentices and trainees.

None of the wage support measures require employers to make complicated applications and will be handled through the tax system.

Independent economist Saul Eslake said the personal measures would account for about 1 per cent of GDP.

“I think it’s probably enough and they have said they have the ability to scale it,” he said.

“I’d question one element and that is giving the investment allowances straight away.

“It would be probably better to do that when the first stage is over because to use them firms would have to divert cash from employees to investment.”

Mr Eslake added: “Also most investment items would have to be imported and might not be available due to supply chain interruptions.”

Mr Strong acknowledged that but said “we all get that it’s a crisis. We don’t make bulldozers or computers here but buy them locally”.

How Scott Morrison will spend his $17.6 billion stimulus package