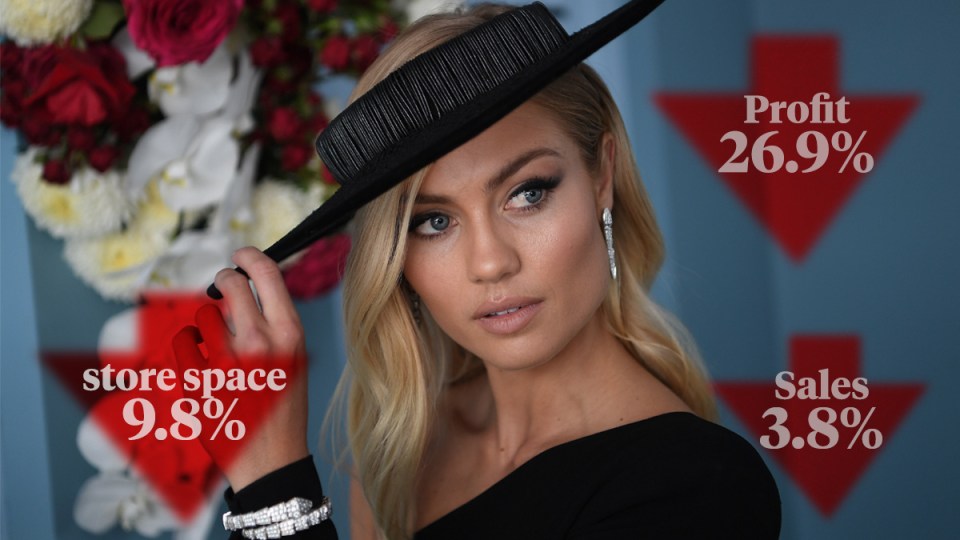 The glamour of Myer's womenswear offer has been dulled by Country Road's defection.

Myer is struggling to find a place to make money despite having 59 stores and a growing online presence.

That means, for every dollar that comes into the door, only 2.2 cents finishes up in the till, after costs are taken out.

Given that shareholders are not receiving dividends, the share price has fallen from $4.10 in 2009 to a record low of 33.5 cents on Thursday, and the bank will pay 1.5 per cent on money just sitting in an account, you could be forgiven for wondering why they keep the doors open. 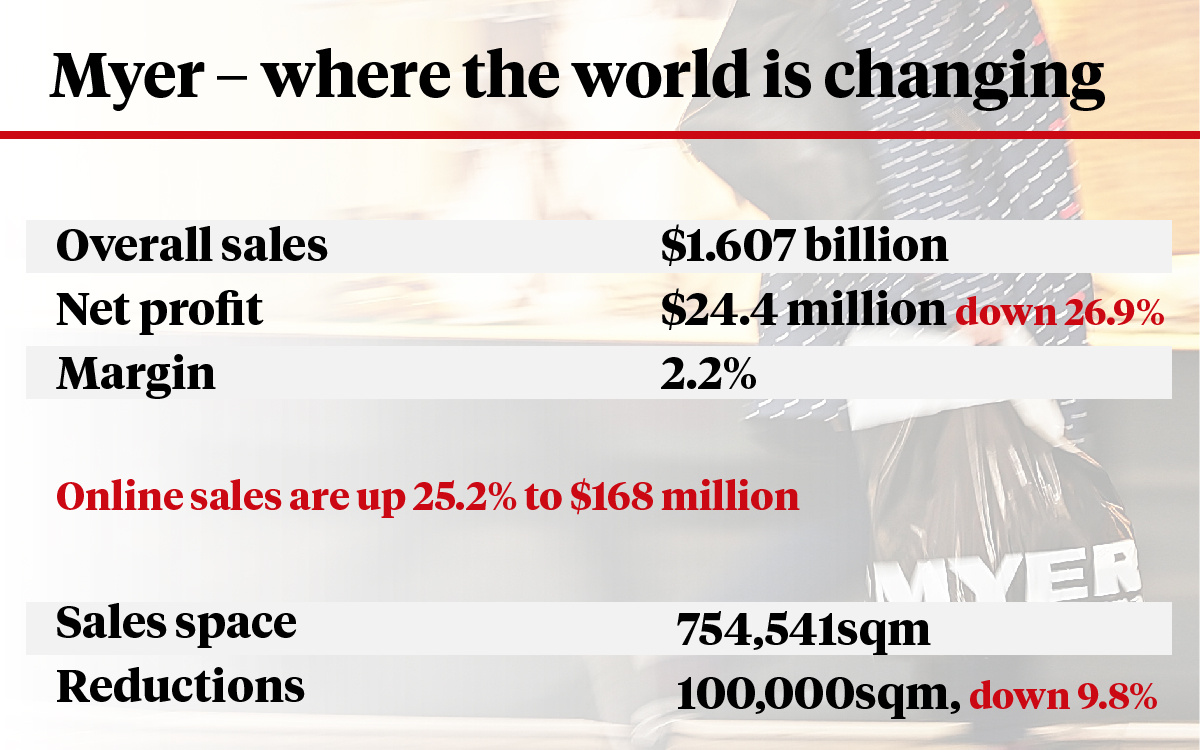 Earnings before financing costs were flat and CEO John King admitted “a disappointing performance in womenswear,” which is the mainstay of the group’s morale and hopes for the future.

The defection of Country Road to an exclusive presence in arch rival David Jones was noted as one of the drivers of the disappointment.

“The result was not inspiring. Sales in comparative store numbers were flat and there has been a concerning drop in profits,” said Gary Mortimer, retail specialist at Queensland University of Technology.

Department stores are locked in a pincer movement of social change.

“We’ve not been optimistic about department stores for a long while now,” said Brian Walker, principal of research house Retail Doctor.

“There are too many department stores for not enough demand.”

Between them, David Jones and Myer have 104 stores and plans over the short term to cut floor space by 20 and 10 per cent respectively.

The proliferation of boutique chains and single-category stores, along with the rush online, has eaten into their profits.

To deal with that, department stores are struggling with their landlords to close or drastically shrink unprofitable stores away from city centres and develop an internet presence commensurate to their old street front cache.

Myer is behind on the web, reporting a 25.2 per cent jump in online sales last half.

It now accounts for 10.5 per cent of total sales, or $168 million, about the same as David Jones.

But “Myer only grew its online sales by 25.2 per cent in the half compared to 61.8 per cent for David Jones and about 30 per cent for Coles and Woolworths,” Mr Mortimer said.

Both companies plan to push online to 20 per cent of total sales in the next few years.

Online not so hot

Despite the digital transformation, online sales are not the panacea to the bricks-and-mortar doom and gloom.

“It took 14 years for Amazon to make a profit and (British group) ASOS is not profitable,” Mr Walker said.

“Online is costly as there is freight, returns and you have to change the distribution system radically,” Mr Walker said.

“Returns are the killer because the freight is often free and you have to discount returns or sell them as used.”

According to Australia Post’s yearly e-commerce report, almost one in five goods (19 per cent) bought online in Australia is returned.

US retail returns company Optoro estimates only 10 per cent of returned goods make it back to the shop shelf so “the retailers have just been copping it,” Mr Walker said.

Myer is struggling to build its cache in the womenswear sector.

The loss of Country Road is obviously a major blow given that David Jones are using them as a brand driver.

“Country Road walked away because they lost confidence [in Myer] as a valuable base to operate from, and the same must be true of Apple,” Mr Walker said.

The group is also struggling to get over past mistakes with Myer’s Mr King saying an unwanted stock clearance “cleared stock that would have taken 18 months to sell in eight weeks”.

It was most likely sold below cost to achieve that.

That stock was largely what had been destined for the clearance floor under previous CEO Richard Umbers.

“It didn’t work as it brought the wrong kind of customer, bargain shoppers,” Professor Mortimer said.

Myer needs to be selling premium product to premium shoppers to succeed, he added.

And there are more headwinds to come.

Mr King told shareholders there had been little noticeable effect on sales from the bushfires, but he said “coronavirus is likely to affect CBD stores in Melbourne and Sydney, along with stores like Chatswood in Sydney and Chadstone and Doncaster in Melbourne”.

The amazing, shrinking ‘My Store Myer’ is looking for a space to make money