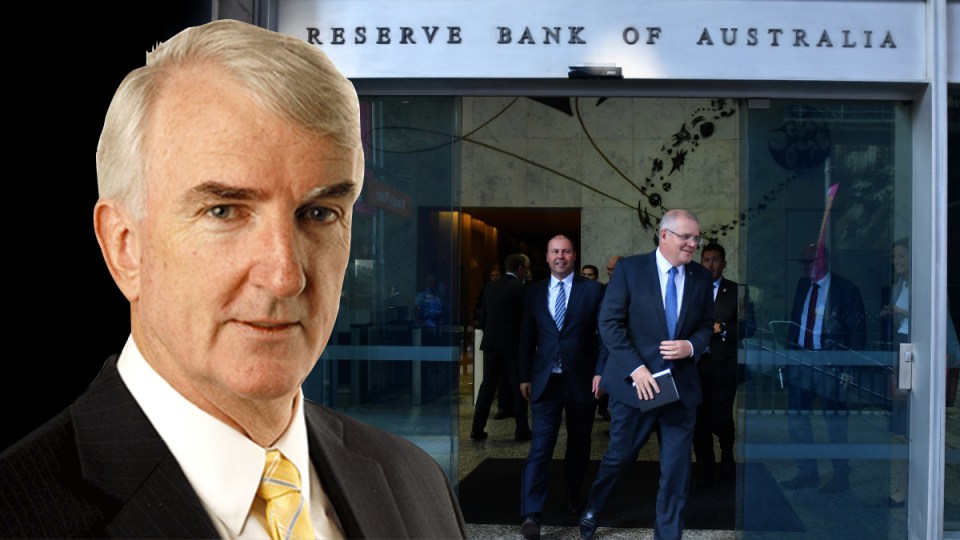 The government's leaking of an RBA briefing is symptomatic of an administration whose first instinct is to fib. Photo: TND/ AAP
analysis

Contrary to Thursday’s front-page report in The Australian, it’s not all that uncommon for Reserve Bank governors to provide federal cabinet with a confidential economic briefing.

What is uncommon, unique even, is for the government to disparagingly leak about the briefing to the LNP Gazette.

It smacks of a rattled and insecure government playing political games with the RBA, desperate to undermine the credibility of any perceived critic, at odds with itself in developing a mature relationship with the central bank.

Aside from raising yet another question about Cabinet’s integrity, the leak demonstrated a worrying level of stupidity.

Think about this report for, say, half a second: “The Morrison government is ­increasingly frustrated with ­Reserve Bank Governor Philip Lowe’s calls for it to spend more to lift the ­nation’s flagging productivity, after a confidential cabinet briefing from the RBA boss on Monday left ministers exasperated by an absence of detailed policy ideas.”

It’s saying the fiscal policy guys, Scott Morrison and Josh Frydenberg, the ones with all the spending power, are frustrated with the monetary policy guy, Governor Lowe, not having detailed fiscal policy plans.

Treasurer Frydenberg went to some effort last year to put Dr Lowe back in his monetary box.

“I want to emphasise that the discretion we have and our broad mandate to promote the economic welfare of the Australian people do not constitute a licence for the Reserve Bank board to pursue or advocate economic policies outside our area,” Dr Lowe said.

Thus, at the National Press Club on Wednesday in response to questions, Dr Lowe made common sense observations about the economy’s need for investment.

“In an environment where interest rates are very low – yesterday the government’s borrowing costs for 10 years were essentially the lowest they’ve been since Federation – are there investments that the government could make or could encourage the private sector to make that would yield risk-adjusted rates of return greater than the lowest interest rates on record?” he asked.

“For me, that’s a much more important issue worth thinking about.

That was lunchtime on Wednesday.

Shortly thereafter, a not-very-bright Cabinet-level someone gave the governor a smack via a leak to the government-friendly Murdoch paper, trying to undermine the value of Dr Lowe’s common sense.

The LNP Gazette dutifully reported: “The Australian understands Dr Lowe relayed those (investment) calls in a rare confidential cabinet briefing on Monday, leaving senior cabinet members frustrated by a lack of detail from the governor on specific measures and projects he wanted the government to pursue.”

Given the relationship and subject matter, the Treasurer’s office appears the most likely source of The Australian’s “understanding”.

What the leaker didn’t tell the Murdoch employees is that RBA governors since Ian Macfarlane have been invited to give briefings to cabinet.

The briefings, as many as twice a year, weren’t broadcast within or without the bank.

Those previous briefings to governments of both stripes weren’t leaked, let alone leaked against a governor.

It is symptomatic of an administration now in a constant state of denial and obfuscation, whose first instinct is to “fib” and blame shift rather than to take responsibility.

Never forget Mr Morrison and Mr Frydenberg continue to claim there was nothing wrong with the government corrupting the $100 million community sports infrastructure grants, just a minor technical flaw on Bridget McKenzie’s behalf regarding a gun club membership – an oversight.

The deny-quibble-deny stance has remained in place with daily revelations of other blatant pork-barrelling before the May election –other theft of taxpayers’ funds by a political party.

I wrote of the cost of government’s steady diet of deceit – the loss of trust in government – last Monday; how, among other things, it raises doubt about the real motives for expensively using Christmas Island as a quarantine station.

It has taken less than a week to have that doubt confirmed, with the Nine newspapers reporting New South Wales was willing and able to handle the Wuhan evacuees.

After declaring black was white, it’s now necessary to check if any of this government’s ministers say the sun rises in the east.

That’s a bad place to be facing an increasing economic challenge.

If the government can’t handle mere political corruption, what faith can people and business have in it managing a genuine economic crisis if the coronavirus turns out to be as damaging as it threatens?

If the Treasurer can’t handle a Reserve Bank governor talking about old-fashioned Keynesian economics to get the economy moving if required, could he be capable of, say, ditching his Prime Minister’s dogmatic rejection of increasing Newstart if consumption needs an injection that won’t primarily go to paying down mortgages?

Do bears defecate in the woods? Do koalas burn in bushfires?