The richest 1 per cent of Australians are now more than twice as wealthy as the bottom 50 per cent combined, research has found.

Soaring living costs and stagnant wages have made it much harder for ordinary working Australians to make ends meet.

And cuts to the public sector mean there’s less support for those doing it tough.

All while the top end of town rakes in more money than it could hope to spend – and slip through loopholes to avoid paying tax.

In a report released before the World Economic Forum beginning in Switzerland on Tuesday, global charity group Oxfam found the richest 250,000 Australians have more than double the amount of wealth than the bottom 12.5 million Australians combined.

Oxfam attributed the gap to the “greater financial return placed on money and assets (capital) than on work,” in addition to corporate tax avoidance and tax breaks for asset owners.

Stagnant wages and insufficient public spending have made it much harder for average Australians to achieve “a high-quality lifestyle,” she said.

And a winding back of Australia’s progressive taxation system is only making matters worse.

“This is a new phenomenon – where the number of billionaires continues to increase and amass wealth that they can’t possibly hope to spend, while average community members are seeking basic support,” she told The New Daily.

“This is not just accepting that some people will be richer than others. This is a population-wide trend that is very worrying, not just for the very poor but, in fact, for the middle.” 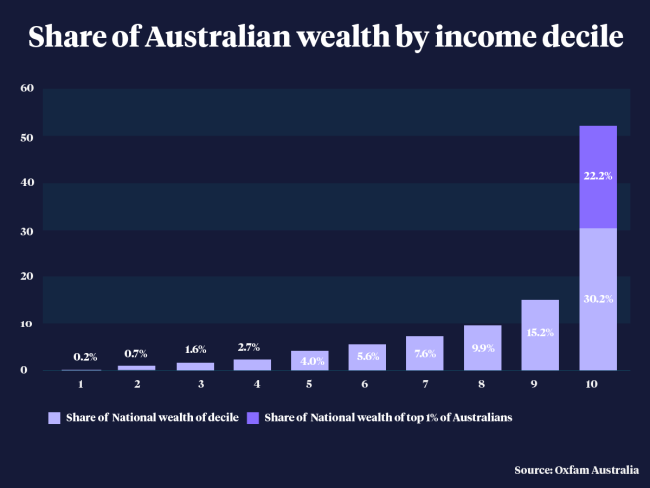 According to the Australian Taxation Office, one-third of companies with revenues over $100 million paid zero tax in the 2017-18 financial year.

Ms Morgain said these companies had refrained from paying their fair share of tax at a time when governments needed significant funds to deal with major challenges such as climate change.

“The bushfires are the best example of that,” she said.

“We now need to find additional funds, but we can’t do that if the top end aren’t paying their fair share of tax.”

Emma Dawson, executive director of progressive think tank Per Capita, said many Australians would be shocked and surprised by Oxfam’s findings, given the country liked to think of itself as “egalitarian”.

Meanwhile, the unemployment benefit Newstart hasn’t increased in real terms since 1994, and childcare costs have increased almost 35 per cent since 2013. 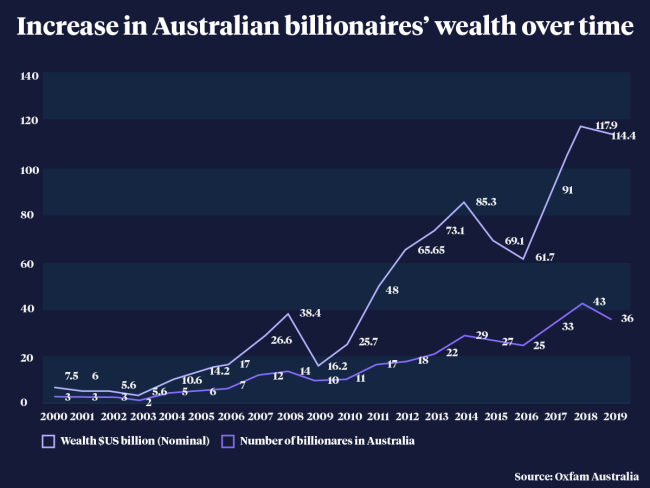 “But this policy is explicitly aimed at giving more money to people who are already doing it pretty well. And it isn’t doing much for people earning little.

“So these are changes that are going to exacerbate that inequality – both in terms of the direct money going into people’s pockets, but also because those tax cuts in total are removing $158 billion in revenue from our budget over the next five years.

“And that’s money that would otherwise be spent on social wages – on things like healthcare, childcare, education – the costs of which are all going up at a massive rate.”

Added to this is the fact Australia places relatively few taxes on wealth.

For example, Ms Dawson said Labor’s franking credit reforms “would only have hit people who are so well off that they don’t need to draw any pension or work for a living at all”.

“We’re just not willing to tackle these big inequities,” she said.

“The cost of franking credits to that group alone is running at $5 or $6 billion a year now. Well, again, that’s what it would cost the government to meet the shortfall in funded home care packages for the elderly.”

Govt says it has taken action on tax avoidance

Asked whether growing wealth inequality was damaging for Australian society, treasurer Josh Frydenberg said the best way to tackle inequality was to provide job opportunities across the economy.

He told The New Daily more than 1.4 million new jobs have been created since the Coalition came to government.

And he said the government was clamping down on tax avoidance, too.

“Since the commencement of the ATO’s Tax Avoidance Taskforce on 1 July 2016, the ATO has raised around $15.5 billion in tax liabilities against large public groups, multinational corporations, wealthy individuals and associated groups,” Mr Frydenberg said.

“In the 2019-20 budget, the government also provided more than $1 billion to the ATO to extend its Tax Avoidance Taskforce to 2023, with a focus on multinationals, big business and high wealth individuals.

“This additional funding is estimated to raise a further $4.6 billion in tax liabilities over the next four years.”