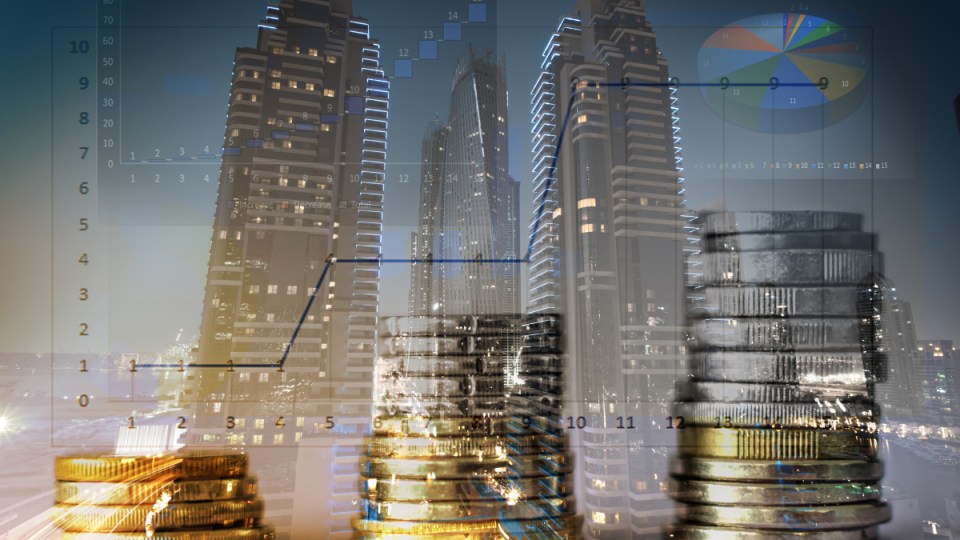 How much of the corporate dollar is the tax man able to see? Photo: Getty

The resource giants who built the mining boom since 2000 earned $53.8 billion in revenues in the 2017-18 year without paying any tax, according to the Australian Taxation Office’s latest figures.

Overall, one-third of companies with revenues over $100 million, or 710 firms, didn’t pay any tax at all.

The 1504 companies that did pay tax sent $52.3 billion to the Treasury coffers. 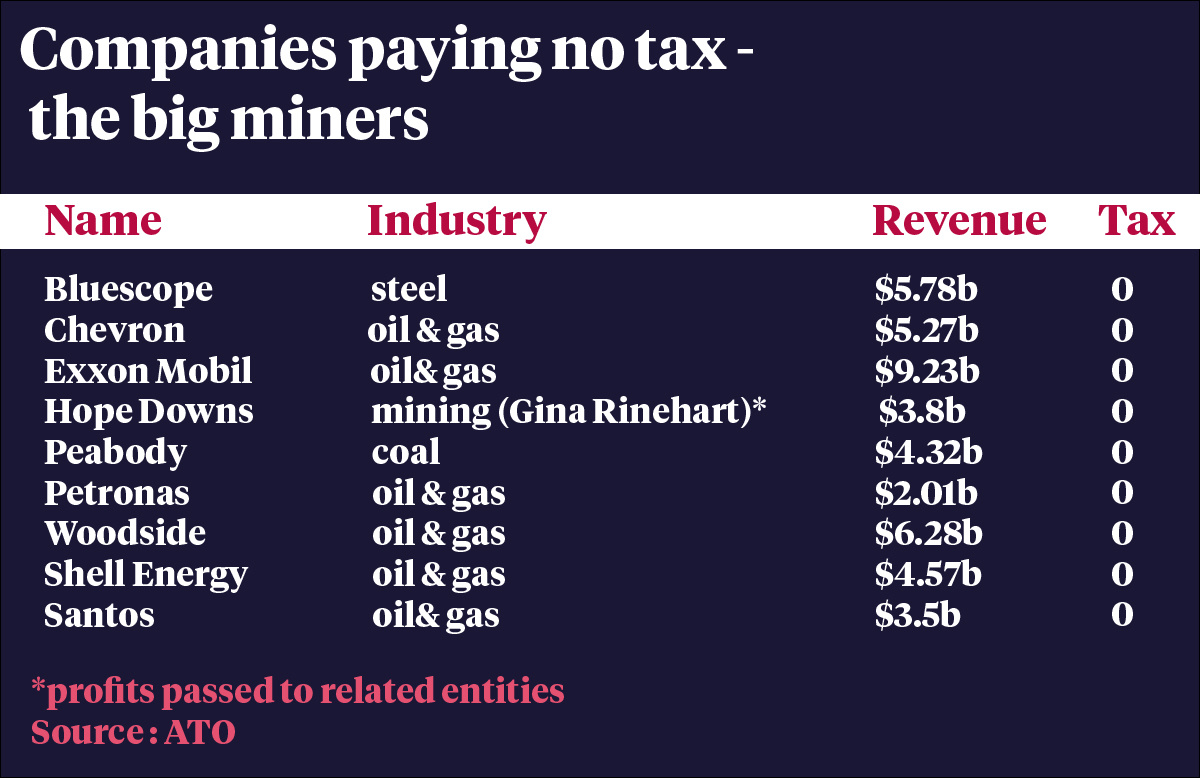 They built the gargantuan gas platforms in Western Australia, the Northern Territory and Queensland that made Australia second only to Qatar in gas exports, but they have $324 billion in tax credits in the bank.

That means they won’t be paying tax for years to come, and the only other source of revenue from their massive projects, the Petroleum Resource Rent Tax, only pulled in $1.15 billion in 2018-19.

And more than half of that came from BHP which – unlike its big foreign competitors – paid almost $4 billion in tax.

It’s not only the miners that are not paying tax.

Ford, Mitsubishi, General Motors Holden and Toyota took in $20 billion in revenues but paid none, despite having closed the manufacturing operations that were losing them money.

Now they are just glorified dealerships, but Helen Hodgson, taxation law expert at Curtin University, said they could still be carrying forward losses from years gone by. 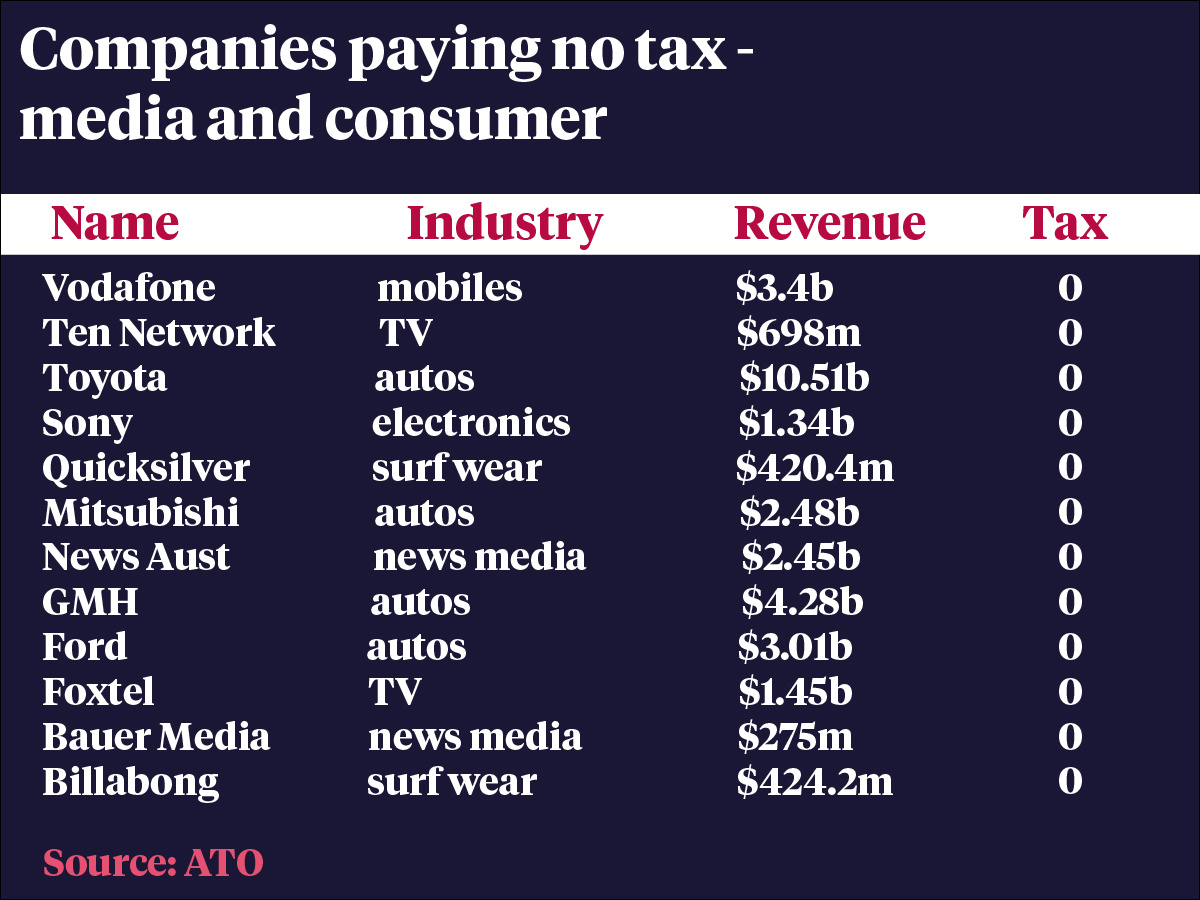 And Apple, which turned over a massive $9.25 billion in revenues, paid a miserly $120 million in tax. 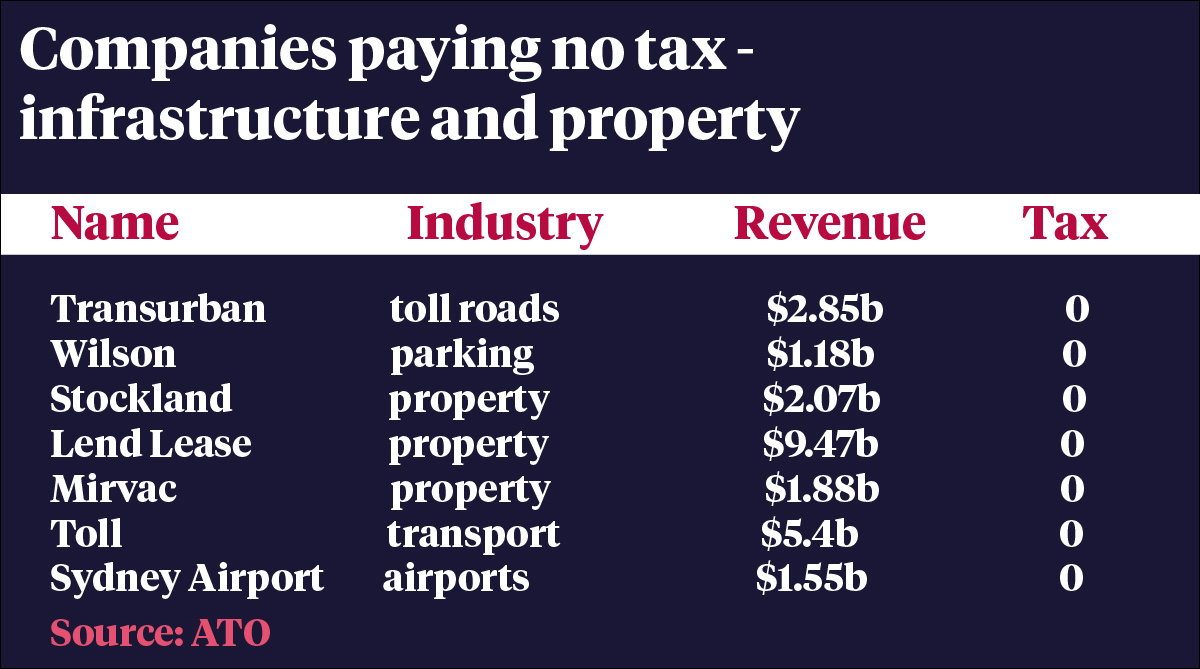 There are also a few companies on the list of non-taxpayers you mightn’t have expected to see.

Meanwhile, lawyers Slater and Gordon made revenues of $240.13 million but also paid no tax, probably a legacy of losses from an ill-fated entry to the UK. 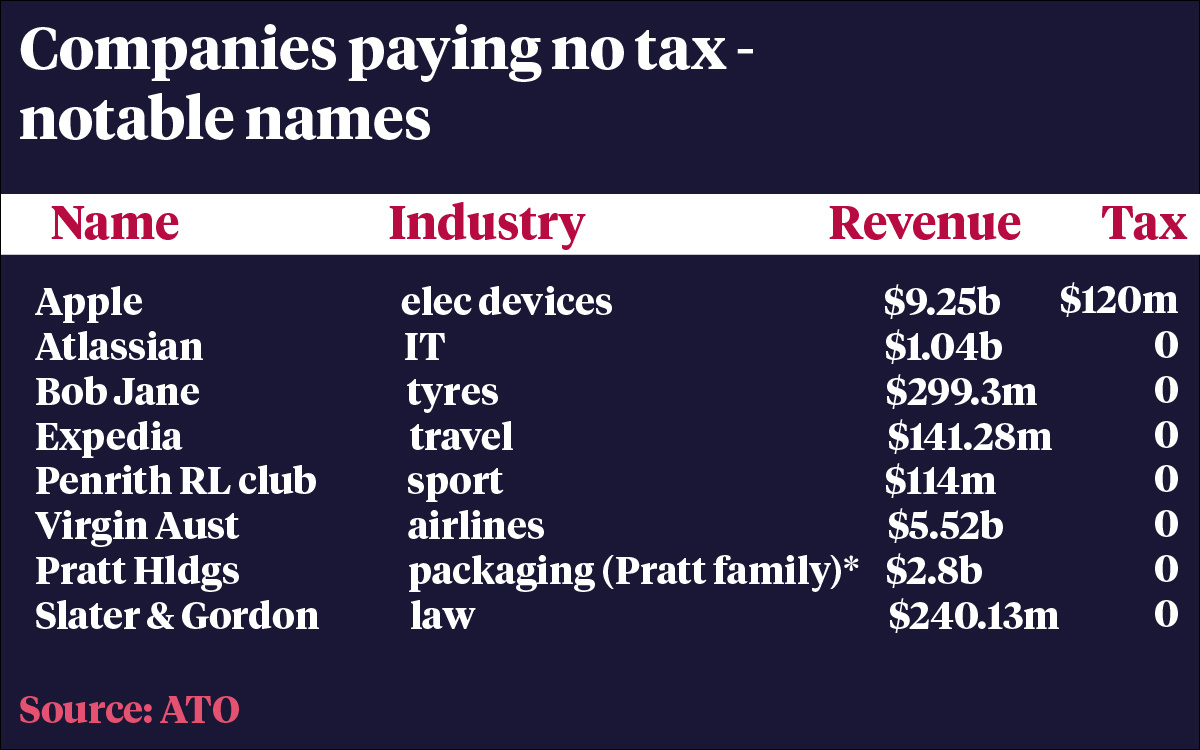 Companies associated with some of the country’s richest, such as Anthony Pratt and Gina Rinehart, paid no tax but acted as conduits to related entities – meaning their actual tax positions aren’t clear.

So does all this mean that corporate Australia is getting away with blue murder?

Curtin University’s Professor Hodgson says that despite the government talking about crackdowns in recent years “there’s still some inefficiencies there”.

“Despite spending $24 million on an advertising campaign promoting tax integrity, Scott Morrison continues to let multinational companies get away with paying little or no taxes,” Mr Jones said.

“While the average single Australian worker pays 25 per cent of their income in tax, large companies earning over $1 billion averaged tax payments of only 2 per cent of total income.”

The ATO is more sanguine with deputy commissioner Rebecca Saint saying a small number of firms were “systemic non-payers”.

Defining this group, the ATO says “our best estimate of the net income tax gap for large corporate groups is approximately 4.0 per cent ($2 billion) in 2016-17.”

While around the same percentage of companies paid no tax in 2017-18 as the year before, the ATO said it collected an extra “$6.6 billion in tax payable [that] was primarily driven by strong commodity prices,” Ms Saint said.

That rise in tax revenues is clear from this chart, which shows mining was the only sector contributing significantly more in recent years than previously. 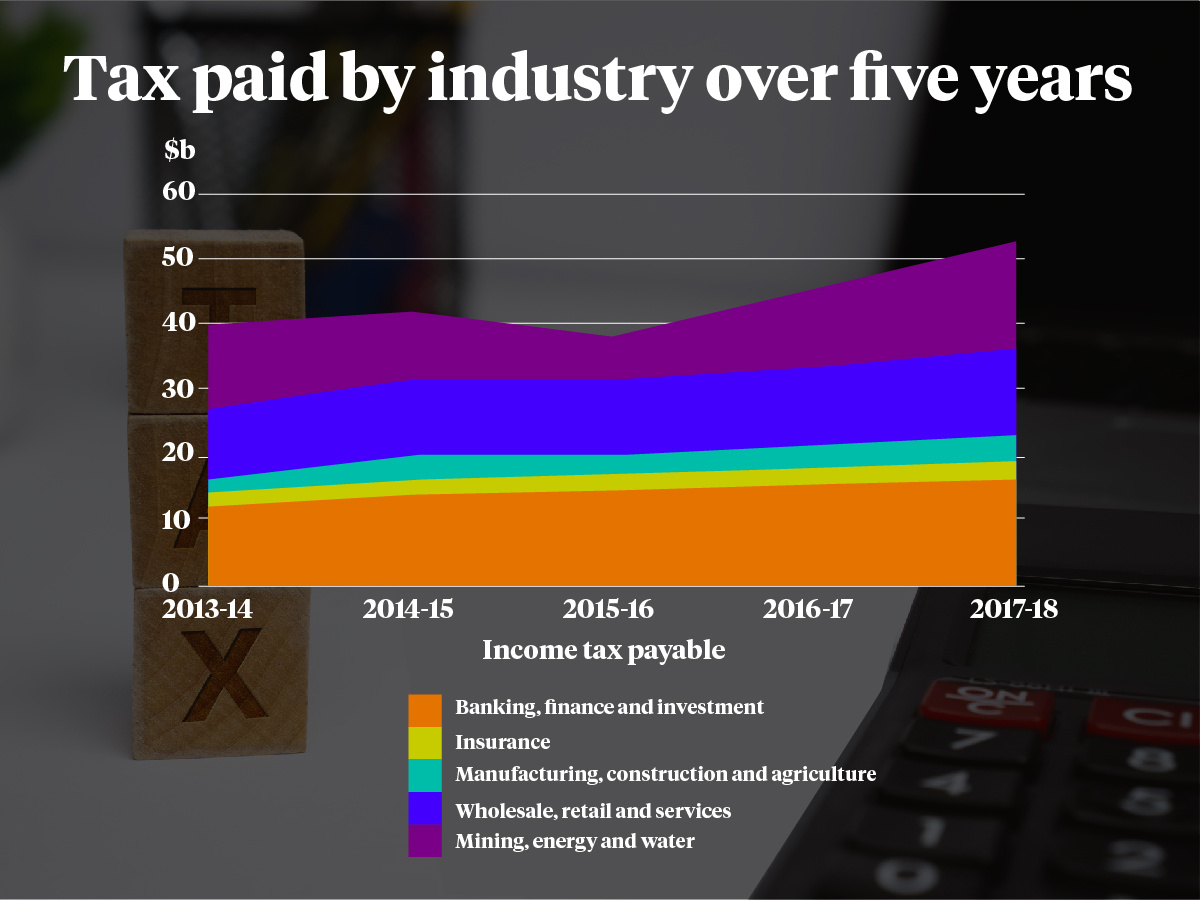 Crackdowns on transfer pricing where bogus financial transactions are used to syphon money offshore have also paid a dividend.

“Significantly, over $7 billion of sales income is now being booked in Australia as a result of companies restructuring in response to the multinational anti-avoidance law (MAAL),” Ms Saint said.

So is the ATO to be believed when it says it is only 4 per cent shy of its targeted tax take?

Independent economist Saul Eslake says “I’d be fully confident that companies not paying tax are doing so for good reasons and the ATO would have checked that”.

“OECD statistics show that Australia collects more company tax as a percentage of revenue and GDP than most other countries, so the system appears to be working well.”

However John Quiggin, economist at the University of Queensland, says the introduction of dividend imputation in the 1980s has reduced the company tax take because it reduced the tax take on company dividends.

“The wisdom of that decision should be questioned,” Professor Quiggin said.