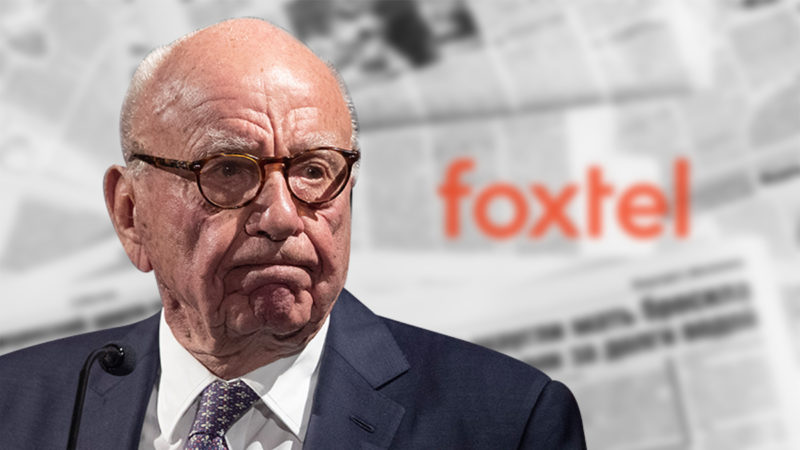 Rupert Murdoch’s News Corporation is on the slide, once again reporting a loss –  $306.7 million for the September quarter – in stark contrast to its $186 million positive result at the same time last year.

The whole News Corp group has actually fallen in value since Mr Murdoch split his empire into News Corp (newspapers and Foxtel) and 21st Century Fox (film and international television) in 2013.

Australia was one of the drivers of the loss, with the company saying it was hit by “challenges in the Australian housing market” and “lower subscription revenues at Foxtel”.

The 65 per cent-owned Foxtel is an ongoing sore, with News Corp having to stump up an extra  $200 million in the quarter to bring its total loans to Foxtel to $700 million. Overall Foxtel debts top $2.3 billion and News presaged a debt restructure in coming weeks to try to put the group on a more solid financial grounding.

A debt transfusion for Foxtel

The refinancing “will include a package of bank refinancing, third party financing and additional shareholding funding,” News Corp chief financial officer Susan Pannucio said in an investor call on Friday.

Foxtel has been hit by the advent of video-on-demand services, such as Netflix and Stan, which undermined its monopoly on programming beyond free-to-air television. Excluding the effects of currency movements, Foxtel revenues were down 3 per cent because of “lower broadcast subscribers and changes in the subscriber package mix”.

That means that less people are choosing Foxtel and those that do opt for cheaper deals. Subscription falls are partly offset by growing memberships of video on demand offerings Foxtel Now and its sports partner Kayo.

But they are cheaper than the traditional offer and overall “revenue per unit (subscriber) has fallen from $100 to $78 in recent years,” said independent media analyst Peter Cox.

On September 30, Foxtel had 3.06 million subscribers, which was a rise of 6 per cent “primarily due to “the launch at Kayo and modest subscriber growth at Foxtel Now,” the company said.  However some of those new subscriptions aren’t delivering any revenue at all, with 66,000 people enjoying free service.

Attempts to push up Foxtel subscription prices have not been totally successful, with churn rising from 14.4 per cent of subscribers compared to 12.9 per cent a year earlier. That churn means more people dropped Foxtel membership as prices rose.

Saving Foxtel seems to be a somewhat forlorn cause for News. “Telstra (which owns 35 per cent) won’t put in any money and they keep relaunching channels and changing names,” Mr Cox said.

“But the horse has bolted” with the advent of video streaming services, Mr Cox added. “It’s the same with free-to-air television as people have other forms of entertainment and other ways of watching TV,” Mr Cox said. “It’s a vicious circle for Foxtel.”

The traditional news and information businesses took an advertising-revenue hit of 5 per cent compared to a year earlier. Its Australian operations, which include names like The Daily Telegraph, Herald Sun, The Australian and Courier Mail, were down 11 per cent.

There was weakness in the print advertising market “primarily in Australia”, News’ statement said. While print readership is falling digital subscriptions were 542,000 at September 30 compared to 442,000 a year earlier.

The UK mastheads including The Times rose 49,000 and the Wall Street Journal digital subscriptions were up 300,000 to 1,584,000, a rise of 17 per cent. The Dow Jones information business also saw an increase in subscription revenues.

The falling newspaper revenues “surprised me because they have some good mastheads,” said media analyst Steve Allen of Fusion Strategies. The future for News Corp was under a cloud because of doubts over the economies of Australia, and the UK and concerns over trade in the US, he said.