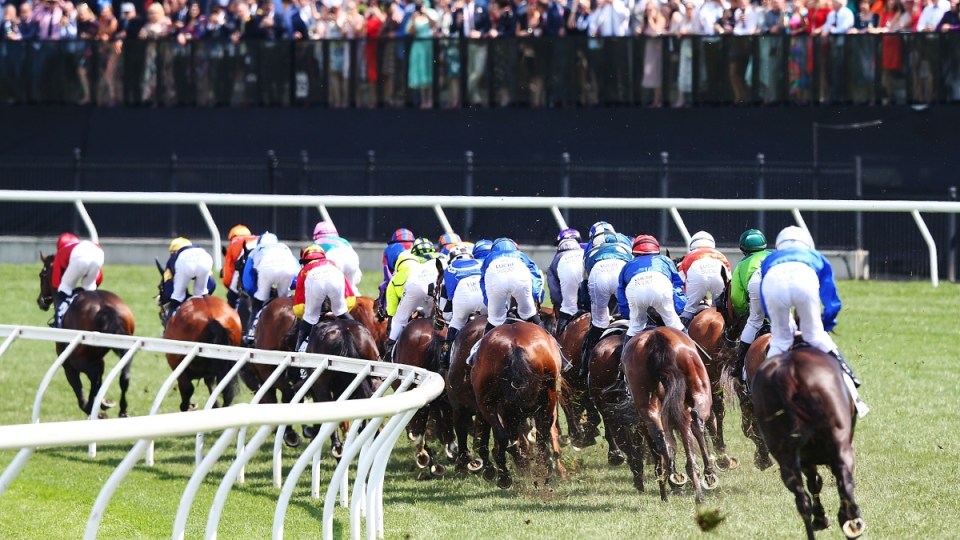 Horses jockey for position on the first lap in the Melbourne Cup. Photo: Getty Photo: Getty

This is the time of year when thousands of self-described punting experts cast their eyes over the form guide – hoping to back a winner in the Melbourne Cup.

But in the lead up to the race that stops a nation, the “perfect storm” is causing Australia’s love of punting to dry up on the eve of the 3200-metre spectacle.

It is no great shock that Australia’s horse racing industry relies heavily on the gambling industry.

It generates around 90 per cent of Racing Victoria’s annual revenue and there was more than $7 billion in turnover last financial year.

But the 2019 Caulfield Cup experienced a 24 per cent decline in betting, while Racing Victoria reported a 7.5 per cent decrease overall from record-high numbers last year.

But from an industry perspective, the declining figures were mostly down to bad luck.

“Overwhelmingly, the main reason for it is that there’s been a string of unprecedented race results go in favour of the bookmakers and against punters.”

Animal welfare concerns were raised on the eve of the Spring Racing Carnival when the ABC’s 7.30 program highlighted the poor treatment of some thoroughbred racehorses after their careers had ended.

Ron Woodward couldn’t bring himself to watch the footage.

He had been a life-long punter.

“I think racing has been in my DNA, really, from the time I was a little kid in short pants,” he said.

“I can remember at Caulfield, I used to go there and after the races were over I used to run around the Caulfield track pretending I was one of the horses.”

In 1965, Mr Woodward took his now-wife to the Caulfield Cup and he backed the winner.

“I’ve met this girl and I’ve taken her to races, Bore Head has won and I backed it,” he said.

But the retiree now doesn’t watch a race.

“It was only up until the last couple years where I’ve really had serious concerns about what was happening,” he said.

He said the final straw was watching the scandals within the racing industry unfold over the past year.

But those in the industry believed Mr Woodward was not symbolic of a cultural shift.

“Someone like me who really drills down on the numbers, I can see that it’s getting harder and harder [to win],” he said.

“Then you’ve got the more recreational punters, they start to realise that over time, their gambling money is not going as far.”

Racing Victoria’s hybrid race fee model taxes gambling companies when they win based on their revenue or turnover (whichever is greater), and on their turnover when they lose.

It’s a contentious policy, which many betting industry insiders said was to blame for a decline in betting.

Responsible Wagering Australia, the peak body for gambling companies in Australia, believed these fees, combined with the introduction of a Point of Consumption tax, were placing pressure on companies.

“When taken together, race field fees, the Point of Consumption Tax and other charges impose one of the highest effective tax rates on wagering globally,” a spokesman said.

“I don’t really care that much about the bookies, but what the industry needs to have is fairness and this is unfair on the bookies,” he said.

“What it does do is lead to punters like me getting worse value and worse odds.”

Racing Victoria conceded it could be a factor.

“It certainly might be one of the variables. It certainly is an important part of the total cost of the product and in a competitive wagering market, it might be having an impact,” Mr Morrison said.

Other factors included the increasing uptake of sports betting and the retirement of superstar mare Winx.

Whether it’s bad luck, bad design, or all of the above – backing a return to previous record levels of wagering activity might be an optimistic outlook.

“A few different things have all come together to essentially create a perfect storm for Racing Victoria at the moment,” Mr Irvine said.

And when the industry relies on wagering activity, that’s a cause for concern with a stake in racing’s long-term health.

Why are punters turning their backs on betting before the Melbourne Cup?