The transition to electric vehicles (EV) presents the government with its toughest challenge in almost 20 years, according to a leading business figure.

That challenge is not the move to EV in itself, rather the multibillion-dollar black hole that it threatens to create.

Consider these figures: In the 2019 financial year, Australian motorists paid $19.68 billion in fuel excise tax, pouring into government coffers at 40.9 cents a litre.

In the context of the Australian car market, the numbers aren’t big, but they are growing.

The Electric Vehicle Council estimates 50 per cent of new vehicles sold in Australia will be electric by 2035, “even on a business-as-usual basis”. 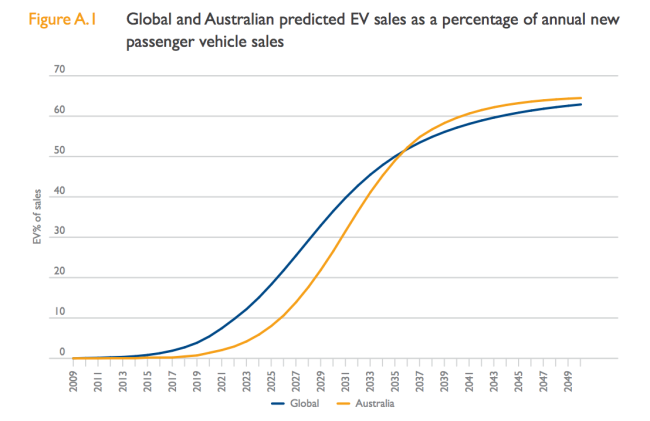 “If we’re already on the path to this destination, why not march there?”

Assuming that to be the case, the nation is inevitably looking at fewer fossil-fuel-driven vehicles on our roads, and that is going to mean a widening revenue hole caused by the erosion of the fuel excise tax.

As Mr Jafari points out: “There’s no doubt a mass transition to electric vehicles will require long-term reform in the way governments collect revenue for roads.”

The problem is, no political party, seems to have a cogent plan for that very reform.

The government in October 2018 shelved the idea for an inquiry into road-user charging, despite the promise of an “eminent person” being appointed to head it.

In a statement, a spokeswoman for Transport Minister Michael McCormack told The New Daily that government acknowledged the  “uptake of electric vehicles is one of the biggest challenges to which the [transport] industry will need to adapt”.

“We will consider possible solutions for the replacement of fuel excise lost through the transition to alternative fuels, but we must be 100 per cent sure any change will deliver better roads and a fairer pricing system.”

A spokesperson for Shadow Transport Minister Catherine King hit back, saying the government had talked about examining alternatives for “three years”.

“It’s been a year since this minister shelved his government’s long-planned inquiry – what has he actually done in the meantime?”

However, Labor equally was unable to provide any tangible policy or modelling on an alternative to the fuel excise.

The Greens have no specific plan to replace the fuel excise, but rather a series of tax measures, including scrapping the tax-free fuel rebate for mining companies.

The Automobile Association of Australia (AAA) said the shift in technology has raised serious questions over the government’s $19.68 billion annual windfall, and “a hard conversation is due”.

“Not since the GST’s introduction has the government had such a project on its hands,” AAA chief executive Michael Bradley wrote in 2018.

It has estimated that if Australia goes the same way as Norway with an EV penetration of 55 per cent by 2030 – as proposed by the EV Council – that would likely cost the the federal budget more than $15 billion in lost fuel excise.

One option includes using odometers to charge drivers on a per- kilometre basis.

But as Simon Holmes à Court points out, road-user charges are a highly regressive tax that hits the poorer sections of society the hardest.

“While there is merit in some kind of road-user tax, it’s just a very regressive tax, in that the number of kilometres you drive is often directly inverse to your income,” said Mr Holmes à Court, a board member of the Smart Energy Council.

“The further you drive, the more you pay … and so people who live in poorer suburbs or in the regions logically pay more.”

Equally, it would also be “a bad look” to specifically tax electric vehicles, which is effectively slowing down the transition to EV.

But Mr Holmes À Court said the whole debate about fuel excise was based on a false premise, namely that the tax directly funded roads in Australia.

“Almost every article on this ties the fuel excise to road funding, but the connection between the two actually finished in 1959,” he said.

“There used to be a direct connection, but that nexus was broken 60 years ago.

“So that means that if everybody started driving electric cars tomorrow, the roads would not fall apart.”

A Budget Review document from the Parliament of Australia Library shows that Australia will spend an estimated $5.6 billion on “infrastructure spending on roads” in 2019-20, against final fuel excise revenue of $19.68 billion in 2018-19.

The EV Council’s Mr Jafari agreed that the idea of road maintenance being “neatly hypothecated to vehicle use is silly, not least of all because that’s not what the fuel excise achieves currently”.

Mr Holmes À Court also argued that the transition to EV is so gradual, that the problem of revenue loss is still such a long way off that governments have years to come up with road pricing reform.

“So, this is not a problem that will manifest in the 2020s, it might become one in the 2040s, but there won’t be a significant erosion of fuel excise for quite some time.”

Mr Jafari added that governments also needed to consider the ancillary cost benefits of EV on the roads.

He cited research released this year that found emissions from combustion engine vehicles in the Sydney-Newcastle-Wollongong area alone created $3 billion in health costs.

“Far from getting an unfair advantage, electric vehicle drivers should be asking why they don’t derive any reward for saving the taxpayer thousands in health costs each year,” he said.