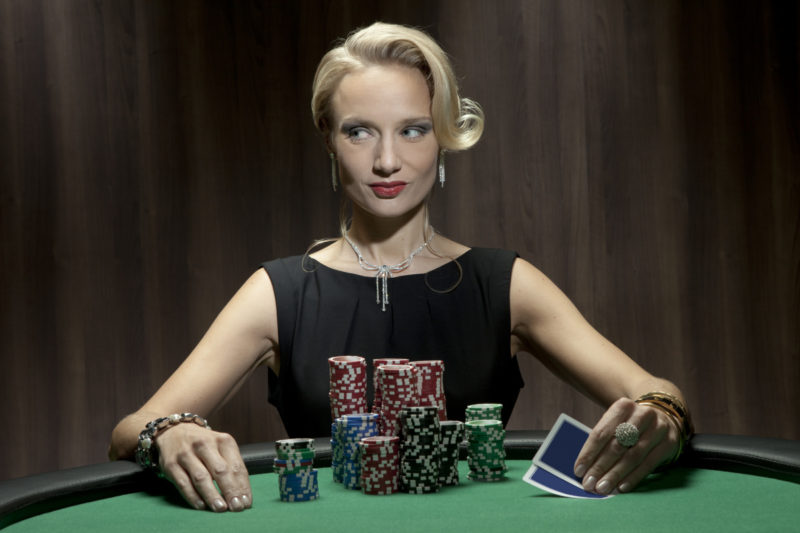 Australians are placing ever bigger bets on a few growth stocks. Photo: Getty

We have all read stories on how expensive Australian houses are in comparison to those overseas.

But when it comes to growth shares, the situation is even worse.

Fund manager State Street has found that the price-equity ratio (PE) of high-growth companies on the Australian Securities Exchange (ASX) is about 60 times earnings. That means the value of the stock is 60 times what its business earns each year.

For the average of growth stocks on overseas markets, the PE is around 20 times earnings, State Street’s investment chief Bruce Apted found.

Growth stocks are defined as those expected to be in the top 20 per cent of expected earnings per share growth in the next three years. 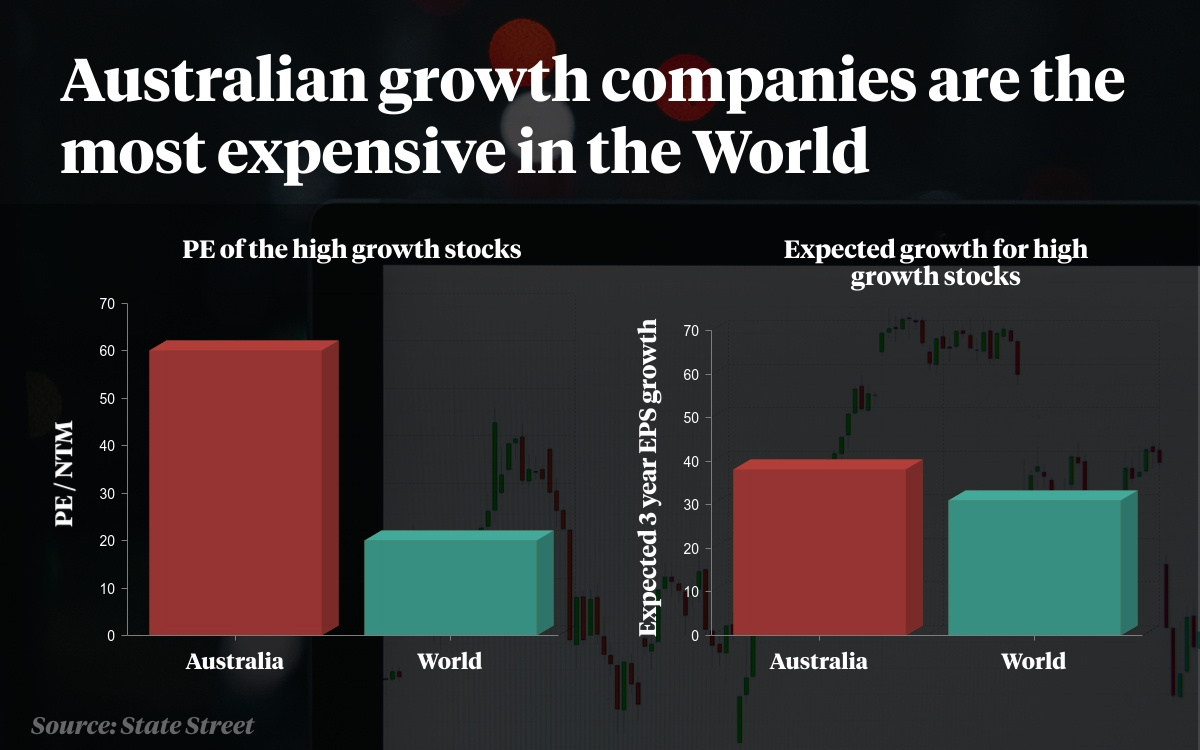 The findings mean that Australian growth companies are three times as expensive as their foreign counterparts.

“Are they really worth three times the earnings of offshore companies?

“While the higher growth is a consideration, it isn’t enough to justify the valuation differential,” Mr Apted said in the report.

Much of the hope held by investors for rapid growth is with the tech sector. Here also, Australian shares appear overvalued.

The ASX Infotech sector is where investors are trying to pick what will turn into an Aussie Google or Facebook. 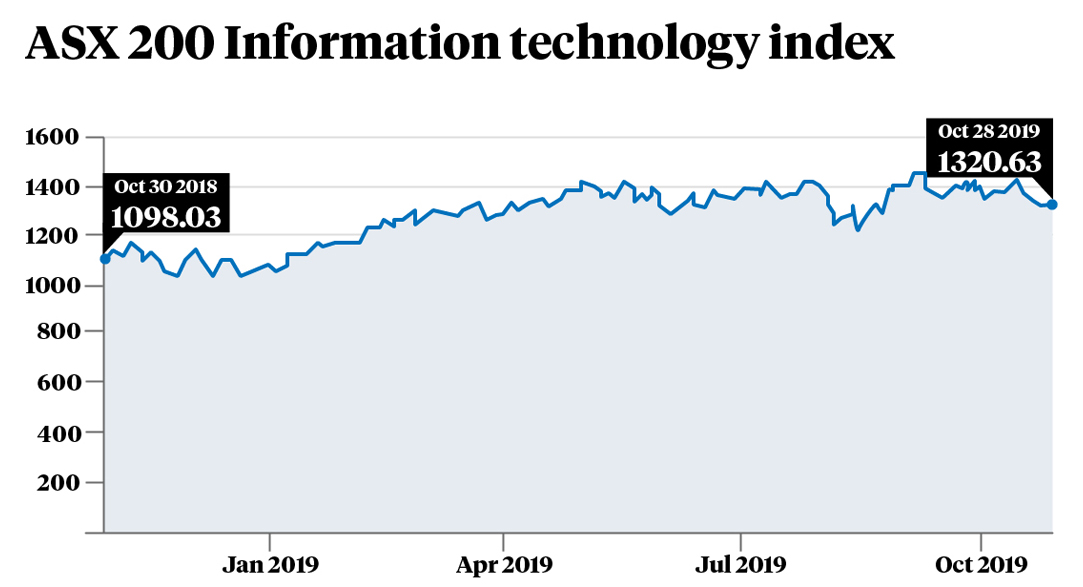 That reflects the fact that investors are still prepared to throw money at would-be stars, despite the outsized valuations of the companies expected to outperform.

The Infotech index is minuscule compared with the NASDAQ, consisting of only 12 stocks with a total value of $1.3 billion, while the overall market is worth $2.29 trillion.

The NASDAQ is worth $US13.12 trillion ($19.15 trillion) – more than a third of the total US market capitalisation.

Some of the Infotech index’s best-known names are share-trading software group Computershare, Altium and logistics software group WiseTech, which still sits on a PE of 150, despite a recent attack by short sellers.

Another favourite with tech investors to suffer a recent hit in the sharemarket is Afterpay, which is still valued at $7.2 billion after much negative publicity and a share price fall of more than 12 per cent.

The high valuations on growth stocks mean that the market is brittle, and any shock could bring overblown expectations back to earth with an ugly crunch.

Investors are willing to take that risk for a number of reasons.

“The lack of growth opportunities makes the few companies with growth more attractive to investors … within a small market like Australia,” Mr Apted’s statement read. 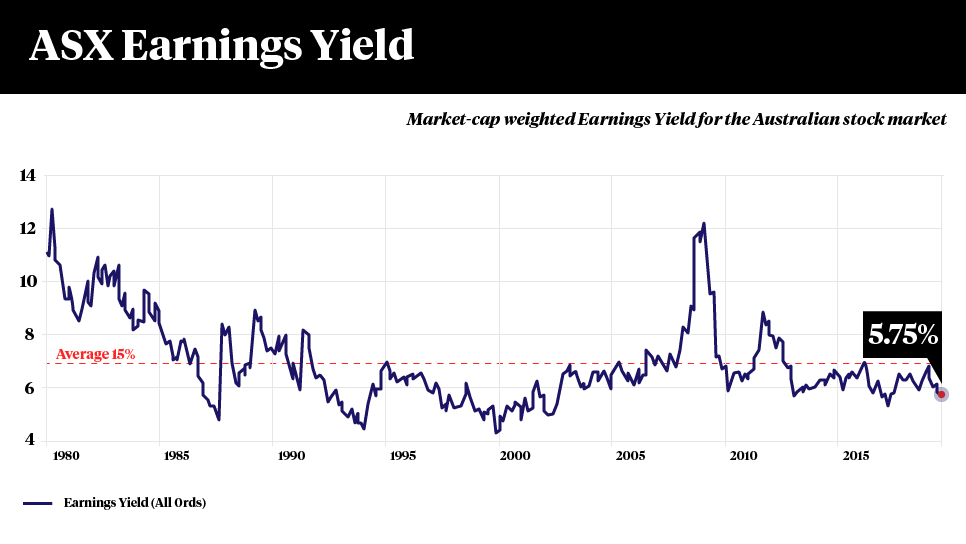 It’s not only the tech shares that are looking overbought in Australia.

As the above chart shows, the earnings yield (earnings as a percentage of market capitalisation) is sinking as investors have been prepared to pay more for a given yield as interest rates fall.

“The Australian market is trading above average valuations, seemingly only on the hopes of another interest rate cut and an end to the trade war, but earnings are flat,” Mr Bassanese said.

Those flat earnings mean there is nothing to underpin the growth in valuations.

“The RBA is running a confidence game. There’ll probably be another rate cut to 0.5 per cent in the next year, but there’s no hope that the government will boost spending because it wants to protect its surplus,” Mr Bassanese said.

“So the RBA might resort to quantitive easing, but buying government bonds is of limited value because the only one who can borrow using them is the government, and they have said they are not going to borrow.

“Ultimately, they may have to buy corporate bonds to give corporates incentive to borrow at lower rates.”

If you think houses are overvalued, take a look at growth shares