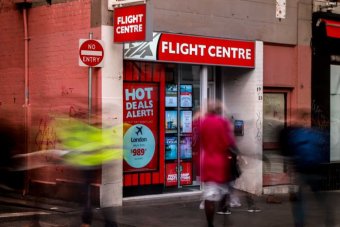 Flight Centre was badly affected by a collapse in travel amid the coronavirus pandemic. Photo: ABC

Australia’s largest travel agency has paid a $252,000 penalty for allegedly misleading customers about the conditions of its holiday period promotions.

The Australian Competition and Consumer Commission has issued Flight Centre with two infringement notices for its advertisements promoting holiday vouchers during the 2018 Christmas and 2019 Easter seasons.

All the customer had to do was spend at least $1500 on holiday packages with the agency.

These vouchers could be redeemed when booking their next holiday with the company.

However, the consumer regulator alleges that Flight Centre’s advertising was misleading because it failed to make an important disclosure.

The company’s promotion failed to mention that customers had to book an even more expensive holiday, valued at more than $5000, to redeem the voucher.

“We are concerned that consumers were enticed to purchase their holiday through Flight Centre to obtain a voucher they were not able to use without spending another $5000, when this was not adequately disclosed,” ACCC commissioner Sarah Court said.

“Businesses are warned that the terms and conditions of any deal or promotion must be prominent, so that consumers understand what is involved in redeeming the offer.”

More than 35,000 consumers received the vouchers.

Although Flight Centre has paid the fine, that is not an admission of liability under Australian consumer law.

The travel agency has since waived the requirement for customers to spend at least $5000 to redeem the voucher, the ACCC said on Monday.

The redemption period – for the vouchers issued as part of the Christmas and Easter promotions – has also been extended to December 31.