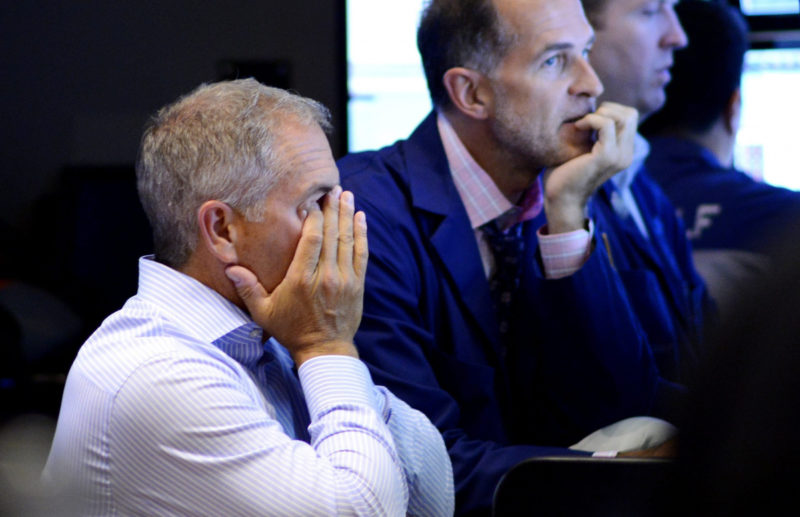 Global markets have been shaken by falls. Photo: AAP

The Australian sharemarket went into free fall on Thursday, losing $44 billion as the S&P/ASX 200 index of major shares tumbled 2.3 per cent to 6493 points.

It brings the market losses in two torrid days to $80 billion as investors were shaken by fears of a global recession and a weak local economy.

The falls were widespread, with the energy sector down 3 per cent.

Market weakness started in mid-September after the share index made up 300 points, or 4.8 per cent, from a sharp slump in July.

Despite the latest slump, shares are up almost 1000 points, or 14.8 per cent, this calendar year.

The falls came on continuing concerns about the world economy, with data showing US factory production was at 10-year lows.

At the same time, the all clear was given by authorities for a $US7.5 billion ($11 billion) rise in American tariffs against European manufactures and foodstuffs.

US employment figures were also disappointing and in Australia a weak economy convinced the Reserve Bank to cut interest rates to a record low of 0.75 per cent earlier in the week.

“The falls are a reflection of the fears of a US-China trade war finally starting to impact on the US economy,” said BetaShares economist David Bassanese.

“Reality is starting to bite and it’s eroding business confidence around the world.” 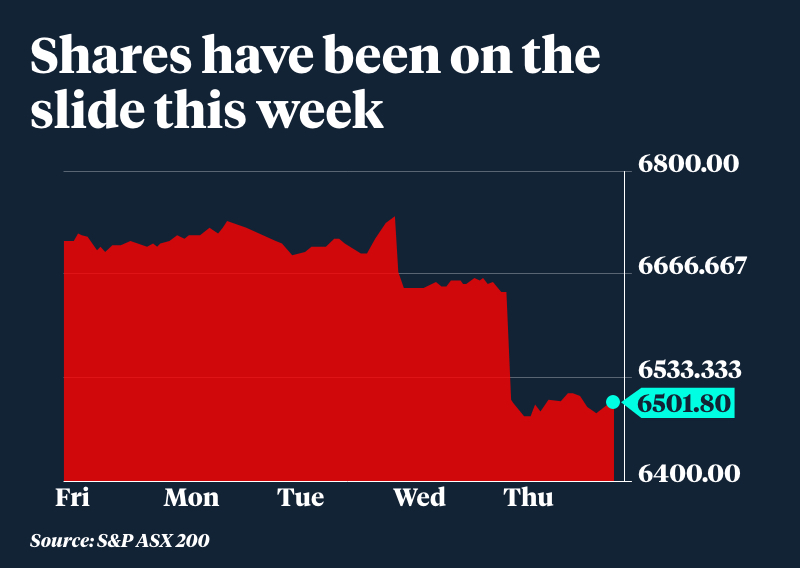 There was further doubt thrown on Australia’s economic performance, with the trade surplus continuing to soften to $5.93 billion in September from record highs as iron ore prices sagged.

The total value of exports fell by $1.46 billion, or 3.0 per cent, to $40.98 billion for the month on a seasonally adjusted basis, more than offsetting a slight $137 million dip in imports to $35.06 billion, the Australian Bureau of Statistics said on Thursday.

Sales of new cars also went backwards for an 18th straight month, with purchases down 6.9 per cent in September compared to the same time last year.

Sarah Hunter, chief economist with BIS Oxford Economics, said “there is a choppiness and bounciness in the market that is not unexpected”.

While the news from America had been disappointing, the environment was not totally bleak.

“We could easily see some recovery in prices when the (US) Federal Reserve cuts rates later this month as we are expecting,” Ms Hunter said.

While recessionary fears are playing on the market, Mr Bassenese said he was not totally pessimistic.

“If the current situation continues then we will see a global recession but if Donald Trump and (Chinese leader) Xi Jinping meet in the next few months and do a deal, then things could change,” he said.

In Australia policymakers were not doing enough to boost the economy.

“The Reserve Bank can only do so much. The drag in consumer spending and tax and rate cuts have not been enough to cause an increase in retail foot traffic,” Mr Bassenese said.

Ms Hunter said the outlook for the Australian economy was not altogether bleak.

“Growth is not robust, it’s muddy. Drags on the economy could see quarter-on-quarter growth of between 0.4 and 0.5 per cent,” Ms Hunter said.

While she expected a further rate cut from the Reserve Bank bringing the cash rate to 0.5 per cent, it was unlikely that governor Philip Lowe would introduce extraordinary measures like quantitative easing (money printing).

Political factors would prevent the government addressing weakness by boosting spending, despite Dr Lowe highlighting the need for it in recent months.

“Quantitative easing would help at the margins but spending on infrastructure projects, boosting road and rail maintenance or income tax cuts for households would be far more effective policy in terms of jobs, wage growth and inflation,” she said.