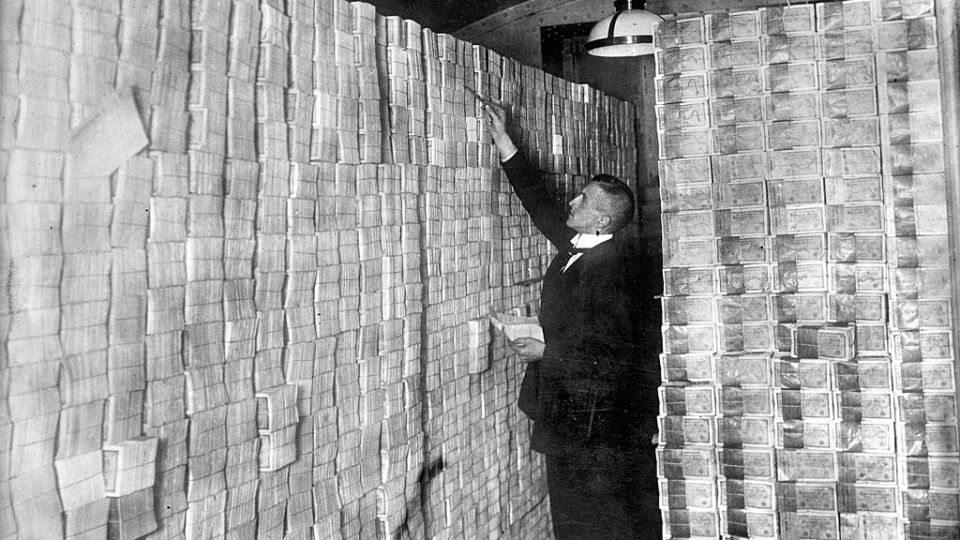 What if the Reserve Bank had an economic weapon that would let the government have its budget surplus cake and eat it too?

A weapon that could push billions of dollars directly into the economy without increasing Commonwealth debt or moving interest rates?

The RBA has the plans for just such a weapon, but it was conspicuously absent from the list of “unconventional” options the central bank has told the government about.

You don’t want little kids to get ideas about dynamite fishing in the dam.

The weapon is “helicopter money”.

It’s at the nuclear end of the central bank’s arsenal and, like nuclear reactions, is powerful and dangerous, requiring very careful control.

At its most over-simplified, “helicopter money” is the central bank printing bank notes and giving them to people and/or governments to spend. Yes, it does somewhat debase the currency.

It’s a process that can take an economy the way of hyperinflation – the Weimar Republic, Zimbabwe, Argentina.

But it also has been used until the 1980s by countries that lived to tell the story – France, Italy, Sweden and the UK – albeit not without problems.

There is a tribe of “modern monetary theory” economists who claim the government doesn’t need to ever worry about budget deficits, that governments can just let debt rip to keep the economy running.

The helicopter money concept is different – there’s no government borrowing.

What’s interesting now is that influential, relatively conservative economists are proposing ways to use the nuclear option safely given that the developed world has reached the limits of monetary policy and many governments’ fiscal options are also limited.

The worry is that the world could be facing a recession without any conventional economic ammunition left to fight it.

All the now-conventional unconventional monetary options listed by the RBA as possible-but-unlikely have been tried by Europe and the US for a decade.

The results seem to be little better than a holding operation, failing to generate the necessary level of inflation or encourage investment while producing incomprehensible trillion-dollar mountains of debt with negative yields.

And that’s before there’s trouble. As a report being studied by every central bank puts it in the executive summary: “The current policy space for global central banks is limited and will not be enough to respond to a significant, let alone a dramatic, downturn.”

It is a challenging and readable report, as well as being definitely scary.

What makes it more important, what will have central bankers’ attention, is who wrote it – a team that includes the former Swiss central bank governor Philipp Hildebrand and former Federal Reserve vice-chairman Stanley Fischer, along with a former deputy governor of the Bank of Canada, Jean Boivin.

The paper, Dealing with the Next Downtown, comes from the world’s biggest asset manager, BlackRock, which has more than $10 trillion under management. That forces and empowers a firm to consider the big picture.

The authors carefully make the case for employing helicopter money – or “monetary-financed fiscal expansion” to use its more technical name.

“Unprecedented policies will be needed to respond to the next economic downturn,” they say.

“Monetary policy is almost exhausted as global interest rates plunge towards zero or below. Fiscal policy on its own will struggle to provide major stimulus in a timely fashion, given high debt levels and the typical lags with implementation.

“Without a clear framework in place, policymakers will inevitably find themselves blurring the boundaries between fiscal and monetary policies. This threatens the hard-won credibility of policy institutions and could open the door to uncontrolled fiscal spending.”

The paper argues for “going direct” – the central bank finding ways to get central bank money directly into the hands of public and private sector spenders.

There are a number of ways of “going direct”.

Whichever is used, the key for controlling the nuclear option is to have explicit limits in place ahead of time for starting and finishing it, lest it run out of control.

“A credible stimulus strategy would help investors understand what will happen once the monetary policy space is exhausted and provides a clear gauge to evaluate the systematic fiscal policy response,” the paper recommends.

“Spelling out a contingency plan in advance would increase its effectiveness and might also reduce the amount of stimulus ultimately needed. As former US Treasury Secretary Henry Paulson famously said during the financial crisis: ‘If you’ve got a bazooka, and people know you’ve got it, you may not have to take it out’.

“This is one way to implement a credible co-ordination framework. In the next downturn, the loss of central bank independence and uncontrolled fiscal spending are risks. Any framework will need to put boundaries around such policy co-ordination to mitigate these risks.”

The authors are acutely aware of present political risks and the social impact of policy. At times they echo concerns raised by RBA governor Philip Lowe.

“There is growing political discontent across major economies – and central banks are one of the targets.

“Widening inequality has fostered a backlash against elites. There are many drivers of inequality, including at its root technology, winner-take-all dynamics and globalisation.

“The GFC and the resulting forced bailout of financial institutions deemed too big to fail has added fuel to this backlash. Not acting during the GFC would have almost certainly led to a Great Depression-like outcome – much higher unemployment and even worse inequality.

“Yet that counterfactual provides no solace to those feeling left behind. And the monetary policy tools themselves might have increased inequality – and are certainly perceived to have done so – by pushing up the prices of assets owned by only a fraction of the population.

“Governments, not central banks, are ultimately accountable for issues of inequality and redistribution. And a greater use of fiscal policy tools is needed to offset the impact of central bank policies on inequality, including the impact of monetary policy.”

No sane central banker wants to be pushed into the unconventional policy that’s in place in the US, Europe and Japan, let alone beyond it. The authors are saying the nuclear option of “going direct” is about all that’s left with which to fight the next battle.

Australia, thankfully, is one stage behind the frontline. The government’s intransigence over further fiscal stimulus, its doctrinaire preference for claiming a budget surplus, is pushing us towards it.

Given the Frydenberg/Morrison surplus fixation, it might be dangerous to let slip that there’s a way of stimulating the economy without increasing government debt, yet tightly controlled helicopter money could prove a better option than the more conventional unconventional.

The RBA would need to be very well prepared in advance, the limits clear and warnings explicit.

Kids and sticks of dynamite are not a good mix.

P.S. Just because BlackRock is massive and employs some brilliant people doesn’t mean the firm is always right. The BlackRock Australian Share Fund is a dog, charging above-average fees for below-average performance. It was ranked 347th out of 347 Australian equity funds over the past year. Maybe Mr Hildebrand should have someone take a look at that.

The economic weapon too hot for the RBA to mention: Helicopter money