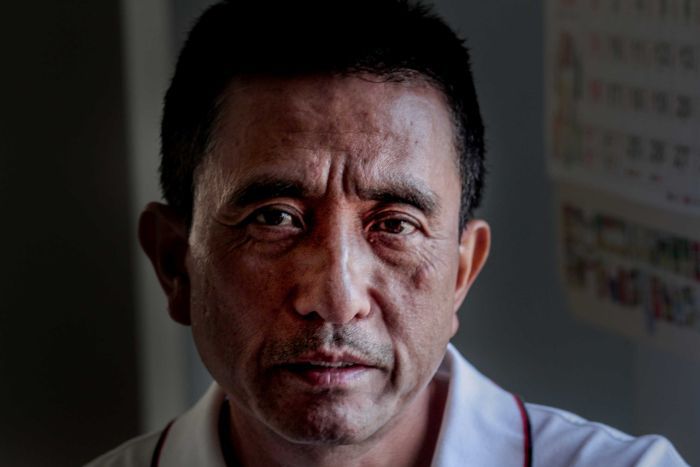 Stanley Xie feels angry and frustrated. Most of all, he feels a sense of guilt.

“Because of me, they lost their money,” he said.

“Because of my sales, because I pushed. Because I allowed such a tragedy to happen.”

Mr Xie was a salesman with the property developer giant Ralan Group prior to its spectacular financial collapse that has left thousands of investors in its wake.

As a Ralan salesman, Mr Xie’s job was to spruik a form of property investment the company’s administrator now says was legally questionable.

He is speaking out about what he saw at the property behemoth in the hope it will help the 2,300 investors who have watched almost $300 million worth of deposits in off-the-plan apartments vanish.

“This is a big tragedy because for many of the clients, their money was not easy to make,” he said.

More to collapse than just a bad market

When Ralan Group went into administration in July with debts of $500 million and five unfinished projects, its demise was seen by some as a symptom of the downturn in Australia’s apartment market.

But there is a more complex side to this massive corporate collapse.

The ABC has obtained contracts that show Ralan was asking homebuyers to release their deposits as extremely risky loans to the company in return for 15 per cent annual interest.

Because the loans were not secured to Ralan’s assets, investors who agreed to release their deposits to the company are unlikely to get any of their money back now it has collapsed.

Accounts released by the administrator reveal only a fraction of investors’ deposits remain in trust accounts set up for each development — the rest is believed to have been spent on Ralan’s business costs and paying off previous investors’ interest.

The case has raised concerns about this method of financing off-the-plan developments being used across the industry.

Said Jahani from administrator Grant Thornton said Ralan could be referred to the Australian Securities and Investments Commission for investigation into whether the loans are in breach of laws designed to protect investors.

“Once you start raising money beyond 20 people, you need to have licenses from ASIC, you need to follow strict protocols in terms of how you produce documents, like a product disclosure statement. None of that was actually done by Ralan,” he said.

Mr Jahani is now digging through the Ralan’s financial records to find out how long the 21-year-old company has been tapping investors for cash.

“From what we can tell, they’ve been doing this right from the beginning,” he said.

“That created a massive flow of funds into Ralan. As long as they kept developing the next project, they always had the next presale going and allowing that to then continue to fund the working capital for the business.”

The Ralan Group’s founder and sole director William O’Dwyer has declined interview requests. Through his lawyers, he said he deeply regrets the stress and anxiety caused to creditors.

“We stress that any negative publicity in relation to our client and the Ralan Group could jeopardise any rescue or restructure proposal,” his lawyer said in an email.

The company’s immediate future is being led by the administrators and receivers appointed by Ralan’s major lenders, including Westpac and the boutique financier Wingate.

Both lenders deny any knowledge of the investor loan agreements, however they are now facing the threat of at least three separate class actions being investigated on behalf of investors who say Westpac and Wingate have profited from their losses.

When approached in person by the ABC, Mr O’Dwyer said he was “working vigorously with the administrator” but refused to answer specific questions.

There is another side to Ralan’s model.

Most investors caught up in the collapse are Chinese-Australians who were targeted by Ralan’s team of Mandarin and Cantonese salespeople.

Former bus driver Ben Huang and his family invested $250,000 in three off-the-plan apartments after receiving an unsolicited phone call from a Ralan salesperson in 2013.

“At that time, I wanted to help my son get into the market,” he said.

Because he agreed to release his deposits as loans to the company, Mr Huang now stands to lose the lot.

His son Aaron, who personally contributed $40,000 to the investment, said the collapse was a financial disaster for his parents.

“We’re losing sleep because of this, because we literally lost all our money,” he said.

When Mr Xie was a salesman for Ralan Group, he came up with a simple method for finding new customers.

He would open the Sydney White Pages and start trawling for Chinese names.

“For example, my surname Xie. Or Wong. Or Chen,” he said.

He said some of his clients were experienced investors, while others were putting money into property for the first time.

Mr Xie, who said he had no role in formulating contracts for clients, also used his networks within Sydney’s Chinese community to find investors.

He met small business owner Leon Chen through a community group and in 2013 convinced him to invest $250,000 in two units.

“I am young and I can still come back from it, compared to the older retired people. They probably invested in this to try to get some more income to support their life, but now they’ve lost everything.”

The ABC has spoken to several Ralan investors who were referred to the company through friends or relatives.

Mr Chen convinced members of his extended family in China to invest with the company.

“They just trust me, and now I’ve lost my trust. What can I say to them?”

Mr Chen is among about 300 investors who have registered their interest in a class action law suit being investigated by Sydney lawyer Matthew Bransgrove.

“A lot of them are in shock,” Mr Bransgrove said.

Mr Bransgrove said the class action would likely focus on Westpac and Wingate.

“If the evidence shows that Westpac and Wingate know that this was going on, then it’s a very strong case,” he said.

In a statement, Wingate said it did not know of the lending arrangements Ralan reached with purchasers.

“Wingate strongly rejects any suggestion that Wingate was anything other than a secured lender to Ralan’s development projects.”

Westpac declined to comment in detail because of “customer confidentiality.”

“At the time the Ralan Group went into administration, Westpac’s major financial exposure was the development of a complex in NSW,” the bank said in statement.

That complex is a 318-unit apartment building in the Sydney suburb of Arncliffe, which the administrator has said is about 60 per cent complete.

In November last year, the company completed the first stage of the four-tower Ruby Collection of buildings in Surfers Paradise.

Construction has yet to begin on stages two, three and four, as well as the nearby 673-unit Sapphire development.