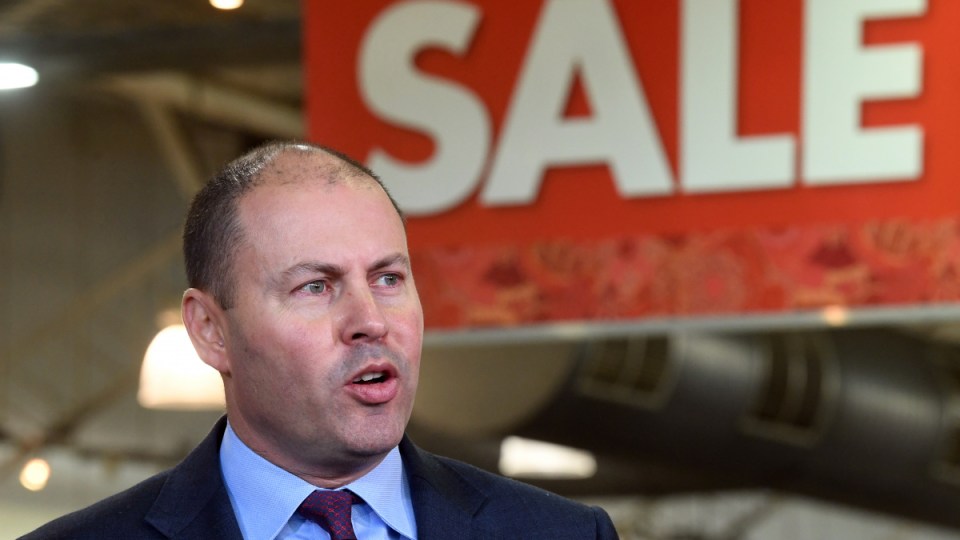 Josh Frydenberg's response to the dismal GDP figures was to deflect attention to the RBA. Photo: AAP
analysis

Oh this is rich. As we suspected here a week ago, Josh Frydenberg is attempting to deflect blame onto the Reserve Bank for Australia’s weakest financial year since the 1990-91 recession.

There was nothing accidental in the Treasurer’s Wednesday timing in announcing that he wanted to “strengthen” the inflation target agreement with the RBA.

He was in the middle of trying to gloss over his achievement of entering the record books as the Treasurer equalling over the lowest financial year economic growth in 28 years.

“Look over there! The RBA has failed to deliver its inflation target!”

As we reported, it’s normal for a Treasurer and RBA governor to formalise their post-election agreement on the RBA’s responsibilities within days, if not weeks. It’s now getting towards four months.

With the economy weak, productivity growth miserable and unemployment rising, the government has reaffirmed its commitment to delivering a budget surplus rather than offering any of the extra stimulus or policy initiatives the RBA has been recommending.

As an Australian Financial Review report summarised it: “The Morrison government is resisting calls for a short-term fiscal stimulus to the softening economy, instead putting more pressure on the Reserve Bank of Australia to cut interest rates and offering an investment tax incentive in next year’s budget.”

“Next year’s budget” suggests a policy change for the 2020-21 year, which, if business takes up the unspecified incentive with the usual delays, is unlikely to be felt until late next year. That could indeed be a bit late.”

So the government is doubling down on monetary policy, on pressuring the RBA to continue to cut interest rates while fiscal policy becomes contractionary through chasing the elusive budget surplus headline.

The apparent haggling between the RBA and Treasury over the agreement would make interesting reading.

The governor’s Jackson Hole speech might be seen to be all the more pointed about “some political systems” wanting to place all the responsibility for the economy on the central bank.

For his part, Treasurer Frydenberg achieved a useful diversion by casting aspersions on the RBA’s performance.

“It is not going to be a radical change, but there is a discussion about maybe ways we can strengthen that agreement, strengthen that target to ensure that we continue to see inflation where the Reserve Bank and the government want it to be,” he said.

You see what he did there?

The political imperative of trying to win or at least draw the daily media cycle was at play – forget about owning our economic reality and dealing with it.

And what is taking so many months to work out?

The AFR reckons: “Reserve Bank governor Philip Lowe will be required to write to Treasurer Josh Frydenberg explaining why the central bank has missed its inflation target, a move likely to raise pressure to cut interest rates further.”

A letter to the Treasurer – well that will sort everything out.

The next step could be the governor writing out 100 times “I must try harder” and getting his parents to sign it.

It is easy to chastise the RBA for not being ahead of the game.

Heaven knows the governor’s explanation for not cutting rates in May, just ahead of the election, waiting until June, has been less than reassuring.

And the RBA’s economic forecasting, along with the rest of the official family, has been hopelessly optimistic for years, especially on wages growth.

Its tardiness in lowering its NAIRU guesstimate (the non-accelerating inflation rate of unemployment) has been risible, and its blindness to key factors in wages suppression has been frustrating.

But as everyone appreciates, forecasting is so much easier in retrospect.

The RBA, Treasury, Finance, PM&C and ABS all sup from the same forecasting bowl – albeit with slightly different seasoning.

In its defence, the RBA recognised in May the economy was deteriorating, a recognition the Prime Minister wilfully misinterpreted, being locked in election “strong economy” denial.

More importantly though, the RBA has been brave enough to venture beyond its monetary remit to “speak truth to power” on fiscal policy, infrastructure investment and productivity issues.

That has become embarrassing for the government.

Forcing the governor into his infamous photo op, and now the agreement delay stunt, look a bit like Mr Frydenberg trying to put the bank back in its box.

That might make the Treasurer feel a little better while the record book makes him look like a dud; it does nothing to make the economy feel better.