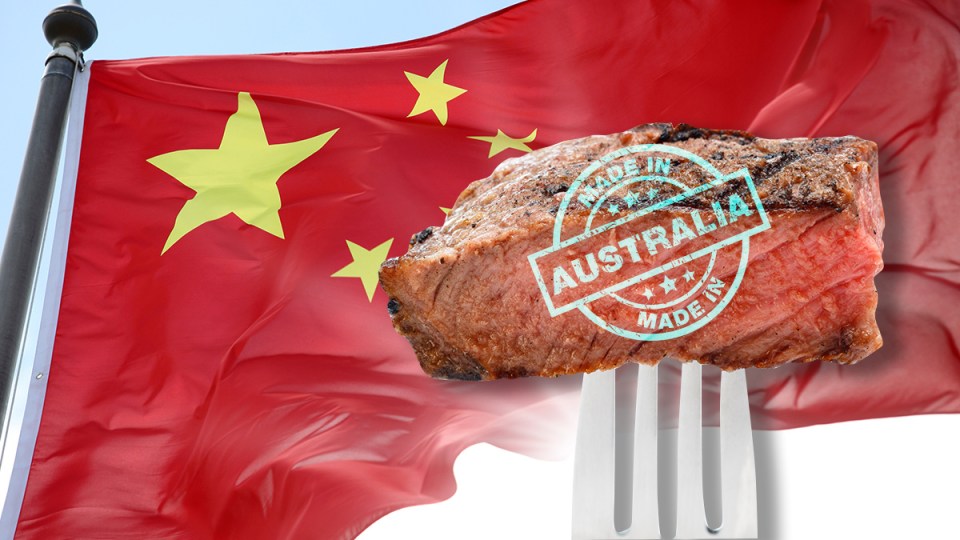 China's trade bans have every export industry with the exception of iron ore. Photo: The New Daily

Australia is suffering ongoing anxiety over its relationship with China as our economic ties continue to deepen.

The growing fear even hit Mandarin-speaking former PM Kevin Rudd who lashed out at “post-pubescent politicians” whipping up “hysteria” about the Asian economic dragon.

Those remarks followed highly publicised comments by Liberal MP Andrew Hastie who warned Australian sovereignty and freedoms could be diminished by China’s influence.

The reason China now casts such a long shadow over Australian life is, of course, economic. And the magnitude of that economic influence is truly staggering.

China now accounts for a massive 33 per cent of our merchandise exports.

At $133.8 billion in 2018-19, its purchases total more than those of the next four contenders, Japan, Korea, India and the European Union, combined.

As the graph above shows, since 2010 the Chinese export line has progressed almost vertically. Last year alone exports grew 20.4 per cent.

Traditionally those exports have been iron ore and coal, but high end agricultural products like beef, wine and cheese are rapidly becoming more popular “as the Chinese economy becomes more consumption focused,” said James Laurenceson, director of the Australia-China Relations Institute at University of Technology Sydney. 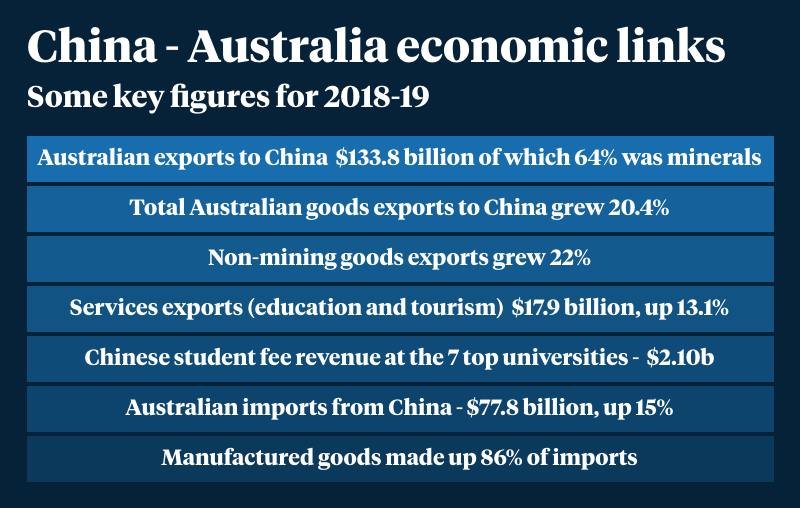 And what we buy from China is also on the rise. Last financial year imports topped $17.9 billion and grew at 15.1 per cent.

“That’s three times the rate of imports from the rest of the world,” Professor Laurenceson said.

But the Australia-China relationship is not only built on commerce, and researchers from both countries are increasingly pooling brains and resources – with China “set to overtake the US as Australia’s biggest research partner,” Professor Laurenceson said.

The one part of the relationship that is not getting stronger is investment. China and Australia have a total of $130 billion invested in each other’s economies and that is minuscule compared to the over $1 trillion with the US.

Despite populist concerns about China buying up residential property and farmland, last year Chinese investment in Australia dipped a massive 36.3 per cent to $8.2 billion.

Of that 87 per cent was financed by private investors with the Chinese government responsible for only 13 per cent.

“At the moment the motivation to invest is not as big as it was,” said Dr  Sizhong Sun, an economist at James Cook University.

“The economy in China is not as good as it was and the climate in Australia is more difficult” (following tighter foreign investment laws and political concerns on investment in infrastructure).

With the Chinese behemoth dominating the economy there is much anxiety about how China will react to the at times heated political and community debate of recent times.

Dr Sun says this should not be a concern as “the focus is on the bigger issue of the China-US trade dispute”.

Another respected China watcher who could not be named said the relationship is different to that Australia has had with once-dominant economic powers like the US and the UK.

“The US might say sometimes ‘we need you to do this or that’ but we don’t have to follow that if we don’t see it as in our interests. China uses companies, institutions, family and personal relationships to try to manipulate political outcomes; the US doesn’t do that.”

Professor Laurenceson said “with China you have to be definite. When something requires pushback you do that but you don’t let differences define the relationship.”

“The important thing is that you view the China relationship through Australian eyes, not Washington’s eyes. Washington sees China as a strategic threat whereas Australia must not lose sight of the opportunities and benefits in the relationship.”