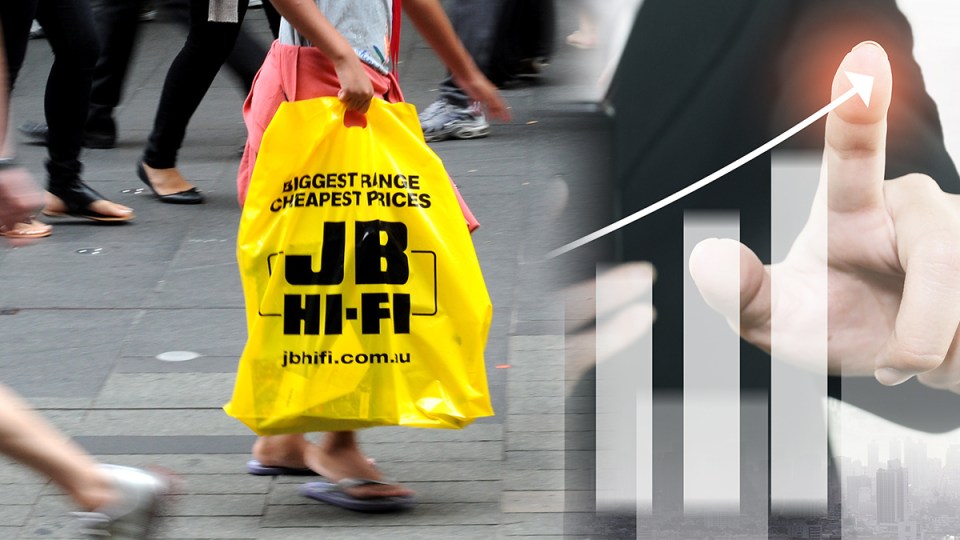 JB Hi-Fi has boomed on the back of the perception of it being good value for money. Photo: The New Daily

In a time of low wages growth and sluggish consumer spending, there haven’t been many good news stories coming out of the retail sector.

But one retailer is bucking the trend, posting yet another year of healthy sales and profit growth thanks largely to its signature, low-frills fit-outs and staff product knowledge.

The annual profit of electronics and white-goods giant JB Hi-Fi rose 7.1 per cent to $249.8 million in the year to June 30, above the market’s expectations of $245 million.

Chief executive Richard Murray said games, smart-home devices and fitness devices were the stand-out performers, as the group’s largest business, its JB Hi-Fi stores, saw a 4.1 per cent growth in sales to $4.73 billion.

That result comes despite tumbling sales of DVDs and CDs, and also contrasts sharply with the fortunes of other retailers – retail turnover rose only 0.4 per cent in June, with that of department stores falling by 0.6 per cent.

The JB Hi-Fi announcement comes just a week after David Jones’ parent company, South Africa-based Woolworths Holdings (no relation to Woolworths supermarkets), announced it had written off $437 million from the store’s valuation.

That left the once-dominant department store valued at $965 million; less than half the $2.2 billion Woolworths Holdings paid for it in 2014.

Executive director of the Australian Retailers Association Russell Zimmerman said JB was simply “one of the great retailers”, ascribing much of the success to its low-frills fitouts and staff knowledge.

“When I go into a JB Hi-Fi store, I get that feeling that I am not paying for a whole lot of frills, and that I’m getting great value for money,” he said. “And you have staff in there who always know what they are talking about.”

He also praised its chief executive for his ability to read his market and for fostering a good corporate culture.

“Richard Murray has an innate understanding of the market and has got some great people in place,” Mr Zimmerman said.

“From top to bottom, a good organisation relies on a good CEO, and in Richard Murray you have a very astute CEO.”

He also highlighted the company’s approach to social responsibility, that is, its Giving Back program in which the company matches staff donations dollar for dollar to a range of nine not-for-profit organisations.

According to JB’s figures, more than 6000 staff (or 81 per cent) contribute to the program each week.

“I think when you get staff who are engaged with the company in that way, they understand the ethos of the place, and that makes the people in the organisation want to belong.”

Colin Barnard, a commercial director with internet advertising specialists Criteo, said JB Hi-Fi had created an “incredible in-store format that has really appealed to Aussies and has successfully evolved with the times”.

“I think JB Hi-Fi and The Good Guys benefit by their store footprint, and especially JB Hi-Fi’s bargains and offers that bring customers in with one purchase in mind and then cross-sell to other product,” Mr Barnard said.

And given the company’s online sales were only 5.5 per cent of total sales, there is plenty of scope for the company to keep growing by improving its online offering.

Mr Barnard said a NAB ecommerce report found that online sales in Australia were about 9 per cent of traditional bricks-and-mortar sales, while comparable tech retailers in the UK, US and France had online sales ranging from 14 to 22 per cent.

“As their logistics have improved and their website presence is due to make a dramatic shift forward, I would be flagging them for significant growth and success online,” Mr Barnard said.

“The trick will be to do that and enhance the in-store sales growth rather than cannibalise it. We know that many of the world’s best multi-channel retailers recognise the benefits that online shopping brings to in-store sales and vice versa but it can be a double-edged sword.

How JB Hi-Fi has managed to defy the retail slump