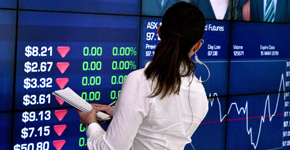 The ASX 200 has beaten its previous record high from November 2007. Photo: AAP

The Australian sharemarket’s benchmark index has hit an all-time high after the S&P/ASX200 broke through the record mark last reached more than 11 years ago.

After that, it briefly slipped back below the pre-global financial crisis milestone.

The ASX200 was introduced in March 2000 with a value of 3133.3 points as an index of the 200 largest companies on the Australian Securities Exchange.

The wider Australian sharemarket lost 54 per cent in the 16 months after its peak in November 2007 amid the GFC as the ASX200 bottomed out in February 2009.

AMP Capital economist Shane Oliver said the fact that the Reserve Bank was relatively tepid in cutting interest rates after the GFC was one of the reasons it had taken the ASX longer to recover compared to share markets in many other countries.

“Whereas the US, Europe and Japan had near zero interest rates and quantitative easing, Australia has had much higher interest rates [until just recently] and no money printing,” he said in a note on Tuesday.

The broader All Ordinaries index – which is made up of the 500 largest companies on the ASX – broke records of its own last week, finishing on Wednesday at a record high and surpassing its intra-day high on Thursday.