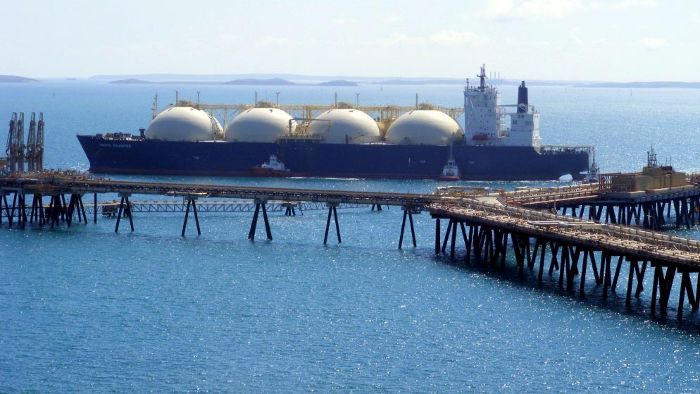 Australia’s LNG production leapt 21 per cent in the past financial year to 75.1 million tonnes, according to data from energy advisory company EnergyQuest.

The Department of Industry, Innovation and Science also reported in March that Australia’s LNG exports were forecast to increase from $32 billion in 2017-18 to a peak of $51 billion in 2019-20.

World champions in LNG: Great news for the economy, you might think, with those rivers of resource royalties flowing in to government coffers.

The reality, though, is vastly different.

In 2017-18, LNG companies in Australia had revenue totalling $29.7 billion, yet paid just $1.07 billion in royalties levied under the petroleum resource rent tax (PRRT).

By comparison, Qatar, a close second behind Australia in production, received a staggering $26 billion in royalties.

Bruce Robertson, an investment analyst with the Institute for Energy Economics and Financial Analysis (IEEFA), said the PRRT was essentially a bad joke that was robbing Australia of what it was entitled to – the dividend from its gas resources.

Mr Robertson cited a report by consultants ACIL Allen which predicted the Ichthys LNG project (off the coast of north-west WA) will export a whopping $195 billion of LNG, LPG and condensate out of Darwin over the next three decades, but would not pay a cent in royalties to the federal government – in its lifetime.

As the PRRT is levied on a company’s profits, rather than production, Mr Robertson said the gas producers deftly structured their balance sheets to minimise profits within their Australian operations.

“I have no doubt this [PRRT] was designed in good faith, but these gas companies are very good at having their projects in Australia not making any money for them,” Mr Robertson said.

“The only solution for the PRRT is basically to scrap it and start over again with a proper royalties scheme.”

Jason Ward, the principal analyst with the Centre for International Corporate Tax Accountability, told The New Daily that Australia’s “fiscal regime for oil and gas production was one of the most generous in the world”, calling the PRRT a “major national policy failure”.

And what was also galling was the fact that 87 per cent of new LNG projects in Australia were owned by foreign multinationals, such as Chevron, ExxonMobil and Shell.

“They [the LNG companies] are pumping out the world’s largest volumes of LNG and essentially paying nothing for it,” Mr Ward said.

“To be fair, they have poured billions of dollars into infrastructure and do need to recoup those investment costs.

“But essentially what this means is that the Australian taxpayers are the ones who are taking the risk on these projects, not the companies themselves.

“And Chevron and ExxonMobil have openly admitted to the government that they don’t expect to pay any PRRT until the mid-2030s.”

Mr Ward said he made a submission to a Treasury review into PRRT arrangements for LNG in which he proposed changes that he claimed would result in about $90 billion in revenue from 2027 to 2050, or more than $3 billion a year.

“There’s basically $90 billion to be had with just a minor tweak,” he said.

In response to the public outcry over the amounts of PRRT paid by the gas companies, the government this year made a change to the rate at which projects can offset their exploration expenditure against profits.

Earlier this year, then Assistant Treasurer Stuart Robert said the changes would generate $6 billion over 10 years in royalties.

Mr Robertson said some of the gas projects on WA’s north-west shelf had a royalties arrangement with the WA government, and onshore gas producers in Queensland also paid royalties to the Queensland government.

However, he said in Queensland’s case, they were consistently below expectation.

In a series of articles on tax avoidance published in The New Daily earlier this year, investigative journalist Michael West found that despite a cashflow of $11.3 billion in 2017, ExxonMobil managed to pay no company tax in the four years to 2017. It had done so via “massive debt-loading”, West found.

In response to West’s questions, Exxon-Mobil responded as follows:

“We have made significant contribution to Australia’s economic wellbeing through the reliable supply of energy that helps fuel growth and $40 billion in the country. We have paid more than $2 billion in corporate income tax alone since 2000, as well as more than $13 billion in PRRT since 1990.

“On average more than $600 million has been paid to the federal government each year for over a quarter of a century. With a total investment of more than $21 billion since 2010, of which 85 per cent has been invested over the past six years, we are a substantial investor in the Australian economy and a major contributor to the wealth of the nation.”

The LNG industry is booming. So why are we not getting the royalties?