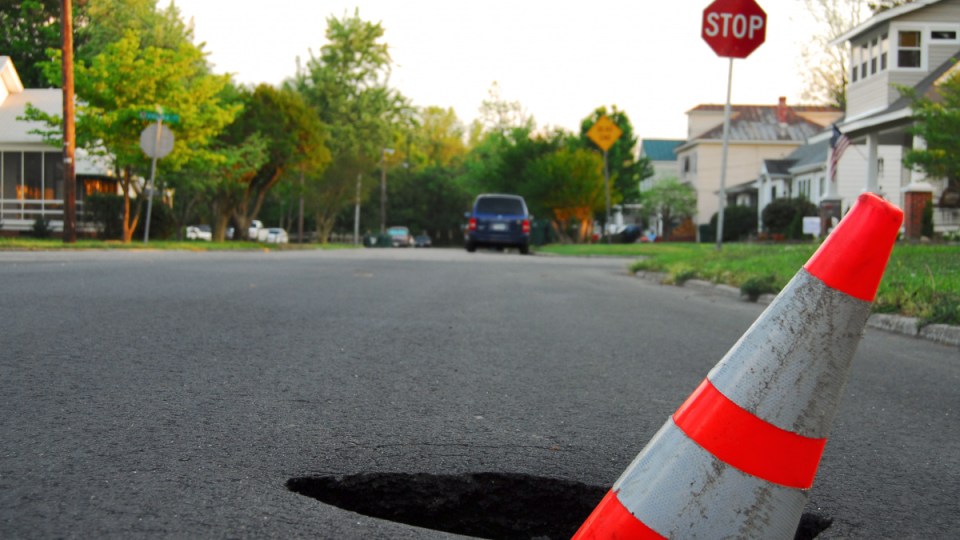 Addressing simple issues such as potholes could provide a big boost to the economy. Photo: Getty

Peter Colacino, executive director of policy and research at Infrastructure Australia, told The New Daily that simply “addressing maintenance backlogs” – that is, fixing sub-standard roads – could give the economy an immediate and bigger boost than investing in major road and public transport projects.

“It’s clear that looking at maintenance as well as the medium- and larger-scale projects that are on our priority list could play a role in progressing the productivity agenda,” he said.

“In [the National Road and Maintenance Associations] last report, which came out about 18 months ago, local governments identified their [road] maintenance backlog to be $1.9 billion in NSW alone.”

Because it’s quick and easy to fix potholes and address minor maintenance issues, Mr Colacino said focusing on these issues would provide an immediate shot in the arm of the economy, whereas the benefits of building new roads would take much longer to flow through.

“And generally these issues are well scoped and well known, because in order to identify it as a backlog, you need to have an idea of what the work is,” he said.

“And in order for it to be costed, you need to have done some planning.”

However, Mr Colacino cautioned governments not to rush through poorly researched projects in a bid to revive the ailing economy.

“We want to avoid a situation where we’re investing in infrastructure but it’s not delivering a long-term productivity benefit,” he said.

“We need to make sure that we have the right skills in the public service so that projects aren’t rushed, and to make sure that bidding periods are adequate … otherwise you could forgo some of the long-term productivity benefits.”

“I’m of the view that you build infrastructure if it needs doing, not because it’s cheap or the part of the cycle,” he said.

“If there is going to be an infrastructure pick-up, for the sake of the economy, you’ve got to do stuff that you can roll out very quickly.”

Mr Koukoulas said investments in renewable energy or social housing could offer good bang for buck, before adding that the latter option would safeguard jobs in Australia’s wobbly construction industry, too.

“I’m sure you could get some jobs and activity going in the construction industry by doing that [building social housing],” he said.

“So it’s things like that, rather than let’s build a road from A to B.”

In a Sydney Morning Herald article on July 3, Brendan Coates and Danielle Wood argued that Treasurer Josh Frydenberg should emulate the Rudd administration’s 2008 Social Housing Initiative as a matter of urgency.

They said the scheme built 20,000 new social housing units and refurbished a further 80,000 – activity that led to a spike in residential construction approvals.

“A repeat today would provide a much-needed boost to housing construction when the pipeline is at risk of drying up,” Mr Coates and Ms Wood wrote, before adding that raising Newstart was a no-brainer, too.

“Although a permanent rather than temporary budget hit, raising Newstart would bring forward something all but the most hard-headed Australians acknowledge needs to be done anyway.

“And boosting the payment would be immediate stimulus – it puts money in the hands of the people most likely to spend every cent.”