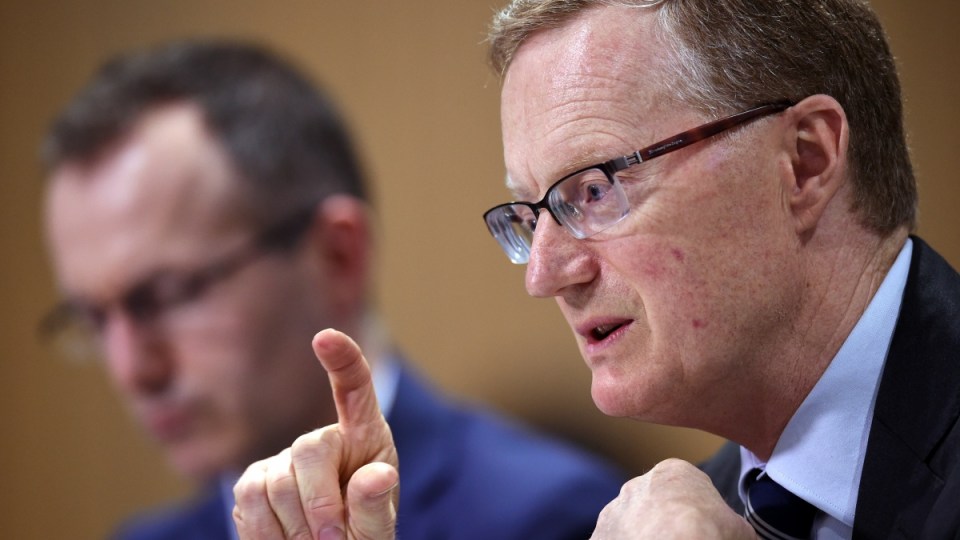 The Reserve Bank’s decision to leave official interest rates unchanged is understandable. But also perplexing and rather sad.

It’s a triumph of hope over experience, an indication the RBA still preferences economic theory over real-world experience.

And while it was a relief for Scott Morrison and Josh Frydenberg to not have our central bank publicly call out their economic management with a rate cut before the election, only the foolish or wilfully partisan could see the governor’s brief comments as anything other than damning with faint praise.

Sitting pat for yet another month is understandable because, as argued before, cutting rates would achieve little in the near term, which is where the economy needs help.

And the RBA would like to keep as much powder as possible dry in case Donald Trump’s trade war with China gets much worse and/or Australia mishandles its relationship with Beijing with serious consequences.

Besides, the markets continue to take for granted that the RBA will eventually cut this year, thus much of the impact has already been factored into our exchange rate and bank funding costs.

Nonetheless, this week’s decision is sad because Governor Lowe’s brief post-meeting statement itself shows the bank’s attempt to put a brave face on the economic outlook has worn very thin.

The governor spells out our core immediate problem and the RBA’s sense of helplessness in two sentences: “The main domestic uncertainty continues to be the outlook for household consumption, which is being affected by a protracted period of low income growth and declining housing prices. Some pick-up in growth in household disposable income is expected and this should support consumption.“

The RBA has been predicting higher wages growth ever since before it started weakening. Year after year after year, wages have been about to run higher, according to the RBA – but they haven’t. That the governor is reduced to a wan “some pick-up” might indicate how confidence in that permanent forecast is fading.

The bank’s commentary keeps clutching at hints of green shoots on the wages front, only to find they’re straws.

The harsh and undeniable reality is that two of our three biggest employers – construction and retail – are getting weaker and there’s no reason to believe it’s about to change. Yes, infrastructure overwhelmingly financed by the states is strong, but housing approvals are continuing to slide.

To quote an AI Group construction report released on the day of the RBA board meeting: “The Australian Industry Group/Housing Industry Association Australian Performance of Construction Index dropped a further 3.0 points to 42.6 in April, with a return to growth in engineering construction failing to offset continued declines in housing activity, commercial construction and apartment building work (readings below 50 indicate contraction in activity, with the distance from 50 indicating the strength of the decrease).”

As for retail, the NAB business conditions survey continues to show a negative outlook for retail employment.

The latest AI Group services sector index has retail at its lowest ebb since 2012 and as for the prospect of wage rises: “The average wages index fell 10.9 points to 48.2 in April, indicating a fall in wage pressure across the services sectors. This was the lowest monthly result recorded in this data series, and only the second time average wages growth has contracted (the previous occurrence was 49.4 points in July 2016).”

A straw the RBA points to is “a pick-up in activity in the resources sector”. There is indeed a strong pick-up in resources thanks to higher commodity prices, but what the RBA doesn’t understand is that the wealth is failing to trickle down – the big miners are continuing to screw down their contractors.

The RBA’s decision to pretend it doesn’t need to cut, to stress the glass is half-full, is perplexing for two reasons.

Firstly, the RBA knows full well the consumer can be nothing but constrained after years of negative real take-home wages.

It was detailed in a speech by assistant governor Luci Ellis in March. 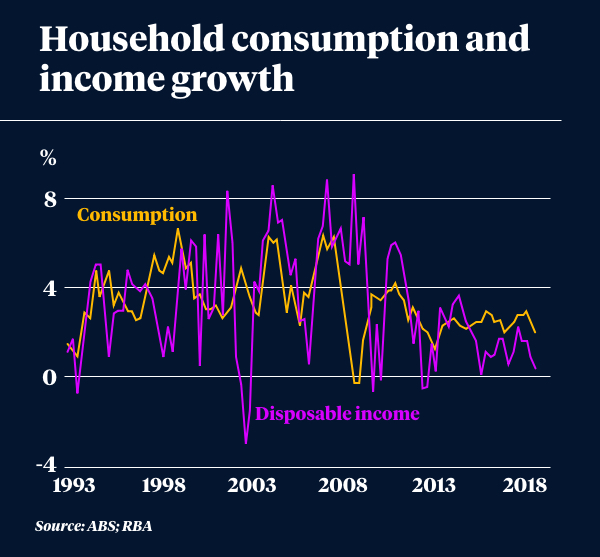 For five years, household spending growth has been running ahead of income growth. That’s simply not sustainable. The gap between consumption and income has come home to roost as spending has been curtailed, with all the danger of creating negative feedback. 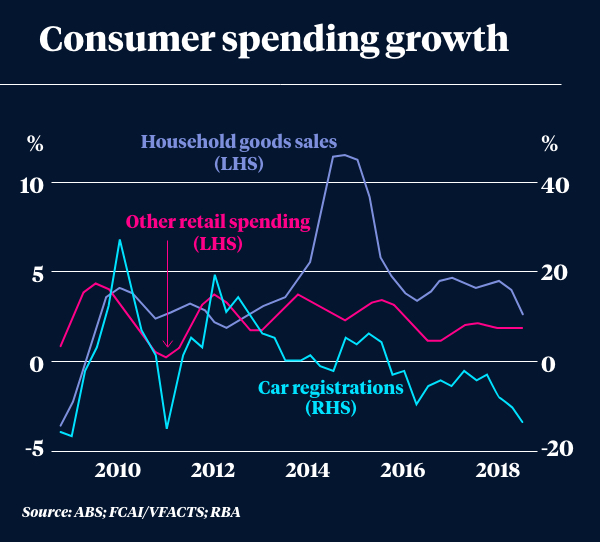 The New Daily has been recording the new vehicle sales indicator all this financial year. The latest instalment was a 22 per cent dive in April compared with the same month last year.

The second reason Governor Lowe’s statement is perplexing is that it contradicts itself.

In his concluding paragraph, Dr Lowe reports that the board recognised “there was still spare capacity in the economy and that a further improvement in the labour market was likely to be needed for inflation to be consistent with the target”.

But earlier in the piece: “The unemployment rate has been broadly steady at around 5 per cent over this time and is expected to remain around this level over the next year or so, before declining a little to 4¾ per cent in 2021.”

So there you have the biggest mystery. After our inflation rate collapsed in the March quarter, the RBA says we have to have a stronger labour market to get inflation up, but then predicts no improvement in the labour market until some time in 2021, and then not much at all.

The present evidence is that the unemployment rate would need to be at least 4.5 per cent or less before it could be expected to produce anything like inflationary pressure.

Unless, unless … has Governor Lowe just launched a de facto abandonment of the RBA’s 2 to 3 per cent CPI target?

The RBA – a triumph of hope over experience