Subscribe direct to our news source →
Finance Finance News Tony Abbott under pressure over hospitals sale to Cayman Islands entity 12:05am, May 1, 2019 Updated: 9:09am, May 3

Tony Abbott has come under pressure from Warringah independent candidate Zali Steggall over the government’s decision to approve the sale of the new Northern Beaches Hospital, and 42 other Australian hospitals, to an obscure company in the Cayman Islands.

Ms Steggall, an Olympic skier turned barrister, and Alice Thompson, the independent candidate for Mackellar in Sydney’s northern beaches, have written to Treasurer Josh Frydenberg and shadow treasurer Chris Bowen to ask them to intervene in the $5 billion takeover of Healthscope by Brookfield.

Brookfield, a Canadian asset management group, has a track record of tax avoidance.

Its entities have been identified in the Panama and Paradise papers data leaks and, in Australia, it pays little corporate income tax as its assets are structured through trusts, and profits are siphoned offshore to tax havens.

Ms Steggall and Ms Thompson join Greens candidate Julian Burnside – who is running against Treasurer Josh Frydenberg in the Melbourne seat of Kooyong – in opposing the deal.

“It is not in the national or public interest for Northern Beaches public hospital services to be on-sold to a foreign company, run for profit, and operated out of a tax haven,” says the letter from Ms Steggall and Ms Thompson.

“Over $2 billion of taxpayers’ money has been invested in the new hospital.”

The new hospital services a population of 256,000, write the two independents, noting there was a complete lack of community consultation over the deal.

Indeed, as the contractual documents between the NSW government and Healthscope remain a secret, it is impossible to know what assurances have been given regarding the provision of essential health services.

Moreover, as Cayman Islands is a secrecy jurisdiction, the identity of the directors of the entity that controls the hospitals in Australia remains a secret. Every state and territory has a Healthscope hospital. As part of the financing arrangements for the transaction, Healthscope will be divided up, its $2 billion worth of hospital property sold to two foreign property groups and leased back by the operators.

What the takeover documents – filed recently with the ASX show – is a tricky bidding structure with three Australian entities owned by a Caymans entity. 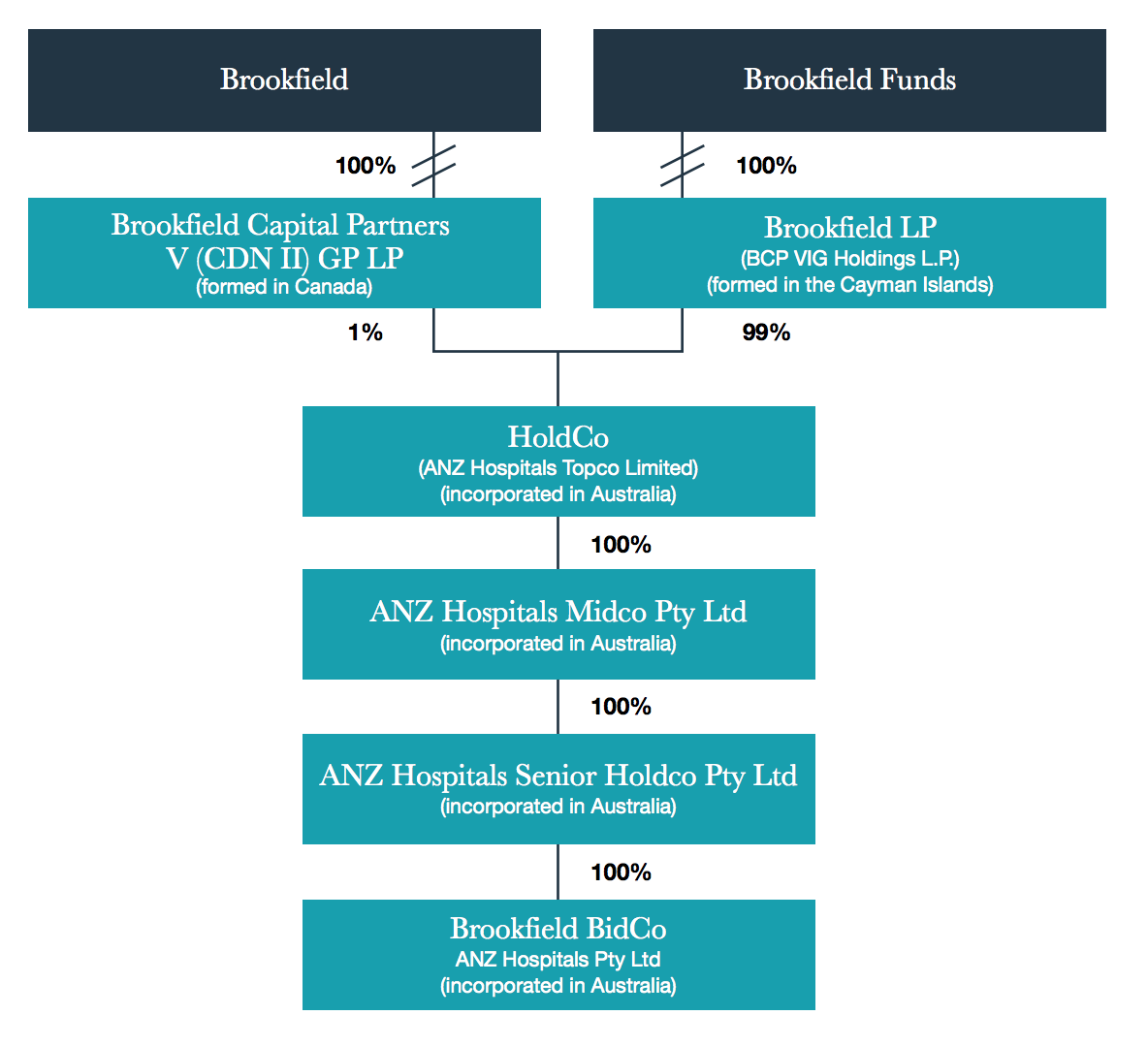 The Australian companies have identical directors: Three from the eastern suburbs of Sydney, one from New Jersey and another from Toronto.

The maze of companies is typical of Brookfield financial engineering. The accounts for another Brookfield entity in Australia analysed earlier this year, BIPH, show $920 million was sent to the Bermuda parent company over two years while no income tax was paid.

If the deal proceeds, 43 Australian hospitals will be transferred from a visible, ASX-listed company whose directors are publicly accountable, to a tax haven-controlled, obscure structure operated by financial engineers rather than hospital people.

It is likely to be highly leveraged, which increases the risk, both for future patients and taxpayers.

For more details of Michael West’s investigation into the sale of hospitals to Brookfield, you can visit his website, here.