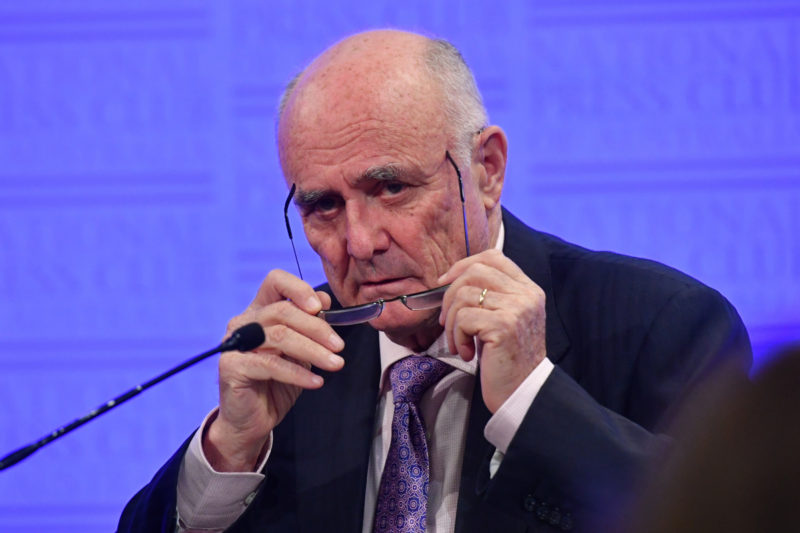 The Hayne banking royal commission let the banks off the hook, delivering a weak final report, according to former competition tsar Allan Fels.

Speaking on Wednesday at the conference of major superannuation funds on the Gold Coast, Professor Fels said he “was surprised” at the final report which “let the banks off a bit lightly”, he said.

The recommendations of the commission would have “less impact on organisations than I thought should have occurred”.

“I was a bit disappointed with the recommendations,” he said.

Professor Fels said earlier this month many of the recommendations were aimed at “smaller fry”, such as mortgage brokers and commission agents.

The commission recommended “no deep structural change” and relied on “regulators and changed culture to put things to right”, Professor Fels said.

The commission was essentially a “lawyers report” that steered clear of important issues like “should the banks at all be in the fields of wealth management or providing superannuation?” Professor Fels said.

“Kenneth Hayne stayed away from vertical integration [banks owning businesses feeding into each other],” he said.

Adele Ferguson, award-winning investigative journalist with Fairfax Media, said the commission “really squibbed” on taking tough action and that she was surprised at the level of greed and corruption revealed at its hearings.

Ian Silk, CEO of AustralianSuper, the country’s largest fund with $140 billion under management, said the commission had been unbalanced in its approach to dealing with super.

“I had thought that when it concentrated on Nulis [NAB’s super operation] for almost half the super fortnight”, it would have used that as an example of what was happening with the industry generally, Mr Silk said.

But the commission report focused on NAB, and the result was the replacement of chair Ken Henry and CEO Andrew Thorburn.

“I’m very surprised the final report singled out NAB in the way it did,” Mr Silk said. “NAB were not outliers in their behaviour,” he said.

Regulators had been shown to be ineffective in doing their jobs but appeared to be toughening up following the commission’s focus on their shortcomings.

“Heaven help us if they don’t step up to the plate now,” Mr Silk said.  Despite the commission’s exposure of bank misconduct, “we haven’t seen many changes in personnel,” Mr Silk said.

Ferguson told the conference by video-link that several things surprised her about the commission process. One was the extent to which the regulators deferred to the banking industry, and another was the “massive scale” of the misconduct by financial institutions.

“It wasn’t just a few bad apples, it was systemic,” she said.

Professor Fels described the terms of reference of the commission as being “narrow”. He compared it to the Productivity Commission’s report into superannuation, which was “all about policy”.

He also said he did not favour using the Future Fund as a default superannuation fund to take workers’ contributions. That would result in competition issues because the fund did not operate on an equal footing with pooled funds, he said.