Australian women are still at least 12 years away from achieving financial equality with men, and lag behind the rest of the world in female economic empowerment, research shows.

As the nation marks International Women’s Day (March 8), the research shows women make up just 7 per cent of big-company CEOs, do the lion’s share of unpaid care work, are over-represented in part-time and casual work and are woefully under-represented in the halls of power.

And it will remain so for years, unless governments and workplaces rise to the challenge and address structural inequalities, experts have told The New Daily.

Achieving workplace and financial equality between men and women leads to major economic benefits, research shows, yet Australia remains a long way off.

Australia failed to improve its ranking on PwC’s 2019 Women in Work Index, which measures female economic empowerment in 33 OECD countries.

Iceland and Sweden took out first and second place followed by New Zealand, while Australia came in a distant 15th for the second year in a row. 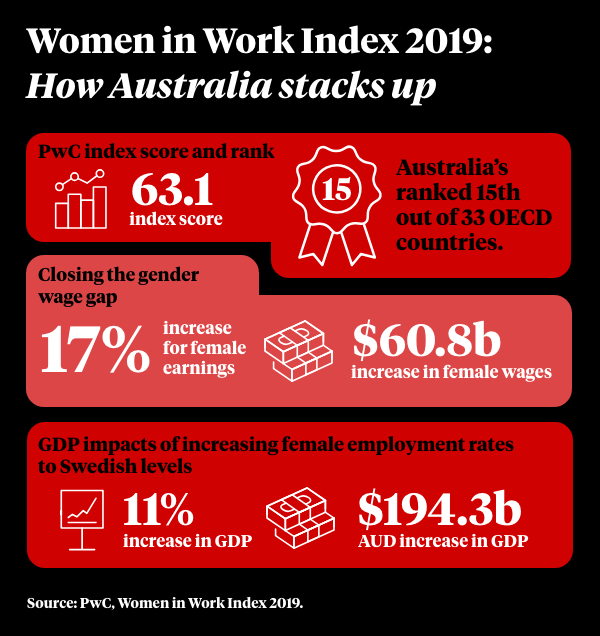 Improving female participation in work across the OECD would be a boon to member countries, with the potential boost to GDP of $US6 trillion ($8.5 trillion). Closing the gender pay gap could boost GDP by $US2 trillion ($2.84 trillion).

“The OECD continues to make gradual progress to improve female economic empowerment, but there is still a long way to go to achieve a gender-equal workplace,” PwC said.

Women are under-represented at leadership and management levels “and that has to be corrected very quickly”, Ms Hisgrove said.

Less than a third of board members on ASX-listed companies are women, figures show.

As long as you’ve got a disproportionate number of men in senior roles it’s very difficult to have true gender equality,” Ms Hisgrove said.

“It’s very clear that those numbers aren’t moving at the rate they should be, and there’s not much of an acceleration in the number of female CEOs and chairs.”

Businesses should have “the courage” to set targets to achieve parity between men and women in leadership roles, she said.

Structural barriers to female participation, such as a lack of flexible workplace arrangements and adequate parental leave, must also be addressed.

“Having access to flexible work arrangements for both men and women, but especially women returning from parental leave, is really important to ensure that women aren’t under-represented in leadership and management levels,” Ms Hisgrove said.

Women in Australia take on the vast majority of unpaid care work – 68 per cent of unpaid carers are women – and are far more likely to have to resort to insecure, low-paying jobs than men.

“If the workplace is not structured to be more amenable to women then you’re going to disadvantage the nation because you don’t get full economic participation,” Ms Hisgrove said.

Ms Hisgrove also pointed to the “paucity” of women in the Australian Parliament, where women occupy just 28 out of 76 seats in the Senate, and 45 of 150 seats in the House of Representatives.

“You cannot be what you cannot see, and a lot of young women growing up are looking at representation in our political sphere,” Ms Hisgrove said.

It’s not inspiring to see how few women are represented in Parliament.”

By contrast, New Zealand boasts the highest number of women in federal parliament in its history with women currently occupying almost 40 per cent – 45 out of 120 – of seats.

Prime Minister Jacinda Ardern is “having an amazing influence” and “casting the die on equity of access for women”, Ms Hisgrove said.

Much more work must be done by government and businesses to close the gender pay gap between women and men, experts told The New Daily.

At the current rate of progress, Australian women are still at least 12 years away from achieving financial equality, Financy’s March 2019 Women’s Index found. 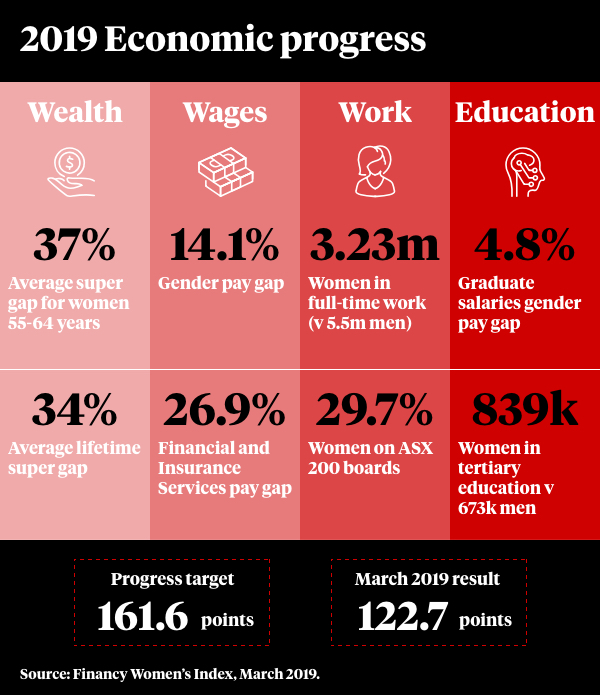 “We still have too many Australian women unable to realise their economic potential,” Financy Women’s Index founder Bianca Hartge-Hazelman.

“Surprisingly, in a time of rising employment, there are women who are still underpaid and underemployment is worse than a decade ago,” she said.

“Employers and policy makers need to do more to support women in addressing the many challenges that continue to hold back financial progress.”

The Australian Bureau of Statistics pegs the gender pay gap at 14.1 per cent, a figure researchers say is deceptively low.

Governments “need to be honest about the fact that it’s actually a significant gap”.

“I can understand why agencies would want to use the ABS data, but the problem is it uses base salary only, not full remuneration. In terms of full remuneration the pay gap is around 21 per cent, and that’s a lot more concerning,” Dr Fitzsimmons said.

“We are not doing well as a country, and that means we lose as a country. Women lose most, but evidence shows that women’s workforce participation is a win-win, not only for individuals but also for the economy.”

Women in work: Australia at least a dozen years short of gender equality