Twelve major Australian companies are being targeted over greenhouse emissions by a coterie of global investors who speak for $US32 trillion ($A45.11 trillion) and have already won a fight with the world’s largest commodity trader, Glencore.

Glencore on Thursday announced it would cap its coal production at 2019 levels, despite spending $US3.5 billion ($4.92 billion) on coal expansion in recent years. The move came after it locked horns with Climate Action 100+, the outfit fighting the greenhouse battles of more than 300 global investors.

Now Climate Action 100+ is hunting more big corporate game, including some of the biggest household names in Australia, in pursuit of its emissions reductions ambitions. Here is the Australian list. 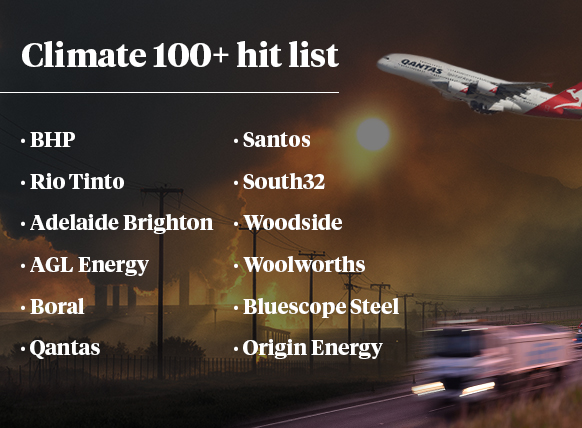 Emma Herd, CEO of Investor Group on Climate Change, which sits behind CA 100+, said the group was a year into a five-year program to pressure major companies into reducing emissions and dealing with climate risk through investor engagement.

Involvement is not mandatory but “it would be a brave company that said ‘no’ to more than 300 investors speaking for $US32 trillion,” Ms Herd said.

Big hitters on both sides of the negotiation

The financial clout of the investor group is pitched against some of the world’s biggest emitters whose actions “account for two-thirds of global industrial emissions”, said Suzanne Harter, campaigner with the Australian Conservation Foundation.

Of the list above, BHP and Rio Tinto are in the top 100 and a further 10 are in an extra 60 companies added to the list by regional investment bodies, which in Australia’s case, is led by Australian Super.

The approach of Climate 100+ is to negotiate a realistic outcome with target companies based on what they can achieve.

“We want to develop a shared understanding,” Ms Herd said. “We’re not looking for a fight – we’re looking for an outcome.”

Australia’s second-largest company, BHP, is on CA 100+’s list, but a spokesman told The New Daily that “we engage with a bunch of organisations around ESG [environment, social and governance]”, without specifically admitting CA100+ was one of them. However, he said “thermal coal is now less than 3 per cent of our business”.

Not all the companies on the list mine or burn fossil fuels. Woolworths met with CA100+ in mid 2018, apparently over issues relating to emissions in its supply chain. like food growing, processing and delivery.

“We’ve had no further correspondence since this time … Woolworths has undertaken modelling to understand the impacts of a two-degree [Celsius] world on our emissions trajectory,” a spokesman said.

Energy group Origin told The New Daily that the the company had agreed in December 2017 to abide by the Paris Climate Change Accords.

“This commitment includes halving our direct carbon emissions by 2032,” a spokesman said.

CA100+’s success with Glencore was regarded as significant because the company had spent up big on expanding coal production. Agreeing to a cap meant it was not going to fully exploit that potential.

Not aiming to close business down

“We’re looking for short-, medium- and long-term reduction targets in line with Paris. We’re not saying to companies ‘you should turn off half your business’.”

Andrew Gay, Australian Super’s investment governance manager, said CA100+ aims to set “clear goals that are reasonable asks of the companies in which we invest and are consistent with the way long-term investors seek to manage climate change within an investment portfolio to improve investment returns.”