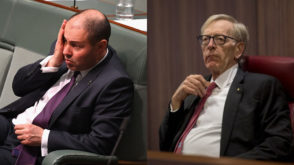 Last week Josh Frydenberg “guaranteed” the royal commission’s final report would not leak while the government sat on it for three days.

About $22 million says that guarantee wasn’t worth anything.

The welter of news in Kenneth Hayne’s report has tended to overshadow what appears to be some rather obvious insider trading.

Someone, somewhere, somehow received a nod and wink on Monday morning that the banks would actually come out of the royal commission better than expected.

“Front running” is the market euphemism for what happened next.

“Any alternate explanation is fanciful,” a fund manager wrote to me.

“With the banks down a quarter per cent, some trader looked out the window at 11am and noticed it was all sunny and cheerful and decided to buy a half billion dollars worth of the major banks ahead of the report into their own malfeasance. I don’t think so.”

That half-billion plunge at 11am was worth a quick $22 million profit on Tuesday morning.

Interestingly, AMP was not part of the 11am action. AMP shares didn’t get their sudden ramp up until 3.15 pm.

It appears the leak that the banks would be fine didn’t initially extend to AMP. The necessary nod there was that vertical integration of wealth management would be allowed to continue, against most observers’ expectations – and certainly mine.

The preservation of vertical integration – allowing an institution to own financial advisers, the investment platform they use and provide products for them to sell – seemed to me to be dead for all money.

It looked like three of the four big banks thought so too, as they sold out of the adviser business, leaving only Westpac and AMP as the two sticklers for the old structure that itself played a major role in creating the royal commission.

The outrageous “shadow shopping” of AMP by ASIC demonstrated the obvious outcome of vertical integration a dozen years ago – and nothing was done about it. ASIC chiefs, AMP CEOs and chairmen all happily came and went without changing the system – until the royal commission put a rocket up ASIC and AMP.

After the subsequent AMP board clean-out, the company appointed former CBA CEO David Murray as its new chairman. Mr Murray built the Commonwealth Bank’s vertically integrated wealth management business. Unsurprisingly, he remains an unrepentant fan of the structure despite all that has unfolded.

In the financial system inquiry that Mr Murray chaired, the problems of vertical integration were canvassed in the interim report, but disappeared from the final.

In the end, the royal commission brought the argument that it would be too “disruptive” to ban vertical integration – despite the acknowledged conflicts.

So who knew what was in that final report? On Monday night’s 7.30 Report, Leigh Sales asked Treasurer Josh Frydenberg a question related to the trading.

LEIGH SALES: Around 11 this morning bank shares across the board rose about 1 per cent and they closed at around that level, too. Did the banks get a briefing this morning on what the report contained, so they knew what to expect?

JOSH FRYDENBERG: Absolutely not. There was a lock-up and there were security guards around Parliament House. There was obviously Treasury officials and it was very, very closely monitored. The only people who were allowed into the lock-up were stakeholders and, when it came to the banking industry, it was by their representative body and, of course, senior journalists, including from our ABC.

The question only covered one aspect of the apparent leak, that the banks weren’t specifically briefed. He was not asked if he thought it had leaked or what action he would take to try to discover who leaked and how.

Plenty of people in the government knew the banks and AMP were escaping relatively lightly. The recommendation to whack mortgage brokers, in particular, will be worth hundreds of millions of dollars to the banks if it is implemented.

So who wants to start a class action about the value of Treasurer Frydenberg’s guarantee?