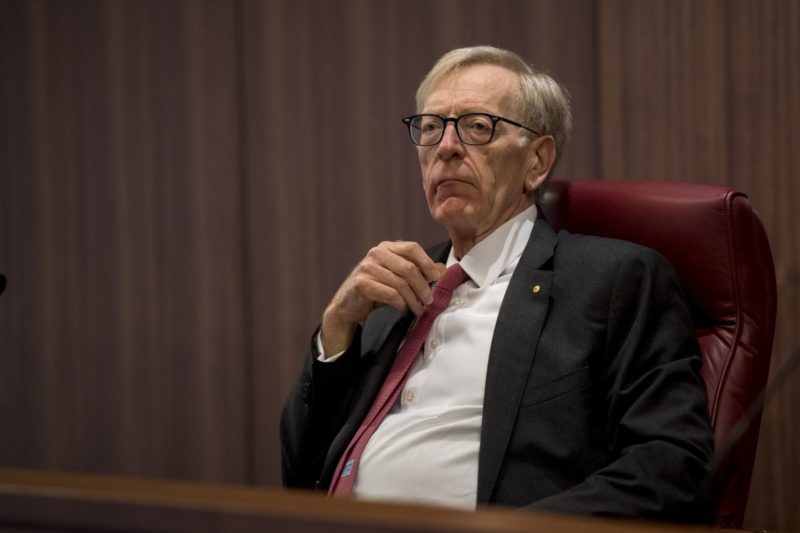 Australia’s big banks and financial institutions have broken the law and put profits before people, according to the final report of the banking system that warns “saying sorry and promising not to do it again” will not prevent history from being repeated.

The damning final report of the royal commission into the banking sector has made 24 referrals for misconduct involving potential civil and criminal penalties for big names including the Commonwealth Bank, NAB, AMP and ANZ. Only Westpac escapes Commissioner Kenneth Hayne’s calls for referrals over the breaches.

In some cases, criminal charges could result in jail time for banking executives involved in scandals exposed in the report. It will be up to the regulators to determine the next steps.

The landmark report is also set to spark an immediate shake up of Australia’s mortgage broking industry by banning trailing commissions and ensure brokers’ responsibility is to the home owner, not the bank.

The Morrison government has vowed to “take action” on all 76 recommendations confirming the establishment of a new compensation scheme of last resort to award compensation.

“As we have heard, too often the conduct within our financial institutions has been in breach of existing laws and fallen well below community expectations,’’ Treasurer Josh Frydenberg said.

The price paid by our community has been immense and goes well beyond just the financial. Businesses have been broken, and the emotional stress and personal pain has broken lives.

“As Commissioner Hayne has made clear: There can be no doubt the primary responsibility for misconduct in the financial services industry lies with the entities concerned and those who managed and controlled those entities.”

There’ll also be a host of changes to the new Australian Financial Complaints Authority (AFCA) and taxpayers will be asked to fund $30 million in compensation for individuals who had unpaid determinations in their favour by predecessor bodies of the new group.

On executive salaries, the report calls for regulators to pay far greater attention to whether remuneration structures are encouraging staff to break the rules. It also recommends making allowances for the clawback of bonuses and share offers in the event of misconduct.

The Commissioner’s final report also finds that where banks and financial institutions have broken existing laws, regulators have failed to prosecute.

“Too often, financial services entities that broke the law were not properly held to account.”

The new measures announced by the Morrison government on Tuesday include:

Mr Frydenberg confirmed that the government would act to expand the jurisdiction of the Federal Court to cover corporate criminal misconduct to expedite the consideration of cases brought by regulators.

The final report contains more than 20 referrals, with the Morrison government noting that increased funding may be required in the 2019-20 budget.

“My message to the financial sector is that the misconduct must end and the interests of the consumers must now come first. From today the sector must change, and change forever,” Mr Frydenberg said.

Commissioner Hayne’s final report states that what stands out from the evidence was the importance of four observations: “The connection between conduct and reward; the asymmetry of power and information between financial services entities and their customers; the effects of conflicts between duty and interest.

But Commissioner Hayne finds that blurred lines between frontline consumer services, sales teams and financial advisers was a significant factor.

“Rewarding misconduct is wrong. Yet incentive, bonus and commission schemes throughout the financial services industry have measured sales and profit, not compliance with the law and proper standards,’’ the report states.