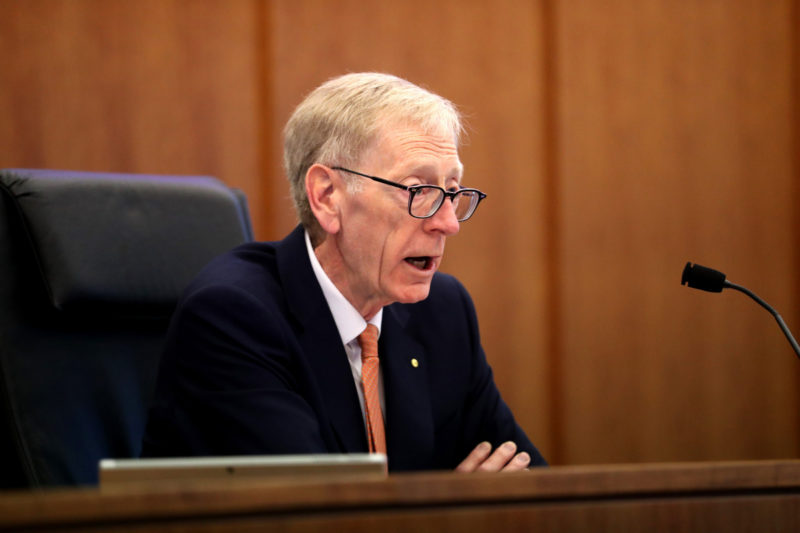 Commissioner Hayne has issued his final word on the banking industry. Photo:AAP

The biggest game in town on Monday afternoon will be the release of Commissioner Kenneth Hayne’s final report into misconduct in the banking and financial services sector, following a scandalous 12 months of inquiry.

The royal commission was announced in December 2017 after then prime minister Malcolm Turnbull backflipped on 18 months of stonewalling calls from politicians and the public alike, triggered by shocking media reports of ripoffs and unconscionable behaviour by banks placing profits ahead of customers’ rights.

Commissioner Hayne led inquiries into seven aspects of the banking and finance industry, including consumer and home lending, business loans, superannuation, insurance and the treatment of Indigenous communities.

The banks’ pain could yet be extended, with bonuses and commissions threatened by Commissioner Hayne’s report, along with criminal charges for individuals and companies.

Here are some of the other touchstone areas to look for when the report is made public.

The property boom that drove bank profits for a decade saw shocking rorts perpetrated on everyday Australians. The commissioner will pass judgement on the actions of mortgage brokers who forged customers’ signatures on loan documents, banks who lent more money than people could reasonably be expected to pay back, and lending criteria that systematically under-reported borrowers’ expenses.

Credit card customers were routinely sold loan insurance they could not claim on and home loan insurance that was also unusable. Fraudulent actions by mortgage brokers were tolerated rather than being reported to authorities. Commissions were paid to people like tailors and gym owners to rope in mortgage customers.

Names to look out for in this space include CBA, ANZ, Aussie Home Loans and NAB. Westpac was identified as the worst when it came to disobeying regulators on credit card limits.

The commission unearthed some shocking ripoffs, with AMP losing its chair and CEO over its constant misleading of regulators about charging fees for no service. Its executives could face jail or big fines as a result.

Even the dead were charged fees for advice on their accounts by CBA and advisers. Others were found to have directed clients’ money into assets they secretly owned or used clients’ cash for their own asset purchases. Westpac advised a couple to sell their home and buy a bed and breakfast they ultimately couldn’t afford.

Celebrity adviser Sam Henderson gave superannuation advice to a client that could have cost her $500,000 and the head of advice firm Dover, Terry McMaster, collapsed in the chair while explaining why he took on advisers with sullied reputations.

The dreams and livelihoods of entrepreneurial Australians were shattered with high handed and deceptive conduct by a range of banks. Repayments were doubled unilaterally, valuations changed without consultations leading to forced sales at a loss and bankers advised customers to buy properties in which they held an undisclosed interest.

Farmers felt the brunt of banking misconduct with families given one day to leave a 100 year old farm and banks using false valuations to force farmers to sell up their properties.

Customers from remote Aboriginal communities were unable to get access to low-fee accounts they needed and Aboriginal people were pressured to buy funeral insurance they didn’t need or want. The private and non-Indigenous Aboriginal Community Benefit Fund ignored court orders that it make its ownership clear and its CEO had no qualifications to support his role.

Indigenous car buyers were charged as much as 48 per cent interest on car loans.

Banks retained grandfathered commissions on superannuation accounts that were not in the best interests of clients and NAB may face 110 charges over the issue. Fee for no service penalties may cost financial houses as much as $850 million in penalties.

CBA broke the law 15,000 times on super fees and IOOF kept unfair payments to investors a secret. Both the government and opposition are waiting on the super recommendations before finalising policies.

Insurers allowed telemarketers to break the law and Comminsure ignored legal advice that it should pay out claimants. ClearView could face as many as 303,000 charges over high-pressure sales tactics.