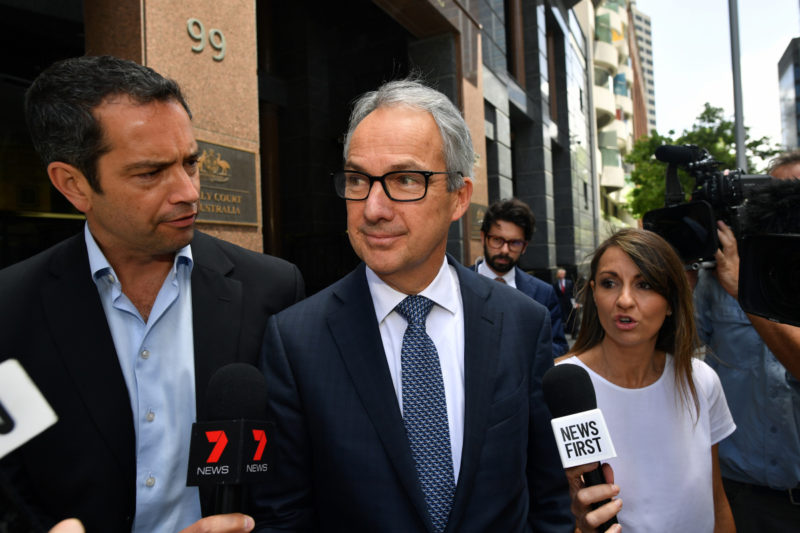 Macquarie has no limit on bonuses, says Nicholas Moore. Photo:AAP

Bonuses paid to senior management at Macquarie Group, the so-called “millionaires factory”, have no upper limit, the financial services royal commission has heard.

Macquarie CEO Nicholas Moore told the commission on Friday that the bank’s remuneration arrangements were “unique”, with the variable component of salaries based on overall profitability rather than revenue.

Mr Hodge told the commission the bank was effectively using a method that could be described as “intuitive synthesis” to work out bonus levels.

Commissioner Kenneth Hayne observed that that term originated from criminal law, where it was used to determine “how sentences for crimes are fixed”.

“Thank you, Commissioner. I was impressed with the phrase. I didn’t know where it came from,” Mr Moore said.

Mr Moore said variable remuneration levels were tied to the Macquarie Group’s long-term performance and not worked out simply on one year’s profits.

“The idea of profit share is more powerful than bonuses,” he said.

“A deferral, I think, is very important … as we know, decisions being made today have consequences over many years.”

Mr Hodge also raised the contentious issue of mortgage brokers with Mr Moore. Previous submissions to the commission have revealed that mortgage brokers tend to load clients up with debt and loans sourced through them take longer to pay off than those that come directly from a bank.

Brokers who source loans through the Commonwealth Bank could earn as much as $2.4 million a year. Changing how brokers were paid – from a percentage of a loan to flat fees – has been raised as a way of reining in the industry.

Mr Moore told the commission that Macquarie relied on mortgage brokers because it did not have an extensive branch system, as conventional banks did.

Our nervousness would be that regulation could severely hamper that.”

Mr Moore said he thought the broker system was beneficial, and he opposed its removal. Mr Hodge asked about the likely effect of scrapping commissions and charging only fees for service.

“It doesn’t sound as attractive as the current structure,” Mr Moore replied.

That triggered Commissioner Hayne to chip in, asking “attractive to whom?”.

Mr Moore’s answer was vague. He implied that it would be less attractive to customers but did not explain how that might be.

Mr Moore said compliance with regulation had been greatly improved after Macquarie was forced to give ASIC an enforceable undertaking in 2012.

Royal commission: ‘No upper limit’ to bonuses for Macquarie bosses