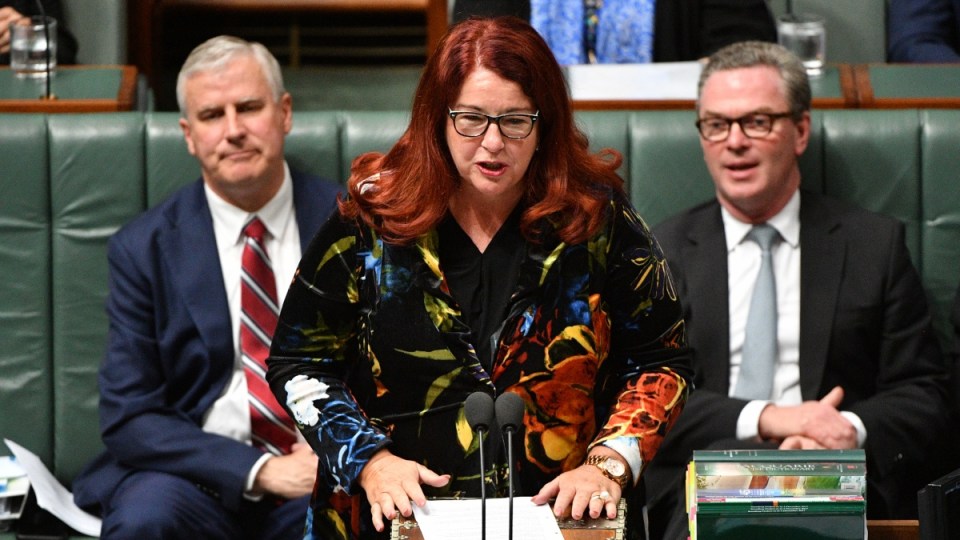 Environment Minister Melissa Price has a new answer to the question of emissions. Photo: AAP

After days of evasion and apparent deception, and faced with the charge that it was lying to the Australian people, the federal government has attempted to justify its claim that it is on track to meet its emissions targets – claiming it can simply “scale up” existing policies.

But the justification left a huge amount unexplained, and has been dismissed by one expert as “nonsense”.

In recent weeks The New Daily and other media outlets have repeatedly called out Prime Minister Scott Morrison and his energy and environment ministers for falsely claiming Australia is on track to meet its Paris targets.

Mr Morrison’s insistence that the 2030 target of 26 to 28 per cent below 2005 levels will be met “in a canter” contradicts the Department of the Environment and Energy’s projections, which finds the targets will be missed by a huge margin.

Both the Prime Minister and the Energy Minister ignored repeated requests for an explanation. But on Tuesday a spokesperson for Environment Minister Melissa Price finally gave The New Daily an answer, claiming the targets could be met because existing policies could be “scaled up” if needed.

This is what Ms Price told The New Daily: “Our government’s policies are scalable and position us well to meet the 2030 target.

“The government’s 2017 Review of Climate Change Policies said we have the right mix of policies, but need to review and refine them over time. This is what a mature and responsible government does.

“We take international commitments very seriously, and will meet our Paris target.”

The comments followed an interview on ABC radio in which the minister said she was “very comfortable we’re going to meet the 2030 target”, but failed to give any details.

The context of the interview was a damning report from the United Nations’ Intergovernmental Panel on Climate Change, which found the Earth was warming more quickly than expected, and outlined the likely effects of this warming on the planet.

The report made it clear governments must act urgently if the devastating effects are to be mitigated, but Ms Price brushed the report’s findings aside.

According to Ms Price, the government has five key means of reducing carbon emissions: the Emissions Reduction Fund, the Clean Energy Finance Corporation, ARENA (Australian Renewable Energy Agency), Snowy Hydro 2, and a reforestation plan to plant one billion trees. She claims these could be ramped up to meet the 26 to 28 per cent reduction target.

By far the biggest policy is the Emissions Reduction Fund, or ERF.

This is a $2.55 billion fund that has been spent on so-called ‘carbon farming’ emissions-reduction projects – mostly by planting trees and otherwise increasing vegetation that absorbs CO2.

More than 90 per cent of that $2.55 billion has now been spent, and the government estimates the whole project will result in total emissions reductions of 191 million tonnes of carbon and other greenhouse gases over an unspecified period of time.

That would assume many more carbon farming projects could be found.

But according to Hugh Saddler, a climate change and energy expert and associate professor at the Australian National University, even if the government were willing to spend that extra $9 billion – which it has given no indication it is – it likely would not have the desired effect.

He called the ERF a “stupid policy”, and dismissed Ms Price’s claim ramping it up would result in Australia’s Paris targets being met.

“It’s nonsense, because the ERF is doing nothing at the moment and it’s a very expensive way of achieving emissions reductions if it did work.

“The [191 million tonnes] is spread out over many, many years into the future. Now, the projects are meant to be up and going already, you should see some effect of them now because a number were contracted two or three years ago.

“But the sectors where most of the contracts have gone, the emissions are actually going up.”

Professor Saddler said if the government was serious, it would do a number of things: Promote rather than obstruct investment in renewable electricity generation; Promote a transition to electric vehicles (he pointed out that one of the highest-emitting sectors was diesel fumes from trucks); and Encourage a shift away from domestic use of gas and towards electricity.

As for the other four methods, Professor Saddler said three – the Clean Energy Finance Corporation, ARENA, and Snowy Hydro 2 – were not emissions-reduction policies at all, while reforestation was a very slow method of reducing emissions.

He also pointed out that land clearing in Queensland and New South Wales neutralised tree planting.