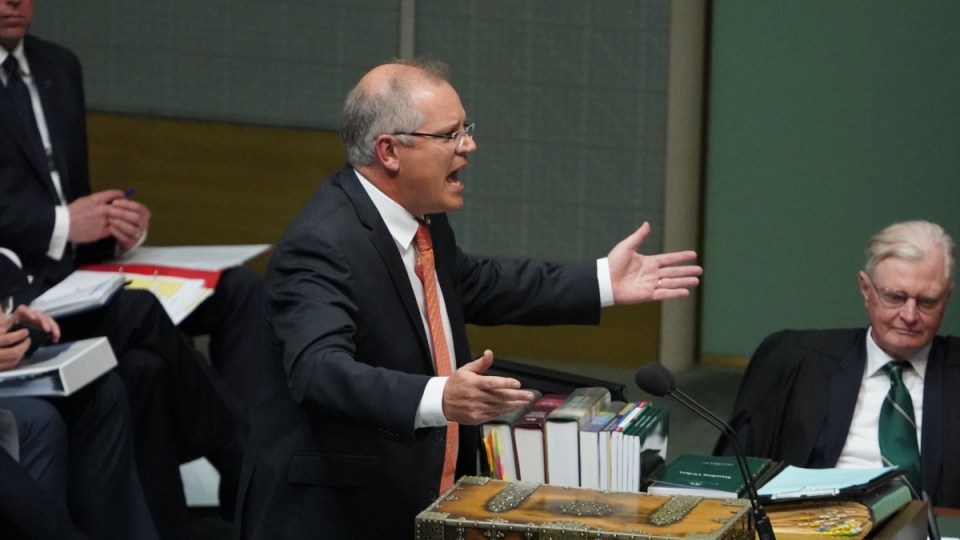 Scott Morrison's claim Australia will meet its Paris targets 'in a canter' is not borne out by the facts. Photo: Getty
analysis

Prime Minister Scott Morrison says Australia is on track to meet its 2030 emissions reduction target “in a canter”. But it’s not, and Mr Morrison is either being blindly optimistic or he is an outright liar.

That’s a big claim, so allow the facts to tell the story.

To meet the Paris target, by 2030 Australia must reduce its overall greenhouse gas emissions by 26 per cent at the very least on 2005 levels.

The government could not be clearer about this commitment. It sets it out in black and white here.

So, are we on track to meet this? According to the very same government department, the Department of the Environment and Energy, we are not. And not by a long way.

Let’s just dwell on that for a moment. The government’s own environment and energy department projects that Australia’s total greenhouse gas emissions will be 5 per cent below 2005 levels by 2030.

But don’t take The New Daily’s word for it. Go to page 11 of this report and read it for yourself. It’s about two-thirds of the way down, under the heading “Emissions to 2030”.

If you don’t have time, here’s a screen shot of the relevant section from the document:

PRIME MINISTER: So people choose and pick their figures to make their political arguments. We’re going to meet those in a canter, our 26 per cent target …

CASSIDY: You do think you’ll meet it in a canter?

PRIME MINISTER: I do, Barrie, I do.

How does Mr Morrison justify this wild optimism?

The New Daily put all this to the Prime Minister’s Office, and asked Mr Morrison to answer the charge that he was lying to voters. No response was received by deadline.

So we can only speculate. One possible answer might be that the projections quoted above are 10 months old, and perhaps newer projections show a radically rosier picture.

But that does not appear to be the case. The latest greenhouse gas emissions figures, released last Friday, do not contain any long-term projections – we’ll have to wait till the end of the year for those.

What they do show, however, is that overall emissions rose by 0.3 per cent in the three months to March 2018, and were generally in line with the December projections.

In the year to March 2018, Australia’s greenhouse gas emissions were 11.2 per cent below 2005 levels. If they continue to rise, as the department predicts they will, that 11.2 per cent margin, instead of widening to 26 or 28 per cent, will have slimmed down to 5 per cent by 2030.

So are there any grounds at all for Mr Morrison’s claims?

The only thing in the ABC interview that comes close to a justification is the following comment: “[T]he investments that are continuing to be made in renewables on the basis of the fact that increasingly, we’ve hit the threshold point, where the investments make sense, increasingly, without subsidies.”

So what Mr Morrison is saying is that the private sector, without any new government subsidies or incentives, will oblige the government by massively investing in renewable energy to the point that the entire nation’s emissions, which are currently rising, will perform a screeching U-turn, and within the space of 12 years reduce by 26 to 28 per cent on 2005 levels.

Mr Morrison’s claim that “none of us are Nostradamus on this” may be true, but there is no evidence at all that the private sector will provide the necessary investment.

In fact, while the Renewable Energy Target has created an investment boom in renewable energy, it is due to expire in 2020, at which point investment is likely to fall dramatically.

The COAG Energy Council – a joint organisation of Australia’s federal and state governments – predicted in August that “without a specific policy commitment to achieve emissions reductions in the NEM [National Energy Market], it is expected that cumulative emissions over the decade will not reduce enough for the NEM to meet its share of the national target” (see page 17 of this report).

Bloomberg National Energy Finance Australian head Kobad Bhavnagri painted an even grimmer picture, telling the ABC in January this year that without a new policy to replace the RET, investment in renewables would “likely fall off a cliff”.

But even in the event that, rather than falling off a cliff, investment in renewables ramped up, this would only reduce emissions from electricity generation.

As The New Daily recently explained, electricity generation only accounts for about a third of Australia’s greenhouse gas emissions.

Emissions from a number of other sectors, most notably transport and agriculture, are rising, and on track to shoot through the roof by 2030. And the federal government has no plan at all to address them either.

Scott Morrison is either lying about carbon emissions, or just plain ignorant