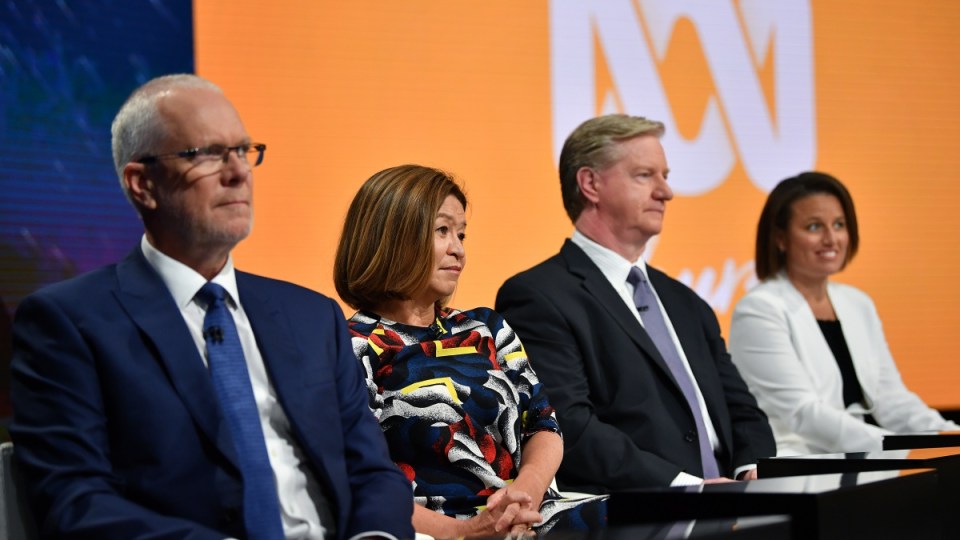 Each week almost 70 per cent of Australians tune in or log on to the ABC, but the shock removal of managing director Michelle Guthrie this week begs the question: Who’s really running our national broadcaster?

After Ms Guthrie’s abrupt sacking from her role, The New Daily decided to dig in and see who’s who on the ABC’s seven-member board, and how they came to be in charge of one of the country’s biggest media outlets.

Mr Milne’s career includes senior roles with a number of telecommunications companies, most notably as managing director of Telstra. More recently, Mr Milne has been appointed to several board positions with numerous businesses, including accounting software company MYOB as well as ME bank, owned by industry super funds.

He’s thought to be the one who pulled the trigger on Ms Guthrie’s sacking, after months of tension and multiple disagreements between the pair escalated to breaking point. Mr Milne joined the board on April 1, 2017 and his term ends on March 31, 2022. Like all the current board members, he was appointed by a Coalition government.

Mr Lewis has been on the board since October 2014 and also chairs the ABC’s audit and risk committee – a role he’ll likely be right at home in given his previous tenure as chief financial officer of the Seven Network. Mr Lewis joined the board on October 2, 2014 and his term ends on  October 1, 2019.

While not related to the ousted managing director of the same name, mining lobbyist Dr Guthrie has similarly faced criticism over her involvement on the ABC board. Dr Guthrie was appointed to the board in February last year by then prime minister Malcolm Turnbull, despite not appearing on the list of recommended candidates put to government by the independent panel tasked with nominating potential ABC board members (more on that later).

Dr Guthrie still holds her role as chair of mining lobby group Minerals Council of Australia in addition to her role with the ABC. Dr Guthrie joined the board on February 23, 2017 and her term ends on February 22, 2022.

Since starting her professional life as an officer with the Royal Australian Air Force, Dr Ferguson has gone on to work in a range of fields, including heading up a global mining and resources consultancy and working as an adjunct professor at the Queensland University of Technology. Dr Ferguson joined the board on November 12, 2015 and her term ends on November 11, 2020.

Ms Walford is the managing director of consultancy firm DW Bottomline Transition Strategists, which she also founded, and has served on the boards of Australian Dance Theatre, Australian Women Chamber of Commerce, and financial services business Australian Associated Advisers. Ms Walford joined the board on November 24, 2015 and her term ends on November 23, 2020.

Mr Gersh founded Gersh Investment Partners, an investment bank aimed at developers and construction companies. He also sits on the board of New South Wales-based current affairs forum The Sydney Institute. Mr Gersh joined the board on May 11, 2018 and his term ends on May 10, 2023.

Ms Connors has worked for the ABC for more than two decades, with roles ranging from executive producer of the broadcaster’s social history unit, manager of Radio National, head of editorial quality and governance for radio, and more. Ms Connors joined the board on May 1, 2018 and her term ends April 30, 2023.

General President elect for AgForce Queensland Farmers, Ms Somerset is a rural industry leader and strategist with board experience across the not-for-profit, government and industry sectors. This includes as a director of the Royal Flying Doctor Service (Queensland section) and as chair of the Red Earth Community Foundation, South Burnett. Ms Somerset joined the board on February 23, 2017 and her term ends on February 22, 2022.

On the face of it, the appointment of board members looks highly political.

Board members are selected by the Minister for Communications – currently Mitch Fifield – with the prime minister also brought in when it comes to selecting a chair. But the process isn’t as straightforward as the communications minister naming someone they think is up to the task.

Instead, the minister is provided with a shortlist of candidates by an independent nominations panel managed by the Department of Prime Minister and Cabinet, and typically choose one of these to fill the vacancy.

If the minister or prime minister isn’t happy with the independent board’s picks, they can choose to nominate someone else (as long as they provide their reasons for why their pick is a better candidate).

This was the case with mining lobbyist Dr Vanessa Guthrie in February last year.

In these cases, the minister has to explain in writing why they think their outsider pick is the best one for the job. This has to be signed off by the prime minister, and then table their reasoning in Parliament within 15 days of the appointment.

Members of the nomination panel that creates the shortlist are themselves appointed by the secretary of the Department of Prime Minister and Cabinet, and can’t serve for longer than three years in the role.

It all seems terribly political, but University of Technology Sydney adjunct professor of journalism Peter Manning, a former ABC executive, said this system for appointing board members or even the managing director isn’t a worry.

Where problems arise with board members, Mr Manning said it’s more likely to be an issue with the candidates rather than the system that picked them.

In fact, Mr Manning suspects Ms Guthrie’s dramatic exit from the broadcaster was simply the consequence of being the wrong person for the job, rather than a politically motivated power play or problem with the appointment process.

“I think it was a mistake – that Ms Guthrie too probably regrets – that she was chosen [as managing director],” Mr Manning said.

“She wasn’t ready for the size of the changes that were needed, for the political hostility that faced her, for the funding cuts or the jobs that would have to go with them.”

Regardless, Mr Manning was concerned to see Ms Guthrie go midway through her term, especially given the high rate of turnover Australians have endured with their prime ministers in the past decade.

“It disturbs me that someone had only half the contracted time to do their job before we assessed whether or not they’re a failure,” he said.

“I hope this isn’t the start of a new era of quick turnovers.”