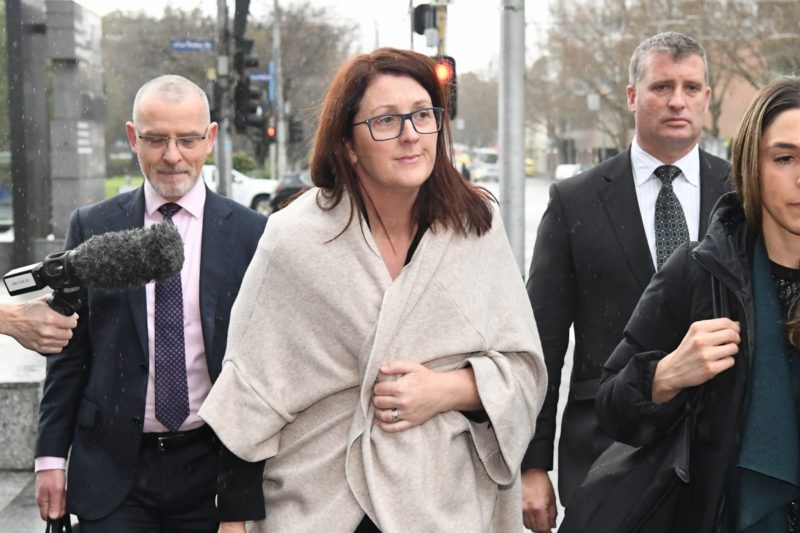 NAB's Nicole Smith spent over a day in the witness box at the royal commission. Photo:AAP

NAB may face a further legal onslaught from ASIC, with documents produced in the financial services royal commission showing the regulator was investigating 10 NAB subsidiaries over possible legal breaches.

The document, entitled Outline of Suspected Offending by the NAB Group was dated October 2017 and was labelled Without Prejudice and Confidential. That label means it was part of negotiations between NAB and the regulator about potential breaches and how they may be dealt with.

The hearing got heated when NAB counsel Neil Young QC objected to sections, not released to the commission, being made public.

Mr Young tried to get NAB witness Nicole Smith released from further appearance on the grounds she would not have information about the issues in the document.

“The documents in question are documents that Ms Smith had no involvement in and was not a party to,” Mr Young said.

“On our instructions her answer will be that she had no involvement.”

Commissioner Kenneth Hayne took exception to that, pointing and saying emphatically: “You will not give her her answer, Mr Young. You will not.”

“I’m not attempting to give any answer, Commissioner,” he replied.

Undeterred, the Commissioner continued: “You will not indicate what answer you think she may give.”

“I’ve done nothing of the sort, Commissioner,” Mr Young said.

A composed Commissioner then said: “Do go on.”

Discussion on the point will continue on Thursday morning.

The document in question was produced for a meeting with NAB management and “outlines the concerns of the Australian Securities and Investments Commission” over the alleged charging of fees to super fund members without any services being provided.

ASIC’s document notes that ‘fee for no service’ issues had been expected to be resolved following the introduction of new laws in 2014. But this was apparently not the case and “ASIC is concerned by NAB and its group licensees’ apparent failure to appreciate the extent and seriousness of this issue despite being on notice since at least 2010”.

Examples of complaints about NAB behaviour included the following: “Client’s son has raised concerns regarding an ongoing service fee of 1.1 per cent on the client’s account for the past 15 years without ongoing service provided to the clients.”

The release of the ASIC document comes after NAB had already remediated or agreed to remediate $108 million worth of breaches over ‘fees for no service’. Given ASIC labelled the document ‘Suspected Offending’, the bank could face further remediation costs.

Earlier, counsel assisting the commission, Michael Hodge QC, put to Ms Smith that NAB’s superannuation businesses faced a conflict of interest between profits to shareholders and returns to fund members.

“And did it strike you, looking at this, that, again, there’s a conflict of interest here, which is that … somebody from the NAB Wealth Group needs to come to you and say, ‘We want to give up some of our profit in order to improve the performance of the members’ investment’?” Mr Hodge asked.

“So yes, there’s a tension in the conflict of interests of running a fiduciary business for profit as part of, you know, a conglomerate organisation,” Ms Smith replied.

But that conflict was resolved through interaction between the relevant parties, she said.

Ms Smith could not say what percentage of returns NAB’s trustee company paid to the NAB group but said it was between $100 million and $200 million, “closer to $100 million than $200 million”.

‘You will not’: Royal commission gets heated as NAB scandal deepens