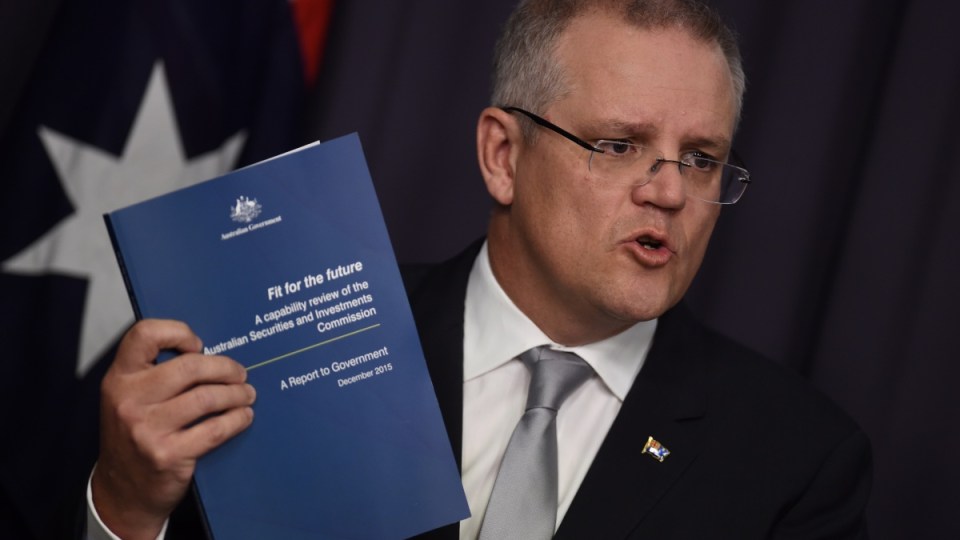 Here’s the core question about the Banking Code of Practice: after all that has been disclosed about bank ethics, dopey boards and dubious executive behaviour when chasing a dollar, who would trust the banks to self-regulate?

The answer is: The Australian Securities and Investments Commission, ASIC.

A secondary question arises: After all that’s been disclosed about ASIC’s incompetence, uselessness, ability to be asleep at the wheel, inability to deliver justice in cases of outrageous fraud and general hapless record as a gormless watchpuppy – correction, watchguppy – who would trust it with oversight of the banks regulating themselves?

And the answer to that is: Nobody in their right mind, but the federal government has.

Remember that when the government was desperately trying to avoid establishing a royal commission in 2016, it claimed to be empowering the “tough cop on the beat” with an extra $127 million to keep an eye on the finance sector. Yeah, right. If the Royal Commission is doing its job, its final report will be as scathing of ASIC as any of the banks.

How far the “tough cop on the beat” has failed to come is demonstrated by the main achievement of “the code” (as the banks and ASIC want to call it). The big leap forward in bank behaviour will be to extend the protections presently applying to business loans of less than $1 million to loans as big as $3 million.

The recommendation from various parties, including the small business ombudsman and the banks’ own independent expert, was that the “small business” protection be lifted to $5 million. The Australian Bankers’ Association thought that was too much and wanted $3 million. ASIC rolled over and agreed. Such a tough cop.

The joke is that the limit protects those under it from what are freely described as “unfair contract terms”, the “non-monetary default clauses” that allow banks to move the goal posts, change the rules and pull rugs out from under customers pretty much as they please.

For example, the infamous case of the Macksville pub detailed by the Royal Commission. The loan involved was $3.72 million – so under the new code, BankWest could still act like bastards and call the loan to suit itself.

ASIC, that tough cop on the beat, must think there was nothing wrong with what went down in Macksville. I’d be surprised if there is another single soul in this country who agrees.

Opening for day 2 of #FSCSummit2018 @asicmedia Chairman James Shipton – “Now is the time to move from rhetoric to reality when it comes to rebuilding trust”. pic.twitter.com/RtPiUuHIP5

Beyond the $3 million limit, the code sounds like the usual bunch of promises to be nicer. Oh, there will be cooling-off periods for loan guarantors and buying insurance, but it all adds up to trying not to be bastards. Good luck with that, given the sales culture that has overtaken our banks as bonuses up the line depend on whatever it takes down below.

Quite simply, what we know about our banks, their boards and management means they should not be trusted to self-regulate. Clean up your act, prove you can change for the better and it might be considered a few years down the track. But right now, it’s rather obscene.

And I write this as one who actually thinks our bank bashing has gone too far, that too many people and their lawyers want to blame banks for their own mistakes.

For example, the marvellous Adele Ferguson headlined a major feature in the weekend Fairfax newspapers about the way Bendigo and Adelaide Bank is dealing with victims of the Great Southern swindle, demanding they repay their loans.

I have plenty of sympathy for people who were badly advised by dodgy individuals being paid especially fat commission to flog a ponzi scheme, but Bendigo did not make them borrow money to invest in the fraud.

It’s a bit rich for the victims to now think Bendigo shareholders should pick up the tab for their most unfortunate mistake and the misdeeds of the perpetrators.

Some of the victims were taken for another ride by a dubious class action that resulted in fortune for the ambulance chasers and bugger-all for the victims. In the process, the victims were badly advised to stop servicing their loans, resulting in penalty interest and making a bad situation worse.

There are aspects of Bendigo’s behaviour that are wrong – the penalty interest in particular which I will deal with at another time – but the Great Southern disaster was not Bendigo’s fault.

Those who were responsible, who ran the scheme and profited from it, have escaped with a bare wrist slap. Yes, that’s ASIC.

An analogy: Suppose there’s a flaky Australian entrepreneur claiming he’s building a world-beating car that somehow fiddles the system to offer tax advantages. The entrepreneur pays a range of incompetent-to-dodgy salespeople above-the-odds commission to flog the things, even hires some motoring “experts” to say nice things about the cars.

Suppose you like story the salesperson spins, take out a loan and buy one of the cars. It turns out the car is a total lemon. It simply doesn’t go. It’s worthless.

You’re not happy with the salesperson or the manufacturer, but they both close up shop and can’t be touched. The bank you borrowed money from still wants to be repaid, so you start claiming it’s all the bank’s fault and go looking for mistakes in the paperwork that might let you off the hook.

Will the code make a difference? Oh, maybe, at the margin. It won’t do any harm.

The spotlight should mean banks will be more careful about dealing with customers when they get into trouble.

What should happen is that Australia gets a regulator with the ability to kick heads and instil a basic tenet: Be reasonable, be fair, don’t do anything you wouldn’t want to your mother read about in the paper.

And customers have to be prepared to accept the consequences of their own mistakes.

Anything but legislation with Banking Code of Practice