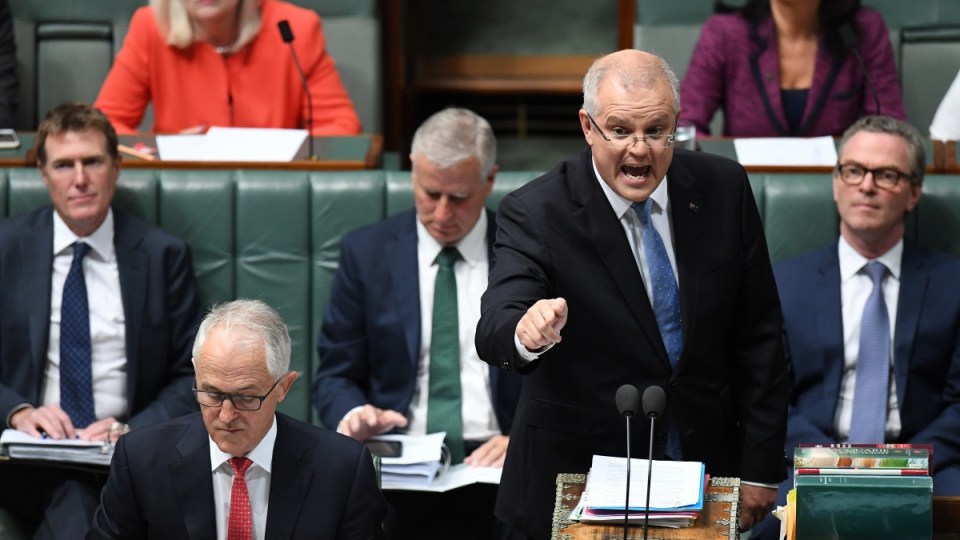 Scott Morrison has promised surpluses, but hasn't said what he'll spend them on. AAP

At long last, after years of budget deficits, it looks like Australia is finally on track for a multibillion dollar budget surplus – a cool $11 billion by 2021, we’re led to believe.

Great news. So what shall we spend all that extra money on?

Mr Aston argued that even to ask such a question betrayed a woeful lack of understanding of how government finances works. Everyone knows surpluses, by definition, go to paying down debt.

The answer is kind of complicated, but it’s worth getting your head around, since both sides of politics are putting so much store in delivering the surplus that has eluded any Australian government for a decade.

First, what is a surplus?

Every financial year the government spends a certain amount of money on health, welfare, pensions, education, infrastructure and all sorts of other things.

It also takes a certain amount in tax revenue, through income and company tax, GST, and so on.

Ideally, the government spends no more than it takes through tax revenue. However, over the last 10 years – starting with the economic shock of the global financial crisis – governments have had to spend more than they have received.

The difference has been funded by borrowing money from global investors through the issuance of government bonds, racking up the national debt in the process.

Now, however, things look like taking a turn in the right direction. Thanks to higher-than-expected tax receipts and better-than-expected economic projections, the first surplus since 2008 is just around the corner.

Treasurer Scott Morrison has promised a surplus of $2.2 billion in 2019-20, a year earlier than expected, followed by an $11 billion surplus the next year, and $16.6 billion the year after that. Labor has made similar promises.

So what does that mean?

Let’s take the $11 billion surplus predicted for 2020-21. On the face of it, it seems like a sensible question to ask what the government will do with that. After all, that’s an extra $11 billion that could be spend on anything, isn’t it? It could go towards new hospitals, or schools, or an increase in the newstart allowance, or to fund more tax cuts.

Well, no. Because, by definition, if the government spent the money, it wouldn’t be a surplus. If every cent of that $11 billion was spent, then the budget would be exactly in balance.

The only way for it to be counted as a surplus is if it goes towards reducing debt. In that sense Mr Aston is right.

However, as economist Stephen Koukoulas pointed out, reducing net debt is not the same as reducing gross debt. And this is where it gets tricky.

The simplest way to reduce debt is simply to use a budget surplus to pay back existing debt. If the debt takes the form of a 10-year Treasury bond, for example, then the government must pay regular interest payments, and at the end of 10 years it must pay back the money it borrowed in full.

When the budget is in deficit, the government has to borrow more money to pay investors their money back – it’s like paying off a credit card bill with a second credit card.

However, when the budget is in surplus, it can use that surplus to pay back investors when their bonds mature, and doesn’t need to rack up any further debt. The result is that its gross debt is reduced.

However, the government can also use the surplus for other purposes, and carry on issuing new bonds (i.e. borrowing more money).

One option is simply to put the money into a term deposit with the Reserve Bank of Australia.

A more appealing, and potentially lucrative, alternative is to invest the surplus in shares, bonds and other assets through some kind of sovereign wealth fund. That’s what John Howard’s Treasurer Peter Costello did with his surpluses – he put them in the Future Fund.

Going back to the $11 billion surplus predicted for 2020. Instead of using that money to pay down its debt, the government could opt to put all of that in a new sovereign wealth fund.

Its gross debt would therefore be identical. However, it would now possess a new asset. And this asset would offset its overall debt, therefore reducing net debt. That would mean that, while the government wasn’t technically paying off any debt, in terms of assets to liabilities it would still be in surplus.

If you got to the end of that, have a carrot.

It’s budget surplus time. Here’s how we can spend the extra billions