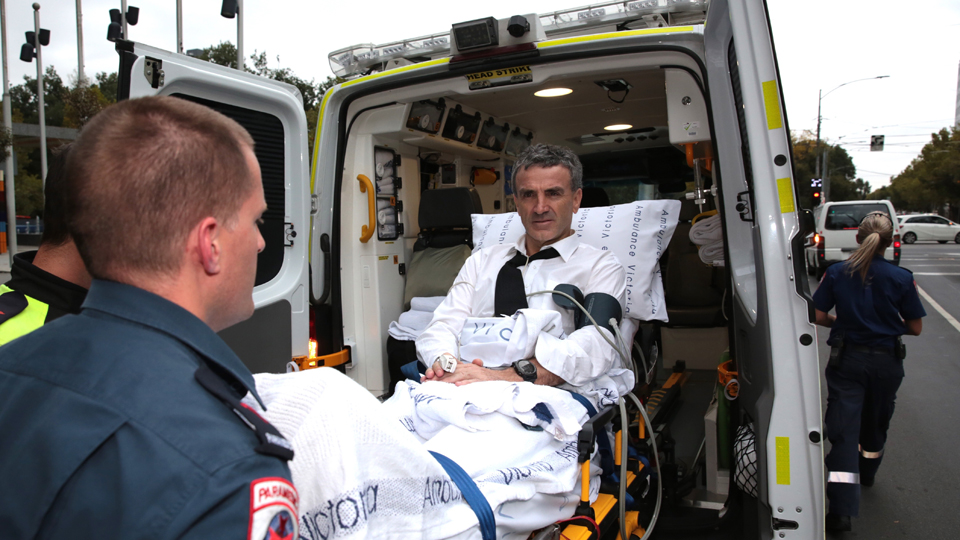 For a split second the hearing room went quiet and the video camera picture became focused on the wall behind where he once sat.

Then Commissioner Kenneth Hayne took charge. Realising what was going on he called attendants to bring first aid as Mr McMaster slumped and he began clearing the court to deal with the emergency.

At one point he called “get out, just get out” to shocked lawyers and the public who began filing out of the court room.

First aid, then ambulance staff, arrived and some 20 minutes later a by then calm and conscious Mr McMaster was stretchered from the court room in a sitting position.

What appeared to be causing him so much grief was the grilling by a sometimes incredulous Mark Costello, counsel assisting the commission, as he probed Dover’s controversial attitude to recruitment and corporate responsibility.

The court heard how Mr McMaster had signed three financial planners who were all under very dark clouds of client complaints. They were Adam Palmer, who had worked for AMP’s now defunct Genesys offshoot, Julie Hamilton, a planner with the Commonwealth Bank, and Koresh Horton.

When Mr Palmer was signed up to Dover he claimed to have been subject to complaints at AMP relating to his paperwork not being up to standard when in fact the concerns were over compliance and ethics.

That difference Mr McMaster dismissed as “just being a historical fact” and said that organisations like AMP did not like advisers putting clients into real estate because it conflicted with their need to sell funds.

“A poor performance check is actually quite normal in this situation. We rarely see a positive reference check coming from an institutional AFSL [advisory group].”

Ms Hamilton was taken on at Dover despite the fact she was under investigation and suspension by CBA for misconduct. In an email to Mr McMaster asking for a job, she wrote: “Hey Terry, on Monday my world imploded … I had a teleconference with the head of compliance and state manager for [CBA subsidiary] Financial Wisdom” and detailed her problems further.

Dover hired Ms Hamilton in 2014 despite knowing CBA was to report her to ASIC with “serious compliance concerns”.

“You were quite content to appoint this lady on the very day she told you that,” Mr Costello said.

Eventually Ms Hamilton was disqualified by ASIC from November 2017 but Mr McMaster continued to support her, saying he had no complaints from her clients.

“Julie doesn’t have clients anymore, does she?” Mr Costello observed.

“No, I take your point,” Mr McMaster replied.

Mr Costello painted a picture of what he said was Dover’s duplicity in dealing with clients. First he quoted the Corporations Act which holds financial services licensees responsible for the acts of its representatives.

Then he read from the group’s customer protection policy which Mr McMaster claimed was designed to protect the interests of its clients.

“Under the Corporations Act, Dover is not responsible for anything done by your adviser which is not within the authority provided by Dover,” he read.

“That’s a lie, isn’t it?” Mr Costello asked pointedly. “I put it to you it is Orwellian to describe this as a client protection policy.”

“The entire intention of this document is to minimise Dover’s liability for the work of its authorised representatives.”

It was soon after that Mr McMaster collapsed.