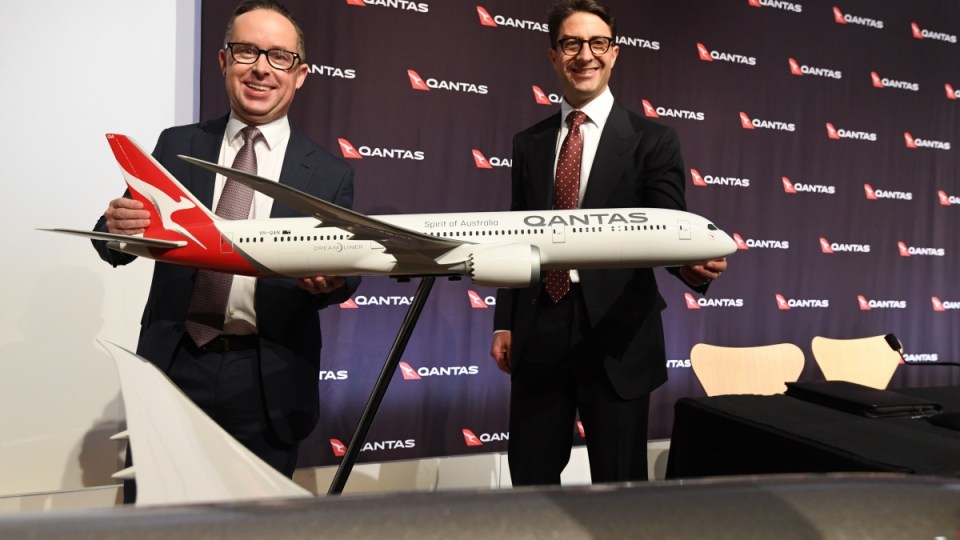 Qantas' chief financial officer Tino La Spina (right) was one of the executives at the hearing. Photo: AAP

Executives from Qantas, Woolworths and meat processing giant JBS were called before a Senate committee hearing on Tuesday to answer questions about a “vague, two-sentence” commitment to “invest more in Australia”.

The commitment was made in a short letter to the Senate last month. It was written by the Business Council Australia – also present at the hearing – and signed by the three companies, among others. 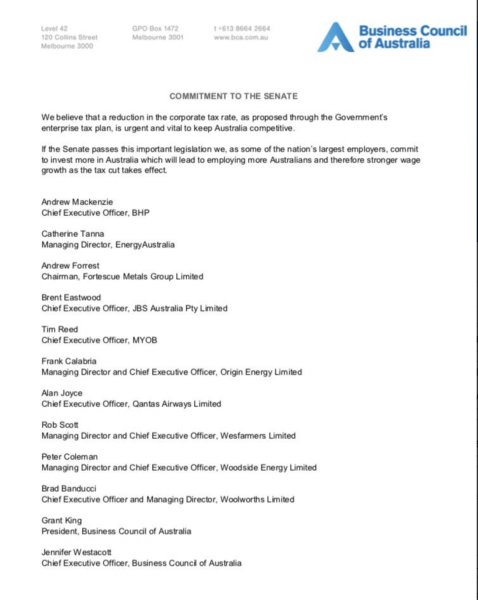 The vague wording of the letter prompted criticism at the time, with key crossbench senator Derryn Hinch saying: “The Business Council letter was very ‘kumbaya’, you know, we’ll do this and we’ll do that, but it didn’t guarantee anything.”

But the executives refused to commit to lifting wages in return for tax cuts, prompting a heated response from one of the interrogators, Labor senator Kristina Keneally.

“All we’ve got is a vague two-sentence commitment from the Business Council … asking us to forego $65 billion in revenue,” she said.

“And I am fairly certain not one of these business executives would forego $65 billion in revenue based on the vague two-sentence commitment that we have received.”

That $65 billion figure referred to the amount of tax revenue that would be lost if the company tax rate was slashed from 30 per cent to 25 per cent – a government policy that has so far been blocked in the Senate.

After facing questions on why they wanted a tax cut, the executives were asked point blank: “Will it naturally follow that there will be an increase in wages for employees?”

In each case the executives gave long, jargon-heavy, euphemistic and evasive answers. Only Woolworths’ representative came anywhere close to answering the question.

Here are their answers in full.

“I would say take us on our track record in recent years. How we are investing in terms of product, in terms of our workforce, in terms of shareholders, which are mum and dad investors and superannuation funds. And that’s why we believe we get those options when we get additional surplus funds available to us to invest.

“Higher investment creates more jobs. With jobs comes growth, which provides great opportunities for new employees as well as current employees. Reiterating [the] point about training, the more skilled our team are the higher the wages. We’re very proud of the fact that we’re one of the best payers within the retail industry, and we would see that continuing. So there’s an element of meeting the market, and an element of affordability; but we would see as a consequence of the first two, it flowing through to wage growth, yes.”

“We’ve got a strong track record of industrial relations in this country, and through collective agreements, and they’ve worked well for us and they will continue to work well. Linking productivity improvement to wage increases is one facet of that. But I turn the coin over. The question around will it flow through and put it back to the senators and the government. A do-nothing approach will put Australia significantly out of whack with the rest of the world. We’ve seen the US at 21 per cent [comapny tax rate], the UK at 19 per cent, going down to 18 per cent next year. So you’ve got to look at it and the metrics of how competitive, or how out of pace will Australia be if we don’t move on corporate tax rates in this country.”

Senator: “So just to be clear, will corporate tax cuts flow through to wages at JBS?”

JBS executive: “The flow through [to] wages will be covered in terms of increased productivity, increased investment, the strength of the economy. For us, we are as I reiterate, as a company we continue to compete for capital globally. So Australia’s got to be able to justify further investments going forwards.”