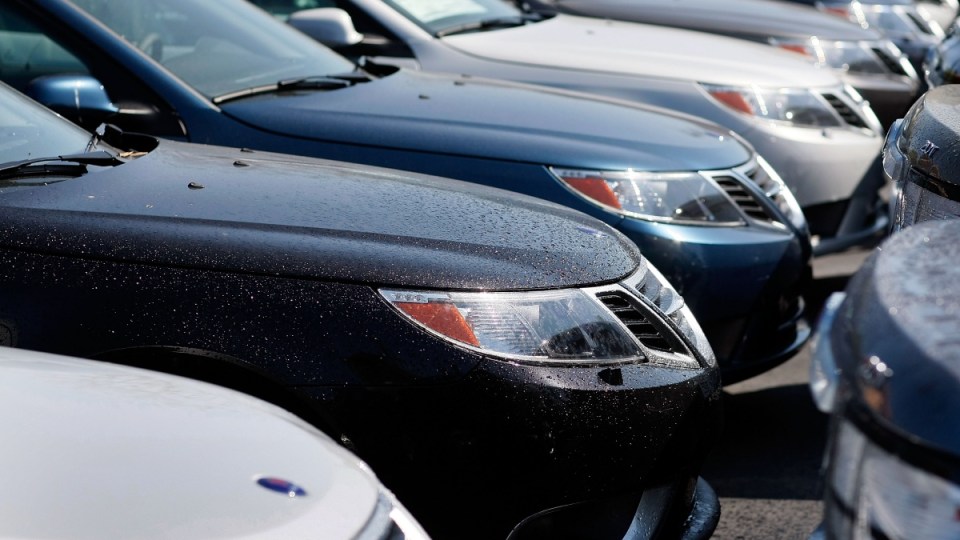 Aussies are buying cars in record numbers, but how are they paying? Getty

The year 2017 set a record for new car sales in Australia, with well over a million factory-fresh automobiles hitting the bitumen.

That raised the obvious question: With wages stagnant and housing debt at ridiculous levels, how are Australians funding this boom?

In an effort to answer that question, The New Daily waded through reams of data from the Australian Bureau of Statistics.

We found that in the 12 months to November 2017, Australians borrowed more than $16 billion specifically to buy motor vehicles.

Of that, $8.5 billion was used to buy new cars, $6 billion was borrowed to buy used cars, and the rest went on other types of vehicles.

That $16 billion figure may sound like a big number – after all, it could buy a new Maserati for every 200 or so Australians.

But is it really such a lot? To answer that, context is all-important.

If the figure was distributed equally between every single Australian, then each of us would have taken out a car loan of around $670 in 2017.

Compare that to housing. In the 12 months to November, Australians borrowed a massive $247.7 billion to buy properties.

That works out as $10,320 for every man, woman and child in Australia.

In other words, Australians borrowed more than 15 times as much to buy houses as they did to buy cars.

The dramatic shift in borrowing habits

Fast forward two decades, and the value of home loans dwarfs that of personal loans by more than three times. 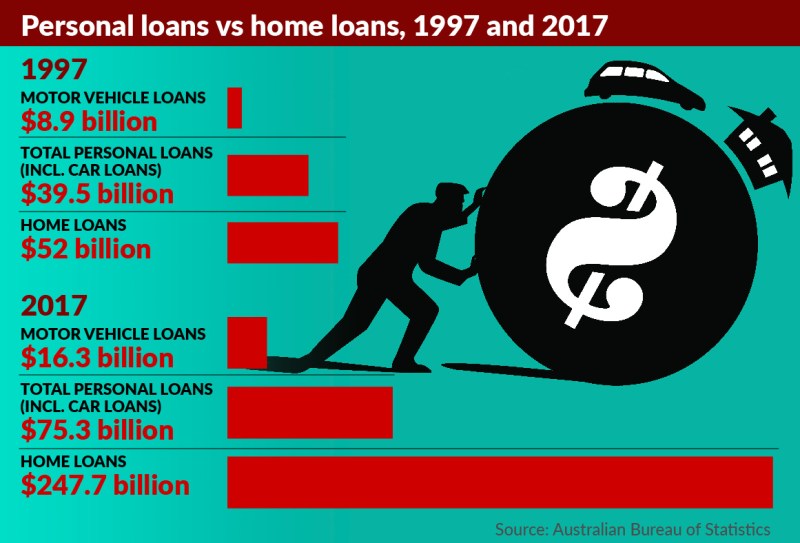 The amount borrowed on car loans in 2017, meanwhile, was just double the figure in 1997.

The amount borrowed on home loans shot up by nearly five times.

Economist Saul Eslake told The New Daily that, if you focus on net debt (i.e. take into account repayments as well as new borrowing) and look at the past 10 years, the amount borrowed on personal loans had actually decreased.

That means Australians are paying back more than they are borrowing.

So does that mean we are simply not borrowing as much to buy cars as we used to?

Not necessarily, according to Mr Eslake. Rather, he said it suggests that people are using their mortgages, not specialist car loans, to finance car purchases.

“A proportion of the [huge rise in mortgage borrowing] reflects the fact that people now borrow through their mortgage to pay for things they used to borrow for separately,” he told The New Daily.

And he said it was pretty much impossible to find out exactly how much of mortgage borrowing is funding car purchases.

So, are Australians borrowing unwisely? Again, not really, according to Mr Eslake.

“There are clearly some individuals who have got themselves in way over their heads with credit card debt and payday loans. And there are some serious ethical questions there for lenders,” he said.

“But the amount of non-housing personal debt is not an outstanding systemic problem.”

According to comparison website finder.com.au, 20 per cent of new car purchases have a loan attached.

Finder reports the average new car loan interest rate is around 6.3 per cent.

With the average financed car selling for $35,797, finder estimates $536 million will be paid in new car loan interest in 2018.

Identifying the biggest car loan providers is tricky because the big lenders don’t break down their personal loans on their annual reports.

But the biggest personal loan lender in Australia is NAB, which finder.com.au reports currently has just under $20 billion in outstanding personal loans on its book.