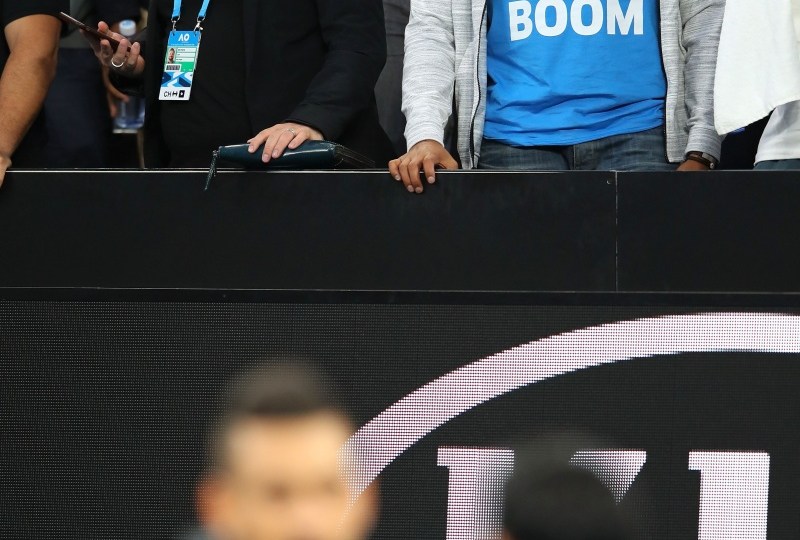 Christos Kyrgios has been wearing Sportsbet t-shirts and Channel 7 isn't shying away from giving its sponsor extra attention. Photo: Getty

Sports betting and gambling businesses have rushed to advertise during the Australian Open for “the last hurrah” before the government imposes new advertising restrictions on live sport coverage in March.

On at least 20 occasions throughout Kyrgios’ straight-sets win over Serbia’s Viktor Troicki on Wednesday, Channel Seven cut to a close-up shot of Kyrgios’ brother Christos wearing a Sportsbet t-shirt in the players’ box.

The company employed the same trick earlier in the week when Christos wore the shirt during his brother’s Monday match.

In addition to coverage of the stunt, three Sportsbet ads appeared within the first 50 minutes of Kyrgios’ Wednesday match.

While sports betting and other gambling-related advertising is highly concentrated during evening TV timeslots, on Tuesday afternoon Channel Seven live crossed to a Sportsbet market update during the tennis coverage itself – as opposed to during an ad break – despite being paid content.

Meanwhile, Lottoland has opted to advertise in a format mimicking that of a breaking news flash, sprinkling the ad during the evening news this week.

The Alliance for Gambling Reform’s Stephen Mayne said while these ads are likely not in breach of current regulations, Channel Seven should be actively restricting these kinds of gambling ads.

“This is the last hurrah for the industry before new restrictions come in. This season will be the worst ever. This is peak sport gambling,” he told The New Daily.

“TV stations are desperate to hold on to advertising – and standards are dropping.

“It’s disappointing Channel Seven feels this is appropriate given tennis is a form of family entertainment; far more than horse racing.

“I think it’s fair to say Channel Seven is definitely the worst network when it comes to gambling ads – throughout the footy season, the racing season and now they’re continuing with the tennis.

“There has been less gambling on Channel Nine during the cricket. Seven pushes the envelope more than other networks.”

Mr Mayne said Sportsbet has been the “worst offender”.

“Surely one ad per ad break for one company is enough,” he said.

“It’s ridiculous that we’re seeing two and sometimes three in an ad break during prime time television when families are watching.

“Gambling harm is at record levels in Australia, growing at double the rate of inflation. Australians lost $900 million to sports betting last year.”

He said Sportsbet had gloated last week in media reports that it has an operating profit of “nearly $200 million”.

The New Daily understands Sportsbet has spent $1 million on an advertising package during the Australian Open, while Lottoland has paid $1.2 million.

A Lottoland spokesman confirmed it would spend “close to the estimated figure across Seven West Media over the entire month of January”, admitting it had increased its advertising spend compared to last year.

A Sportsbet spokesman did not respond to The New Daily‘s request for comment on its advertising spending and market update live crosses during the Australian Open.

It instead provided the following statement: “As long-term partners we are thrilled to be part of the Seven Network’s 2018 Australian Open telecast. Our punters love getting involved in the tennis and summer is a great time in our sporting calendar.”

Mr Mayne warned even when new advertising bans are imposed from March, there will continue to be many loopholes that gambling companies will exploit.

The ban will restrict gambling ads from five minutes before the start of a match until five minutes after the match, and before 8.30pm. However, there are some exemptions for sports considered to be “long form”.

“A live cross during sport coverage should be considered an ad because it’s paid content. It wouldn’t be allowed during a footy game.

“There are many games played late into the evening (after 8.30pm), so the restrictions are going to be very easy to get around.

“But some of what they’re doing now, we won’t be seeing that next year.”

Channel Seven did not respond to The New Daily‘s request for comment.