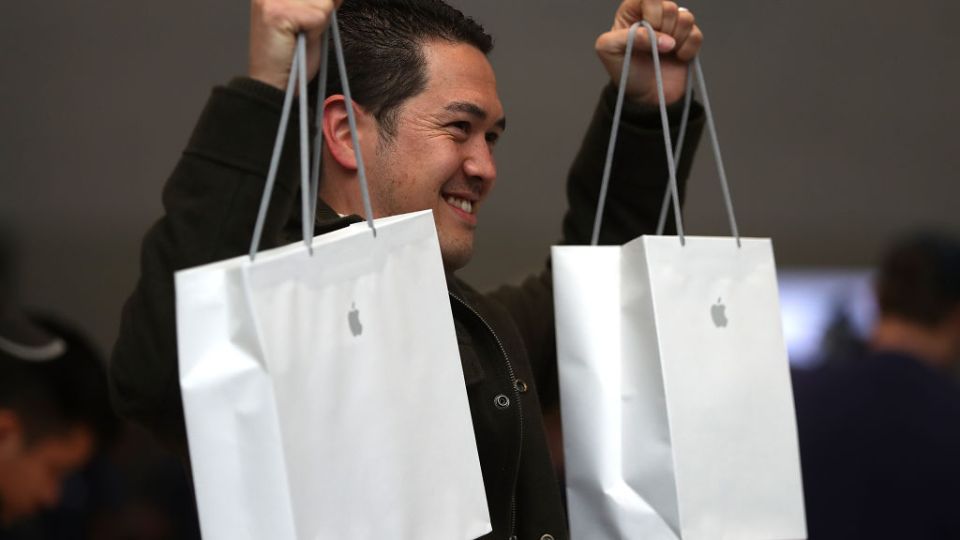 iPhone X buyers who spent thousands in November will have gone into Christmas with empty pockets. Photo: Getty
analysis

At first glance, news that Australian shoppers had beaten growth forecasts by a factor of three with their November spending might have set hearts fluttering in finance-land.

The adrenaline rush won’t have lasted long, however.

Economists had expected a 0.4 per cent increase in spending in the month, which actually came in at 1.2 per cent.

The Australian Bureau of Statistics poured water on that result, however, by stressing that the surge was largely driven by Apple fans rushing to buy the newly released iPhone X.

To that extent, it’s a bit fake. Those who splashed out will have gone into Christmas with at least $1600 less in their bank account, which means the December figures will probably be subdued.

The once mighty consumer is currently recovering from a long period of tight-wallet syndrome, which is not what we need.

The question, then, is whether the retail figures contain any genuinely good news once the Apple-fanatics are stripped out.

Clothing, footwear and accessories spending accelerated 1.6 per cent in November, compared with 1 per cent in the previous month.

Hardware, building and garden supplies went from zero to 1.8 per cent over the same period.

And the snappily named ABS category of ‘furniture, floor coverings, housewares and textiles’ grew by 1.2 per cent, when it had shrunk by 0.6 per cent in October.

So the non-fake bit of the news was pretty good overall, buoyed partly by Australians increasingly joining in the American-inspired ‘Black Friday’ sales in November, rather than waiting for December’s Boxing Day sales – another reason December figures might look weaker.

For a federal government trying to build a narrative around its new ‘Let’s keep Australia working’ slogan, November’s strong headline retail numbers will be very welcome.

For a start, the retail sector currently has the second-highest number of job vacancies advertised – 12 per cent of all ads according to the ABS – behind administration and support services, which account for 18 per cent of ads.

Pan out to the bigger picture, and the government can boast of the strongest overall jobs growth since 2005, good company profits and tax revenues ahead of budget forecasts, and ‘almost-trend’ growth in the economy more generally.

That’s not to say this burst of optimistic numbers will necessarily last.

Beyond our shores huge and historic changes are afoot that could quickly change the outlook for Australia.

Chief among these is the rising cost of borrowing in global bond markets. That’s a topic for another day, but the short version is that rising borrowing costs will ripple through the richest nations, including the US and Europe, with knock-on effects for our biggest trading partner China.

That’s not to forecast certain doom, just a reminder of the fragility behind the current milk-and-honey period of low interest rates, accelerating global growth and booming stock markets.

Putting all that together, a nervous government would be looking to convert good economic data into political capital as soon as possible, and take the rosy story to an election before any serious cracks can appear.

That’s the main reason there is more and more talk in Canberra of an early election in October – just a few months after the next federal budget, in which the government should reveal a few spare billions in unexpected tax revenue to splash around in the form of tax cuts.

So fake news or not, the booming retail figures released on Thursday are another reason the Turnbull government should be preparing for an early election – not so much making hay while the sun shines, as sending the right message while the iPhones ship.

The shopping boom is fake, but the real news is good