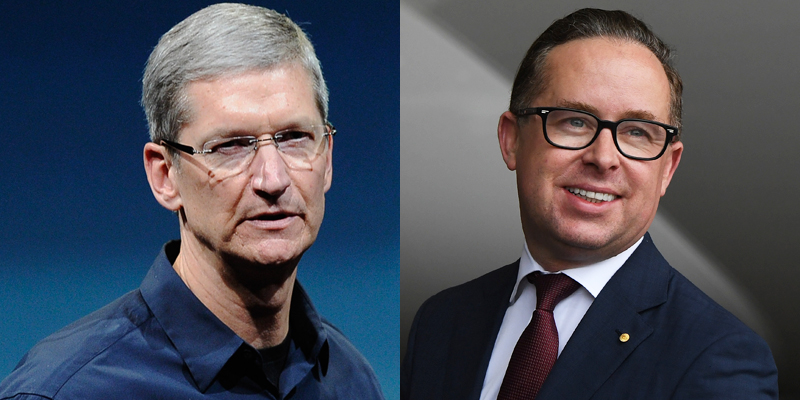 Mr Joyce was paid $A25 million this year to Mr Cook's $A16.4 million. Photos: Getty
analysis

CEO salaries continued to astound in 2017. If Australia’s biggest companies have a formula that would readily explain stratospheric salary packages for CEOs, such as this year’s whopping $25 million paycheque for Qantas CEO Alan Joyce, they aren’t saying.

The usual trite explanation in the face of community – and indeed institutional investor – unease is that Australian companies must offer “globally competitive” salaries if they are to attract the best CEOs.

If that was ever a reasonable proposition the argument lost some of its lustre when it was revealed this week that Tim Cook, CEO of tech leviathan Apple, received remuneration of $US12.8 million ($16.4 million) this year – well short of Mr Joyce’s pot of gold.

Mr Cook’s salary is no less eye-watering, but it does make for an interesting benchmark. Granted, one must be wary of comparing oranges with, well, apples. However, juxtaposing the remuneration of Mr Joyce and Mr Cook highlights that setting CEO salaries is an inherently arbitrary process.

That arbitrariness was nowhere better illustrated than at Australia Post this year. CEO Ahmed Fahour, who retired in February, received a total of $10.8 million in the 2017 financial year, comprising annual remuneration of $6.8 million plus $4 million in long-term incentives.

Mr Fahour’s remuneration was set by the Australia Post board which, giddy-eyed at the prospect of having the former CEO of Australian operations at NAB, stumped up with the big bucks. Such was the public backlash against Mr Fahour’s salary that Prime Minister Malcolm Turnbull stepped in “to ensure that the [next CEO’s] salary is proportionate to the task at hand”.

The brunt of that decision is worn by new Australia Post CEO Christine Holgate, previously CEO of listed vitamins company Blackmores. Her annual remuneration will commence at a capped $2.75 million.

There is no reason to suppose that Ms Holgate will be any less effective than her predecessor despite the thinner pay packet.

Boards are not entirely insensitive to community unease about heady remuneration levels, and in particular the role of bonuses and incentives driving up CEO remuneration, which has helped Alan Joyce’s pay almost double from $13 million in 2016 to become Australia’s highest paid CEO this year at $24.6 million.

Incentives are murky terrain and in the past it has seemed that less-than-stellar performances by CEOs have still been rewarded with generous add-ons. This year, the CEOs of Telstra, Commonwealth Bank, AMP and Seven West Media were among those to miss out on lucrative bonuses. Telstra CEO Andy Penn’s pay of $5.2 million, still noteworthy, represents a clip of $1.6 million on the previous year. And Commonwealth Bank CEO Ian Narev’s pay for the year was reduced from $12.3 million to $5.7 million.

CEO super salaries have long been a sore point in the community but they are especially grating in the current economy, ostensibly a growing economy but one which since the global financial crisis has offered little reward for wage earners.

Whatever restraint is evident in some companies, every sign is that corporate Australia remains wedded to the incentives-laden model for CEOs. One need look no further than Mr Joyce’s bumper pay packet: his base pay was $2.1 million.

Most Australians would reasonably ask why a CEO on a good wicket should be additionally rewarded for doing his or her job?

A report by corporate adviser Conrad Liveris shows that CEOs of ASX100 companies earn an average of $4.75 million. Over the past 12 months, CEO earnings have grown 46% faster than average earnings for Australian workers.

These are sobering statistics for workers whose financial security has been nobbled by persistent record-low wages growth.

So here’s a thought. If Australian companies insist on retaining their generous CEO remuneration regime they might at least extend their appreciation of a job well done beyond the C-suite.