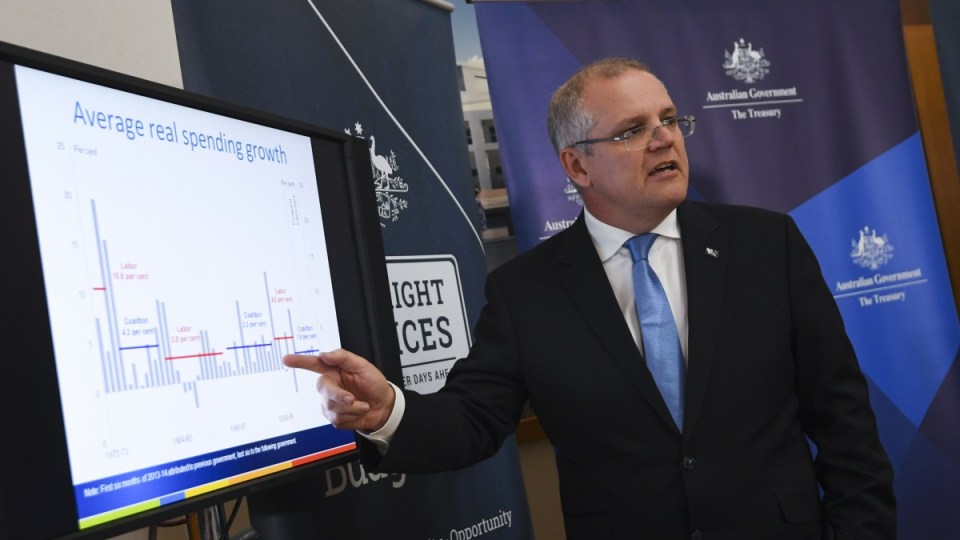 Treasurer Scott Morrison has an extra $3.6 billion in tax revenue to play with. Photo: AAP
analysis

A big opportunity was missed in Monday’s mid-year budget update, with the government failing to provide any more detail on middle-income tax cuts alluded to by the Prime Minister in November.

While there are political reasons for holding the full detail of any cuts until the May budget, consumers desperately need good news right now in order to lift confidence and get household consumption moving again.

As reported previously, consumption spending, particularly in the retail sector, is going through something of a near-death experience.

Business leaders are well aware of that fact, and so poor household consumption figures are feeding through to lower-than-hoped-for business investment.

It’s a vicious circle that needs to be broken if the economy is to escape the current phase of super-low inflation and flat wages growth, both of which are reflected in lower growth forecasts in the mid-year economic and fiscal outlook (MYEFO) statement.

That is weighing on nominal economic growth which last May was expected to hit 4 per cent this financial year, but is now expected to come in at just 3.5 per cent.

Even without firm figures, MYEFO offered an opportunity to renew Malcolm Turnbull’s November claim that he was “actively working with the Treasurer and my cabinet colleagues to ease the burden on middle-income Australians”.

But by failing to give any firm indication that tax cuts are on the cards, the Turnbull government is open to Labor’s attack over its tax increases – especially the rise in the Medicare levy from 2 to 2.5 per cent planned for July 2019.

Labor responded to the MYEFO statement by contrasting the lack of middle-income tax cuts, with a number of free kicks given to wealthier Australians – lack of action on negative gearing and capital gains tax concessions, lack of action on family trust tax dodges, and the government’s staged series of corporate tax cuts.

So while Labor is howling “tax cuts for the rich” and “tax increases for workers”, Mr Turnbull and Treasurer Scott Morrison have little to fight back with.

Instead, the government is asking voters to jump for joy at the prospect of the federal budget returning to surplus, as promised, in 2020-21. Do households struggling to cover rising food and energy bills even care about that abstract goal?

The MYEFO statement shows what a good 12 months we’ve just had.

Strong profits in the mining and banking sectors are expected to help net the government an extra $3.6 billion in tax revenue in 2017-18 alone.

While conservative accounting suggests that windfall should be held onto in order to ensure the government hits its surplus target, the truth is that managing an economy has very little to do with balancing the budget.

The acrimonious politics of the past few years have convinced Australian voters that eliminating federal debt is our central economic challenge, when it simply is not.

Net debt is set to peak at 19.2 per cent of GDP next financial year, which compares very favourably with other developed nations – the US net debt is 73 per cent of GDP, Britain’s is 87 per cent, Germany’s 69 per cent and Canada’s is 31 per cent.

In that context, the MYEFO statement could have done so much more.

To be fair to the government, it has largely complied with calls from the International Monetary Fund and others not to slash spending and to use targeted infrastructure spending to boost employment.

The Abbott government’s austerity budget of 2014 is now little more than a bad dream, and the Turnbull government is using public spending to boost the job market – the notable exceptions in MYEFO being $2.1 billion in cuts to the tertiary education and $1.2 billion cut from social services.

What the economy really needs is a boost of confidence among lower- and middle-income Australians.

By focusing on balancing the budget, ignoring tax cuts, and cutting education and social services spending, that is precisely what this MYEFO statement fails to do.