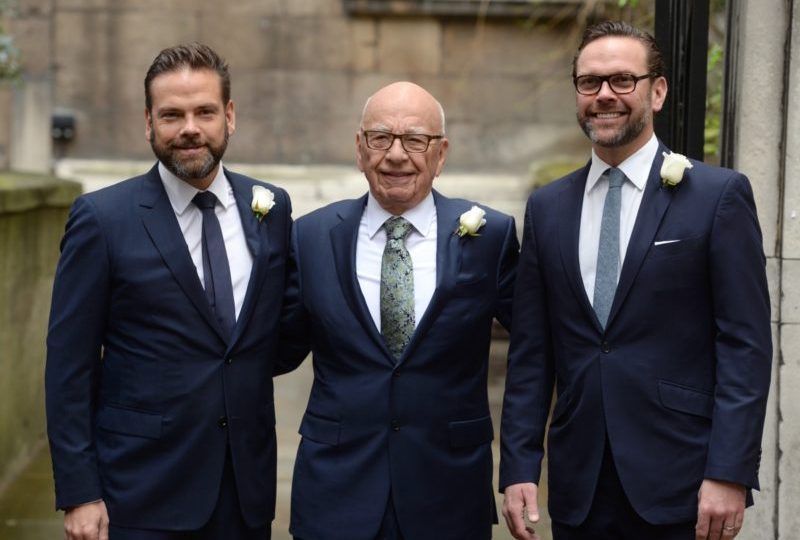 The days of unchallengeable Murdoch power are numbered. Photo:AAP

The sun could finally be setting on the Murdoch media empire as two developments suggest the power of the family that has made and broken governments and fashioned the news and entertainment pallets across the world is waning, analysts say.

One was the news that long-time Murdoch ally, Saudi Prince Al Waleed bin Talal, sold off his 6.6 per cent stake in 21st Century Fox after being arrested in a corruption crackdown and power struggle in his own country.

That loses the Murdochs a valuable voting ally in the company they control with a 38 per cent voting stake and only a 17 per cent share holding.

That alone might not be so significant without the other piece of news: Discussions with movie giant Disney on selling it most of 21st Century Fox’s assets. The deal did not go ahead and Lachlan and James Murdoch refused to discuss it with the company’s strong first quarter report.

But it sure attracted lots of attention.

“For Rupert Murdoch to consider selling is a reversal of his approach to life for the last 86 years: his drive to buy more and often make very big acquisitions,” said seasoned analyst Peter Cox of Cox Media. “If he’s even considering selling that’s a very big change.”

The Murdoch empire was split into News Corp (papers and Australian pay TV and digital property) and 21st Century Fox (film studios and TV in the US, Asia and Europe) in 2013 because the latter was seen as having the greatest growth potential.

“Film hasn’t had a good couple of years and TV production is becoming very competitive,” he said.

“Where Rupert Murdoch once dominated you now see Netflix and giants like Amazon and Google going in and buying top directors and production teams.”

Part of the Murdoch food chain plan was to use its pay TV networks to distribute what its studios produced but that model is being challenged by the likes of Netflix and YouTube.

“If you look at the big overseas markets that had close to 100 per cent penetration of pay TV you now find young people don’t take up subscriptions,” said telco analyst Paul Budde of BuddeCom.

“If you look at that and the various other types of digital disruption you see that the gilded age of the media barons is ending. That’s not the way you print money any more.”

Mr Cox said the change of strategy probably indicates that Mr Murdoch’s sons James and Lachlan “forced his hand and he wouldn’t necessary like having his hand forced”.

That could indicate the once overarching power of Mr Murdoch, not one to turn easily, is on the wane.

And if the Murdochs are looking to get out before the music stops, what will they do with the $30 billion a selldown would liberate?

“James is interested in the digital world and seems desperate to buy the rest of [European pay TV group] Sky. But that business is being disrupted and would it be a good buy? Rupert mightn’t think so.

“Lachlan seems to be seeing things more like his father and has his own [traditional] media interests in Australia like Nova and [a former stake in] Ten.”

If the business model and the family are fraying and a major ally has sold his stake it could be very hard for the next Murdoch generation to retain Rupert’s once iron grip.